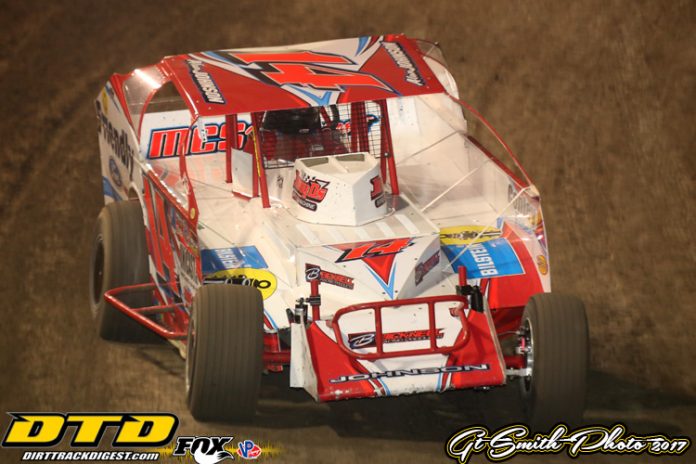 Son of the late Milt Johnson, whose B&M Speed Shop built big power for the likes of Richie Evans, Jerry Cook and Merv Treichler, Alan had a handle on speed from the start. He was 16, with a bunch of snowmobile and motorcycle championships already under his belt, when he buckled straight into a full-blown big-block Modified at Canandaigua: no entry-level hobby racing for this boy.

“He had the talent. You knew right out of the box that Alan was going to be good,” said former DIRT promoter Glenn Donnelly, who can remember Johnson as a 12-year-old, back when Glenn and Milt partnered in a competitive snowmobile.

“He was 16, running against Will Cagle, all those seasoned vets,” Donnelly continued, recalling young Alan’s brash confidence behind the wheel. “He wasn’t about to run second. Ever. And he’s had a career in our sport that’s pretty close to being second to none.”


Starting with his first score in that Corvair-bodied #14 in 1975, “A.J. Slideways” has won at least one Modified feature event every single year since — an unbroken win streak stretching an extraordinary 43 years and counting. As of April 21, Johnson’s career win list stands at 544, with triumphs at 39 tracks in seven states and two Canadian provinces. With smooth driving and superlative consistency, he took down the titles, too: five-time Super DIRT Series champion, four-time overall Mr. DIRT, four-time Mr. DIRT 358, four DIRT 358 series championships, nine titles at Weedsport, eight at Rolling Wheels, five at Canandaigua, four at Brewerton, three Mod and two 358 crowns at Ransomville, one BB and three SBM championships at Fulton, one each at Waterloo and Merrittville, a deuce on the Florida tour, and the Texas DIRT title. Significantly, Johnson owns 57 wins on the Super DIRT Series circuit, four Victoria 200s at Fulton, and the crown jewel Eastern States 200. He is the second winningest driver in DIRTcar history.

And of course, the cherries on top of that sweet list of accomplishments are Alan’s three big Super DIRT Week scores on the Syracuse mile: in 1983, with Tico Conley; in ’89, with Conley and Rich LeFrois; and ’03, driving for Elaine James Motorsports.

But it wasn’t just Johnson’s driving skills that factored into his capital success, according to car owner and long-time friend Tico Conley.

“Back then, he was way ahead of everybody else,” Conley said of the early 1980s, when he and Alan were tearing up the tracks. “Not so much in driving — Bob (McCreadie) was just as good; Hearn and Horton had better equipment. But Alan was always experimenting, always trying something new. Whether it worked or not, he wasn’t afraid to cut up a winning car to try to make it go better.”

It was Johnson’s ingenuity in rethinking an old Show Car chassis Conley had in his garage that wound up — well, it outright revolutionized the sport.

“The way it was, the driver sat off to the left and the motor was offset to the right. We cut the roll cage right off it, cut the rear suspension out of it, put the motor in the middle and the seat over the driveshaft. We offset the car at least six inches,” Alan remembered. “The offset wasn’t so much in my mind as widening it. And we didn’t have any money, so we left the left-rear alone and bought a right-rear tube and right-rear axle. We couldn’t afford ’em both so we just widened the right side.

“It was nothing new,” Johnson pointed out. “Chuck Ciprich, 12-13 years before I was racing, had offset cars. Other guys, too. It’s just that we had the most success with it.”

In 1980, Alan won 20 times in Tico’s radical mount, establishing himself as a not-to-be-messed-with contender on the DIRT circuit. And that winter, when NASCAR driving great and noted asphalt car builder Maynard Troyer decided to branch out his business to include dirt Modified fabrication, he used that car, with all of Johnson’s basic ideas, as a template for his Mud Buss.

Alan had also reconfigured the suspension on that prototype, spending days turning down the torsion bars on a lathe to make them as small as possible, and swapping in a lighter spring on the right-front. “It was probably the first car in circle track racing that had a lighter right-front spring than left-front spring,” Milt Johnson observed at the time. “Between the smaller bars and the right-front spring was the secret to the Troyer car. Anybody could get in it and it’d get good traction and turn left.”

Alan clicked off another 28 wins in 1981, won the overall Mr. DIRT title among other championships, and sent his competitors scrambling to Troyer with orders. In 1982, Johnson and Conley won 32 times in their Troyer car, grossing $150,000 — no paltry sum for a short-track team to tote up in a year’s time.

“If you don’t change things, you’re never going to do any better.”

That is still Alan’s mantra to this day; a deep-set conviction that pushes him forward, forces him to challenge himself, find a new way to go faster. It is why, in 1983, he traded in the proven Troyer for an untried Show Car design. And went right out and topped his previous season: 28 feature wins, the Mr. DIRT and Super Series crowns, the Florida swing, three track titles, $200k in winnings — and his first Schaefer 200 at Syracuse.

“He’s a smart chassis guy, that’s for sure. We’d be driving down the road, coming off a win, and Alan would be dreaming up some new way to make the car better,” said Hall of Fame mechanic Mike Hillman Sr., who was Johnson’s crew chief in the early years. “His ideas worked about half the time — but he was always thinking and that’s what made him successful.”

Could Johnson have made the next step up, to test himself in touring Sprint Cars, NASCAR national classes, bigger arenas, like Treichler, Horton, Hearn, Pauch and many other drivers of his caliber did? Of course he could have. But he didn’t.

“I really never had the desire. And the opportunity never popped up, especially in this neck of the woods,” Alan reflected. “And being the introvert that I am, it wasn’t in me to get out there and mingle and make contacts. Anyway, it’s hard to leave your comfort zone — especially if you’re doing well.”

Mike Hillman knows all about taking that leap of faith: In 1986, he left the Northeast DIRT scene to become an accomplished crew chief, team manager, car owner and now consultant in all three of NASCAR’s top national series.

“Alan could have come down here, done anything he wanted to,” Hillman confirmed. “He’s such a smooth talent — one year, we ran over half a season before we had to replace a bumper or a nerf bar on the car!

“Alan understood those cars. He was so successful that it didn’t make any sense for him to go anywhere else,” Hillman bottom-lined.

In looking back on a Hall of Fame career, most drivers would reenact their victory lane appearances, relish the sparkle of the champagne spray, raise the triumphant checker, radiate in the blaze of photographers’ flash.

But Alan Johnson is a different animal. He breaks the sport down to its purest essence. What it is all about.

What matters to him happens in the cockpit. And it doesn’t have a lot to do with winning or not winning.

“When I went down to Reading in 1978 and passed (Kenny) Brightbill on the outside in the Daniel Boone race — that meant something to me!” Alan relived that heady adrenaline rush. “And the time I took the lead from Billy Osmun in the Ferraiuolo car in the 200 at Middletown before I dropped out. It was the one where Kevin Collins ran dry coming for the checker and Lou Lazzaro won,” Johnson recounted that vivid memory as if the race took place yesterday, not 38 years ago. “Passing Osmun made me forget all about our car failing.”