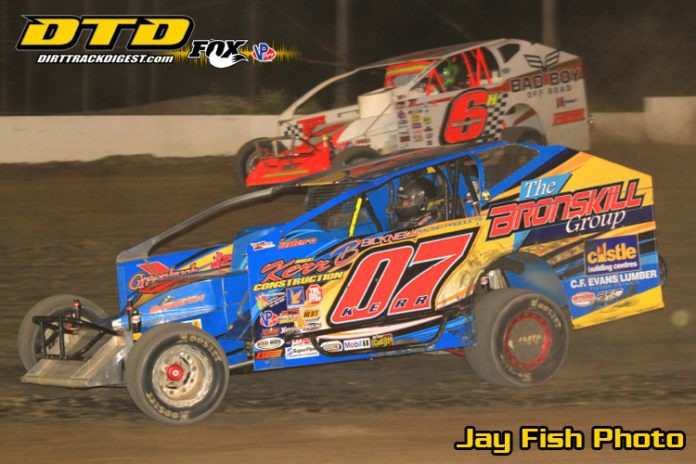 PICTON, ONT – Tim Kerr is excited to finally begin the 2017 season this weekend with a doubleheader at Brewerton and Fulton speedways. The Picton, Ont.-based team will travel to the Empire State weekly for competition at both tracks. Last weekend’s scheduled season openers were cancelled due to rain.

“We’re pretty excited right now just to get back in the swing of things,” Kerr said ahead of Friday’s lid-lifter at Brewerton. “Hopefully all the hard work over the winter paid off with the decisions we made.”

Kerr said he and his team were happy with last season’s progress and will continue to build off their finishing point from the 2016 season. The team made upgrades over the off-season, but for the team’s Bicknell Racing Products chassis with Enders Racing Engines under the hood remains in tact.

“We’ve got a couple of little things we’re working on,” Kerr said. “But we’re going to let some other people try some stuff before we get too much into anything. We’re pretty much where we ended [2016], with a few small tweaks. We’ll see how things go.”

Both Fulton and Brewerton feature a number of incoming drivers that will bolster an already impressive line-up of drivers. For example, former Super DIRTcar Series champion Billy Decker will now compete at Brewerton on Friday nights.


“Where we run weekly is pretty stellar and now you’re adding some of the top guys back to the deal,” Kerr said. “It’s always a pleasure to be able to run with these guys. They’re great racers and you always learn from them. I’m excited to race with them and everybody else again.”

Like any driver, Kerr wants to win each time he straps in to his Bronskill Group/Home Hardware Picton No.07. This weekend, however, is about running clean.

“We want to get out of there clean with no issues,” Kerr explained. “Hopefully we have everything the way we should and we get through the weekend with no major damage and a couple of Top-10s and get the season started off right.”

The entire team is eager to get back to the track after the long off-season. Mostly, Kerr and his team want to see their improvements in action and get into their weekly race season rhythm.
“Right now we’re just sitting here making sure we’ve got everything we need,” Kerr explained. “I’m more stressed about if we have everything in the trailer or if we’ve done everything right to the car. Even though we’ve been rained out for a, we’re still in the shop and I’m thinking of different stuff to look at. I’ve looked at it 20 times.”

As much excitement as opening night brings, Kerr is always quick to stop and thank those who made it happen.

“I want to thank all of the sponsors that helped over the winter and all the crew. It was a big help,” he added.

KEEP UP WITH KERR