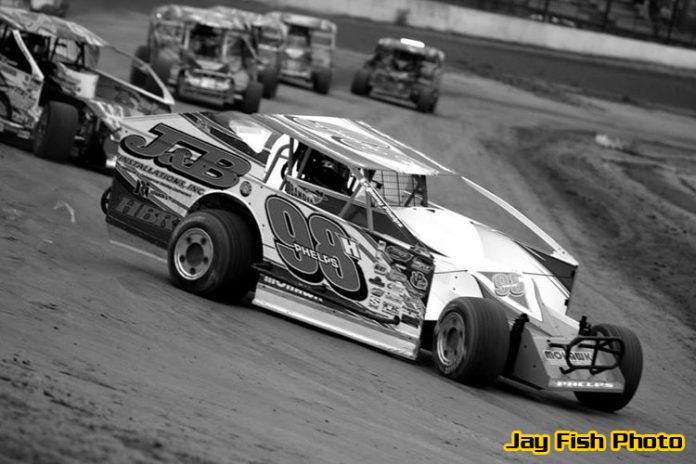 Jimmy Phelps and Max McLaughlin had a strong start at their home tracks this past weekend at Brewerton and Fulton Speedway for their season openers.

“We had two good nights,” Phelps noted. “Both nights the tracks were really tough.”

Phelps started second and finished second in his heat race, placing him in the second row on the outside for the main event.

“We were pretty even with Larry (Wight),” Phelps said, who won Friday’s main event. “It was one of those deals where if he hit a hole wrong we were right there but I’m kind of just happy that we survived.”


Phelps closed out the night with a solid second place finish.

“Saturday night was smooth, just really wet and narrow,” mentioned Phelps. “You just had to be on the top. You could make some ground up early, which we did. We got up to third. We did run the bottom and tried to carry enough speed to clear the guy but about halfway through the race the bottom started giving up and it became one lane.”

After a double file restart and falling back to the fourth spot, Phelps crossed the line in fourth.

Teammate McLaughlin had a rough start to his weekend on Friday night at Brewerton. McLaughlin was set to start on the pole of his heat race but was forced to start at the rear after having trouble starting the car.

“I climbed into the car and kicked the starter wire off,” McLaughlin said. McLaughlin was able to make it out in time but unfortunately ran into some more bad luck. “A car spun in front of me in the heat and I hit him so we had to change the front axle and a bunch of parts.”

Despite a rough start to his night, McLaughlin bounced back and drove through the field to cap off the night with a fifth place finish.

McLaughlin kicked off Saturday with a second place finish in his heat after starting fourth.

“I was running fourth in the feature when we got wrecked,” McLaughlin said. “The car wasn’t bad. It had more cosmetic damage than anything.”

McLaughlin noted he only had eight laps remaining in the feature after his incident on the track. “We went from 19th to 13th after that. We were at least a top three car. We had some terrible luck but we were fast enough to win both nights. It’s a good start.”

The HBR team will be making their trip South to Bridgeport Speedway on Tuesday, May 16th for the second Super DIRTcar Series race of the season.

JRi Shocks is a suspension solutions provider company located in Mooresville, N.C. that comprises over 100 years of collective experience in shock absorbers, hydraulics and electronics in professional racing and no racing applications. For more information, visit www.jrishocks.com

“It’s nice to know we have a company we can rely on to provide us with the best quality components,” Phelps noted. “They’re always a phone call away. It’s been a really good relationship the past couple of seasons.”

“I’ve been very happy with the car this year,” McLaughlin said. “The continued support from Teo has been outstanding. I wouldn’t want to work with anybody else.”