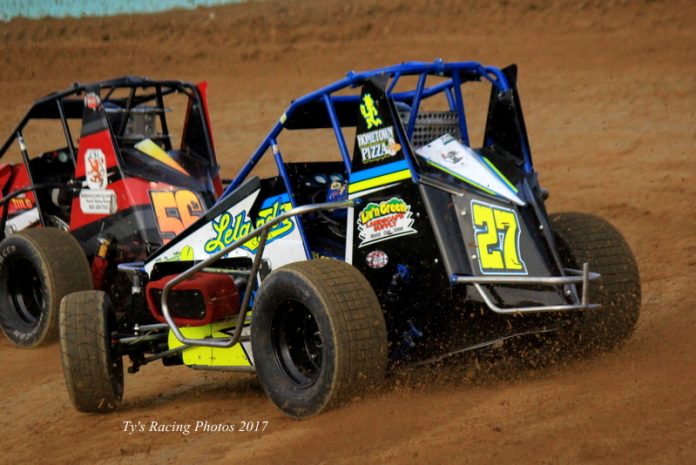 By MANDEE PAUCH RELATIONS
Between Billy Pauch Sr. and Jr., the Pauch Racing team picked up six top-ten finishes this past week.

Pauch Jr.’s weekend kicked off Friday night at Big Diamond Speedway. Jr. started ninth in his heat and finished third. The track was then hit with rain, forcing them to cancel. The makeup feature will be made up on Friday, June 9th.

Sunday was the Action Track USA season opener. Jr. timed fifth overall with a 30+ field of SpeedSTR’s. He started on the pole of his heat and won it, which put him in the top 12 redraw.

“I started third and fell back to eighth from a mishap in the middle of the race and ended up coming back through to win the 75-lap Tobias Classic,” he said. Jr. picked up a nice $5,000 payday.

In the 600 micro sprints, Jr. started seventh and finished fourth in the heat, missing the transfer by one. He then qualified third through the consi.

“I started 21st and ran ninth,” he said. “It was a very decent start, just drew a bad number out of 64 cars. That put us behind the eight ball.”


Tuesday saw Jr. compete against the Super DIRTcar Series at Bridgeport Speedway. Jr. timed fastest in his group session, which placed him on the pole of the heat race. He went off to win the heat.

“We missed the setup in the feature,” mentioned Jr. “We fell from the pole to seventh. It was our first race with Series this year. It’s always good running with those guys. We were definitely competitive; just need to work on some better things and get the car better for next time we go out.”

To close out the week, Pauch Jr. made his second trip of the week to Action Track USA Wednesday night.

Jr. timed third overall in time trials, placing him in sixth for his heat race. He crossed the line in third.

“I didn’t catch the breaks to get to the front in a hurry like we needed,” he said. Jr. placed fourth from his 11th starting spot in the 30-lap main event.

In the 600 micro’s, Jr. started ninth in the heat and finished fifth; missing the transfer by one. He then went on to qualify second in the consi from third.

Jr. started deep in the field for the 25-lap feature. He drove through from his 23rd starting spot to finish tenth.
“We seem to have a good car there we just need to start drawing better,” Jr. said.

Sr. timed second in his time trial group which lined him up second in his heat. He respectively finished where he started – in second.

A pre race redraw saw Sr. draw inside of the fourth row for the 60-lap main event.

“The car was pretty good,” he noted. “We got passed by Friesen and I passed him back. He runs over a hundred races a year versus my thirty or forty. We finished in front of him and the rest of the Dirt boys.”

Overall, Sr. was happy with his performance. “We were second best. Watt was definitely better than us. He was on his game. I didn’t really have anything for him.”

Next on slate, Pauch Jr. will be at New Egypt Speedway on Saturday, May 20th and Action Track USA on Wednesday, May 24th. Pauch Sr. will be taking the weekend off and will be going to Delaware International on Thursday, May 25th.

Bish Sales is the largest Husqvarna dealer in Central New Jersey, and one of the oldest dealers on the East Coast, stocking chain saws from 14 to 36 inches. Since 1970, Bish Sales has been providing top-notch service and low prices to arborists, landscapers, and homeowners in Mercer County and Hunterdon County, New Jersey and Bucks County, PA. For more information, visit www.bishsales.com

“Since joining with Mike, we’ve had a great relationship,” Jr. said. “He gives us all the tools there is to win races and I’m thankful to be a part of his team. “