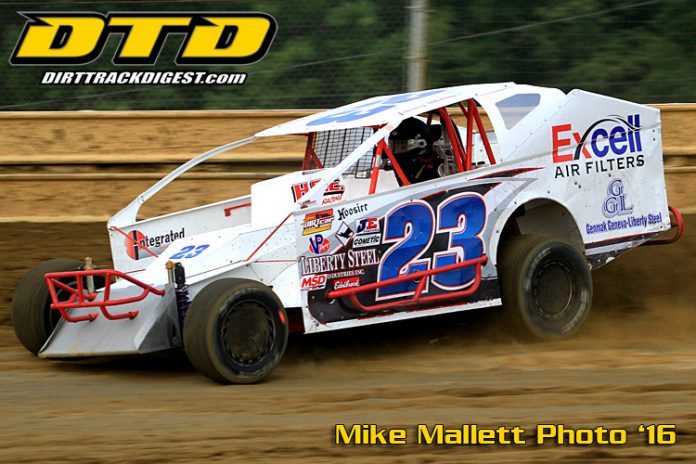 Britten rolled out ninth in his heat race and finished seventh. “The track was tough to pass on,” Britten said. “We missed the inversion by one spot.”

He then lined up 21st for the main event. Britten gained track positions early on until a restart around lap ten caused an eight-car pileup.


“It wadded up the front clip pretty bad,” Britten said. “I came in the pits to get it checked. The nose was bent down and there wasn’t much they could do about it so I went back out.”

Britten regrouped and fell in to the back of the field once again.

“Surprisingly, I still had a pretty good car considering how bent it was.” Britten drove his way back through the field and crossed the line in sixth place.

“Considering everything that happened, to come away with a sixth place finish, I’m pretty happy with that. I feel like we’re building up something pretty good up there.”

After driving three hours east to Albany Friday night and arriving home at two in the morning, Britten then traveled five hours west the next day for a surprise visit to Sharon Speedway in Hartford, O.H.

Britten started third in his heat and won it but was then cut short due to heavy rains canceling the rest of the evening.

After his first time behind the wheel of the No. 23 machine, usually piloted by Jimmy Weller, fans at the 3/8, high-banked, dirt oval will be seeing more of Britten on Saturdays.

“It wasn’t really the plan for me to be driving for them,” Britten mentioned. Weller has recently been slated by a back injury and won’t be able to return to racing for a couple of weeks.

“His dad races at Sharon and his family are part owners of the track so racing there is a pretty big deal for them.”

Weller was originally set to race weekly at Canandaigua and have Britten setup his car for him. With the recent turn of events, Britten will be jumping behind the wheel and making the trip West to Sharon on Saturday’s.

“Part of me helping them was to help them get better at Sharon so it was always in the plan to go down there once or twice to help them,” he said. “Now with Jim being injured we agreed that I may as well come down and run a few races in the car that way I can see what’s going on and hopefully get a couple of wins too and have some fun.”

Tuesday night was Britten’s first visit to the 5/8 mile, high-banked, Bridgeport Speedway. Britten started the night off strong by timing fastest in his timed group. He started on the pole in his heat and qualified second, placing him in the redraw.

“It was a good feeling to jump on a new racetrack and be on the pace right away.”

Britten redraw the outside pole for the 60-lap main event. “It seemed like the locals kind of knew what was going on and apparently I didn’t,” he laughed. “It’s one of them learning curves from never racing there before. The disappointing thing is, even though I dropped a couple spots at the start I was still ahead of pretty much all the Series guys but one.”

It was early in the race when Britten got hit by another car on a restart, causing damage to the steering box, forcing Britten to go pit side for the remainder of the race.

“I think it was around lap ten when the car was starting to get good,” noted Britten. “I think I may have had a pretty good car for the second half of the race. I feel like I have some pace with the car, I just need to make it to the end of the race without getting wrecked.”

Britten’s next race will be at Albany-Saratoga Speedway on Friday, May 19th, Sharon Speedway on Saturday, May 20th and Weedsport Speedway Monday, May 22nd for the third Super DIRTcar Series race.

Integra Shocks are always on top of the game. They have a state-of-the-art engineering team, getting the job done by designing and building innovative modifications and products to help at the track. With Integra’s full line of performance racing shocks and springs, you can count on them to bring just the right combination of suspension control for the demands of your racing conditions. For more information, visit www.integrashocksandsprings.com.

“I’ve worked on a lot of different shocks,” Britten noted. “To some extent you think a shock is a shock; you can valve it and tune it to whatever you want but it seems like with the Integra’s, there actually is a bit of a performance gain just in the design of the shock because of the couple of things they have going on. I feel like my shock package is better than it’s ever been.”