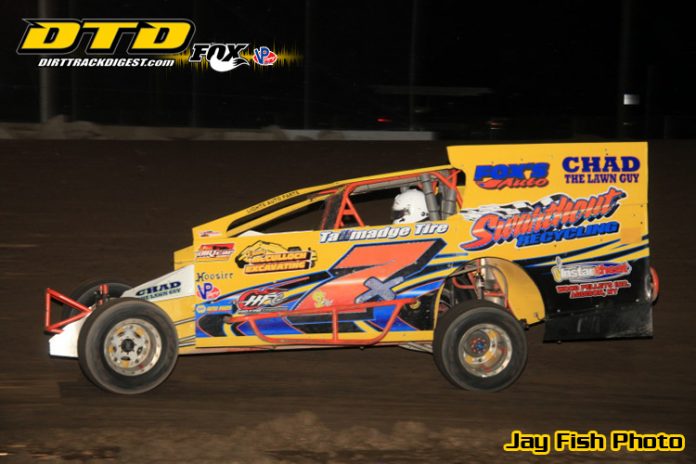 Like a lot of today’s stars, Paine was introduced to the sport as a child. His parents, Don and Nancy, owned a race car in the 1960s so Steve got his first look at the sport at age six at his hometown Waterloo Speedway and Weedsport. The Paines eventually sold out and thought they were done with racing for good. A decade later, they found themselves with a young son who had been bitten by the racing bug.

“It took quite a bit of talk to get them back into the sport,” said Paine. “Dennis Taney, a family friend for years, was instrumental in helping to convince them to put me in a car.”

Paine’s persuasion worked: By the time the 1979 season rolled around, the family garage was once again home to a dirt track racing machine.


“We bought an old Camaro from Jeff Kappesser,” Paine said. “We ran that car for a year at Canandaigua. Back then, the Street Stocks were broken down into Rookie, Novice and Expert divisions. I raced in the Rookie class one week and won the feature, moved up to the Novice class the next week and won, then went right into the Expert class against some veteran drivers. By the end of the season, we had won 13 races in the Street Stocks and were ready to move up to the Late Models.”

From 1980-82, Paine raced the Late Model class at Canandaigua and Weedsport. Meanwhile, he got his feet wet in Modified racing, making some starts aboard Gary Farnsworth’s #22x — starts that were pretty much forgettable.

But by 1983, Paine was ready to make the move into Modifieds. The team purchased a used Troyer car formerly driven by Johnny Podolak. That proved to be a learning year for Paine, with a couple of runner-up finishes to fellow Hall of Fame driver Merv Treichler at Canandaigua the high points.

Making the switch to a Birosh chassis in 1984, Steve quickly landed in the winner’s circle. A year later, Paine served notice that he was going to be a force to be reckoned with — not only in weekly competition but on the Super DIRT Series as well. Paine defeated all of the touring series stars to win the 1985 Fingerlakes 100 at Canandaigua, his first of 27 Super DIRT Series victories.

In 1987, Paine was in a Kneisel car. “Bob McCreadie had one of the few Kneisel cars in this area and he was going really well with it,” said Paine. “We got a big-block motor from Jeff Brownell and got going good. We had some great seasons with those Kneisel cars.”

Paine drove to the track championship at Canandaigua in 1990 and a pair of Modified titles at Cayuga County in 1991 and 1993. He also picked up one of his signature wins, the 1991 Summer Nationals at Ransomville Speedway.

“We might have won the Mr. DIRT title that year,” said Paine. “Back then, the asphalt races were part of the Super DIRT Series, and we didn’t have the equipment to compete on asphalt. We didn’t have a big small-block like a lot of the other teams did and we ran the same car we raced on the dirt. We wound up third to Doug Hoffman in the points that year.”

Still, Paine was named the 1991 DIRT Driver of the Year.

Steve also found a great deal of success racing north of the border. For three years, Paine made the weekly trip to Canada to race the Serge Desjardins #1x, bringing home the Autodrome Drummond track championship all three years, from 1995-97, and picking up a pair of titles at Autodrome Granby. Paine also became a two-time champion of the Canadian-American Challenge Series.

“We had a lot of fun and a lot of success racing in Canada,” said Paine. “The people up there are really serious about racing and really get into it. The teams worked hard and played hard. Up there, the clubs don’t close until 4am! A lot of times the guys would close the clubs at 4, but at 7am they were in the garage ready to prep the car to go racing that night.”

The prestigious Mr. DIRT trophy that got away years ago would eventually find its way into Paine’s possession at the conclusion of the 2000 season. By that time, Paine had made the switch to a Teo Pro car.

“I drove for Rick and Corky Thum in 1998 and they had a Teo chassis. That car drove like nothing I had ever driven up until that point, so we ordered one for the 1999 season.”

In 1999, Paine and team had the new Teo on a tear, winning a trio of 200-lap features at Fonda, Autodrome Granby, and Bridgeport speedways. He also earned his first touring title: Paine was the 1999 Mr. DIRT 358 Modified champion. In 2000, Paine was the dominant force on the Modified Super DIRT Series, leading the point chase most of the summer, with a big win in the Autodrome Granby 200 for the second straight year. Paine was not only strong on the series, but was strong at his home tracks as well, claiming his second Canandaigua championship and another small-block Modified title at Black Rock Speedway.

After chasing series points all over the Northeast, Paine has cut back on his traveling in recent years, concentrating his racing efforts on his home tracks. In 2015, Paine won his eighth title at Black Rock, then successfully defended that championship in 2016 at the track now known as Outlaw Speedway, where he has tasted victory 96 times in his storied career.

“I still like to race,” said Paine, who is 56. “I’m not sure how many more years I’ll drive — my kid just turned 15 and he’s talking about racing. I’m not sure exactly what we are going to do there, but it would be tough to field two cars.”

Whenever he does decide to hang up the helmet, Paine can do so knowing he has accomplished pretty much everything there is to accomplish in a dirt Modified. His résumé includes 313 wins at 26 speedways, with 27 Super DIRT Series wins and 27 DIRT 358 Series wins, and an incredible 32 track championships in his career to date, including 11 at Canandaigua and nine at Black Rock/Outlaw Speedway. With numbers like that, Paine is more than deserving of induction into the Northeast Dirt Modified Hall of Fame.

Sixteen years ago, in a Trackside Magazine article, journalist Tom Boggie made the following observations that still hold true today: “Every sport has its quiet heroes; incredible talents whose egos don’t overshadow their talent; who earn respect, not demand it; who gain the adoration of fans and the trust of fellow competitors without even trying…

“Steve Paine has nothing left to prove to anyone. He progressed from humble beginnings to the pinnacle of DIRT racing, and what’s even tougher, he’s stayed there, without the help of a car owner with deep pockets or a major sponsor. Everything that Steve Paine has accomplished has come through hard work and dedication. It’s no wonder that the quiet man is one of the most respected drivers on DIRT.”