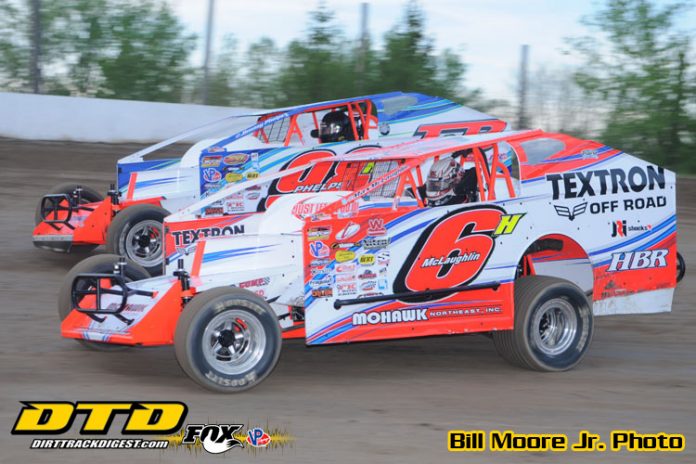 The Heinke-Baldwin Racing team is showing strong momentum at their home tracks.

The weekend kicked off Friday night at Brewerton Speedway for the HBR team.

Phelps opened the night by finishing fifth from his seventh place starting spot in his heat race.

“We were fighting track conditions again,” Phelps said. “We knew we had a pretty good car, it was just the matter of trying to make it neutral enough to get through the holes and also be good through the smooth, slippery party of the track.”


Phelps charged from his 17th starting position and drove his way through the field to finish in the runner-up spot.

“I thought we did a pretty good job at having a good balanced car,” he said. “Other than that we just tried to be as patient as possible. It ended up paying off.”

Phelps had the taste of victory at his fingertips on a restart with two laps remaining. “We had a shot there in the end,” he mentioned. “We had a legitimate shot to make something happen but I missed my marks which got the leader out in front of me too far for me to make any ground up.”

McLaughlin advanced from his seventh starting position to place third in his heat race.

McLaughlin rolled off fifteenth for the feature and quickly maneuvered his way to the front in the 35-lap main event.

The HBR team closed out the weekend Saturday night at the high-banked oval, Fulton Speedway.

“Saturday was like a 180,” Phelps noted. “The track was beautiful; probably the best I’ve seen Fulton in a long time.”

For the second time this past weekend, Phelps started 17th in the main event.

“For some reason the waters never really parted for us early,” he said. “Once we got the clear track where we could take guys on one-on-one we were able to get to the front.”

Phelps was able to run down the leader by a straightaway but felt he caught him too late in the race. “I never got to the leader until two to go,” Phelps said. “The car was good enough to win, we just didn’t catch the breaks we needed to get to the front early. We ran out of time. We’ll keep plugging away and get better.”

After a rocky start in the heat race, McLaughlin started deep in the field for Saturdaynight’s main event. “We tried some out of the box things on Saturday and they didn’t work like we had hoped,” he said. “We’re going back to the drawing board after our thirteenth place finish Saturday night.”

This weekend consists of two regular point shows for the HBR team at Brewerton on Friday, May 26 and Fulton on Saturday, May 27. The Super DIRTcar Series will be off until they make the trip to Five Mile Point Speedway on June 11.

Strange Oval is a division of Strange Engineering, an industry leading company that has been manufacturing driveline and suspension components for all forms of racing and hi-performance vehicles since 1964. For more information on Strange Oval, visit www.strangeoval.com.

“Their driveline and axel components are second to none,” Phelps said. “They offer a wide variety of tuning capabilities that definitely give their customers an advantage”

“I can’t thank Simpson enough for their awesome products that keep me safe every time I strap into a race car,” McLaughlin said.