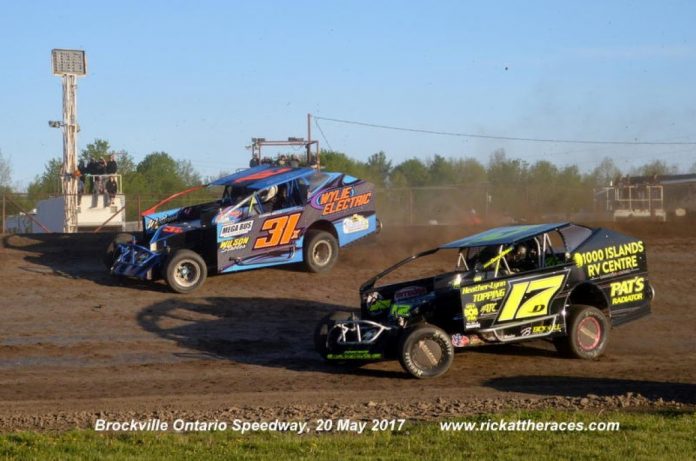 INVERARY, ONT – Danny O’Brien kicked off his 2017 358 Modified season at Brockville Ontario Speedway right where he left off in 2016 – on top. The 2016 track champion earned the track’s opening night victory on Saturday, May 20 in convincing fashion to begin his title defense. His first win of the season comes in just his third start.

The start to the night was less than ideal as O’Brien’s first lap of competition didn’t go as planned.

“We spun out the first lap going into turn one,” O’Brien said. “I got up over the cushion and went off the end. We went to the back, rebounded from that and won the heat.”

Racing from the rear of the field to victory in just eight laps was an impressive accomplishment, despite the early race slip up.

“It’s not easy,” O’Brien said. “Hopefully it’s a sign of things to come this season. We’re working hard, so we’ll see what happens.”


O’Brien’s heat win qualified him for the redraw where he grabbed the pole for the 30-lap main event. With the ‘Pocket Rocket’ starting on the role it was no contest. O’Brien led every lap and drove his 1000 Islands RV Centre/ATC World Class Trailers No.17d to victory lane for the first time in 2017

“The car was great,” O’Brien remarked. “It makes it easy when you start up front. You usually don’t know how good your car is, but we were able to run away a little bit.”

Run away he did, earning the win by a 3.5-second margin over runner-up finisher Bobby Harrington. On the track, that translated to a full straightaway advantage.

Saturday’s win was O’Brien’s third race in his new Bicknell Racing Products chassis. The car performed well and helped erase some of the unknowns about the new ride.

“When you bring a new car out you always wonder if it’s going to be as good as the last one,” O’Brien said. “You don’t really know until you get back to your home track what you’ve got. So far it seems good.”

O’Brien will not carry some momentum into a pair of 50-lap events this weekend. He’ll battle in the Memorial Cup at Mohawk International Raceway in Hogansburg, NY on Friday night, a race he won last year. The scene then shifts back to Brockville for the first round of the Ogilvie’s series for the second 50-lap showdown. Last week’s win could go a long way towards success in both events.

“It’s good to get the monkey off your back early in the year,” O’Brien said of earning his first win. “Sometimes it can drag on and when you win one early it just takes the pressure off. The guys worked hard all winter, so it’s good for them too.”

It certainly doesn’t hurt either that O’Brien is a fan of the 50-lap distance.

“It just gives you that little extra time if you’re starting near the back,” O’Brien said. “You don’t have to thrash as hard to get to the front. Its an extra bonus for the fans, but its not 100 laps. Those races can sometimes drag on. As a racer, I like the 50-60 lap races.”