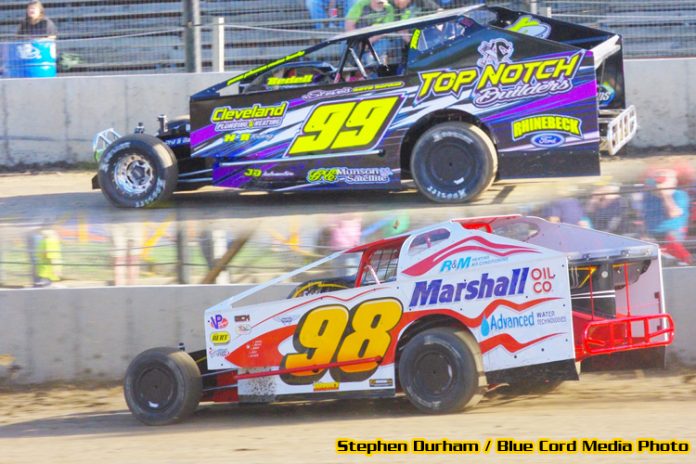 Last Saturday’s double features for the big block modifieds at Lebanon Valley Speedway did not going as planned for Eddie Marshall. In the first feature Eddie made contact with the wall in turn 4 which sent the Marshall Oil Co 98 car into the crossover entrance shooting the car back into the field of cars making their way down the long Lebanon Valley front stretch.

Eddie’s Teo Pro Car was a total loss, and while one is ordered and on the way to the 98 shop that left Eddie without a ride for this weekend.  After a mechanical issue that cut the night short for Eddie in the season opener and the wreck in week 2 another week of no points could have been a major problem for 2016’s 5th place finisher.

Eddie will be behind the wheel of a big block modified Saturday on the high banks, a very familiar sight for any fan of Lebanon Valley, but it will not be the customary white and red Marshall Oil co 98 that fans have seen for over three decades.  That is where Kolby Schroder Racing enters the story.

When Eddie straps in Saturday night he will be behind the wheel of one of Kolby Schroder Racing’s #99 Top Notch Builders Teo Pro Cars.  The two teams have been friends for many years, Kolby even purchased his first race car from Eddie when he made the move from Karting to Open Sportsman competition.


Memorial Day Weekend  is a tough weekend for the 99 team , due to work commitments Kolby misses the heat race so having Eddie and the 98 team  pitting with their team is a benefit that the 99 team looks forward to.

Eddie, universally regarded as one of the most  respected drivers in the pits, had nothing but gratitude for the helping hand from his friends, and excitement for the weekend.

“I am super excited for this opportunity, and thank Kolby Schroder racing for the opportunity.  I am looking forward to driving this weekend, and I hope to do well.”

Eddie Marshall and Kolby Schroder will be in action next this Saturday May 27 at Lebanon Valley Speedway for County Waste & Wohrles Food Present Military Night!!  Gates open at 5pm , Racing begins at 6pm.