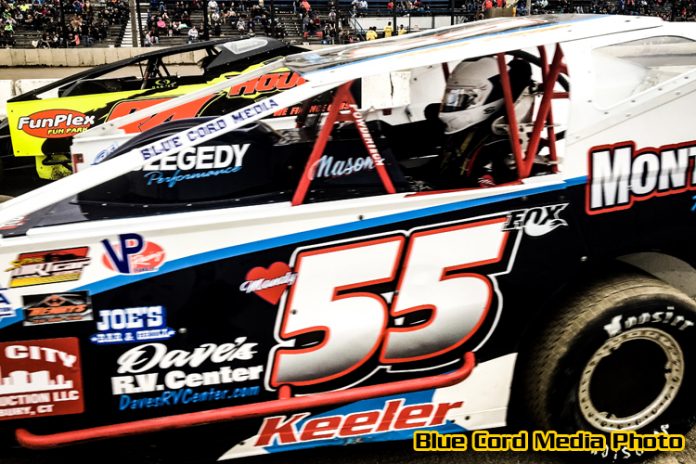 DANBURY, CT –  Mike Keeler and the Montanari Fuel #55 team knew that this past Saturday’s double features was going to take a toll on their equipment but hoped to avoid any major issues.  The night started out well for Mike, climbing into the top ten in the first feature, but often when you least expect it mechanical gremlins rear their ugly heads. While running in 9th the #55 was sidelined with a motor issue , shutting the team down for both features.

Mike always looks for positives, and while the racing and its toll on the team’s car was a night that Mike would rather forget, the help he received this week from his family owned and operated team was as dedicated, diligent, and selfless as always.

Mike’s Father in Law Paul Szegedy has been busy all week repairing their primary motor so they don’t have to bring out the back up motor earlier than they had hoped. Mike’s Uncle Wayne headed to upstate NY to get the steering box fixed, while Jim Anderson cleaned all the lines, filters and oil tank. Mike Keeler Motorsports may not be the most funded team in the pits, but as always they are wealthy with dedication from a true family racing team.

“I feel terrible because we had a lot of friends and family in the stands this past weekend and our night was cut short.  I really felt like we had a great run going early on Saturday. I would like to thank Kyle Sheldon and the 42 team for helping us out with parts, and a big thank you to my wife Mandy for running all over the place to get the parts we needed. “


Mike Keeler and the #55 team will be back in action this Saturday May 27 at Lebanon Valley Speedway for County Waste & Wohrles Food Present Military Night!!.  Gates open at 5pm, Racing begins at 6pm.