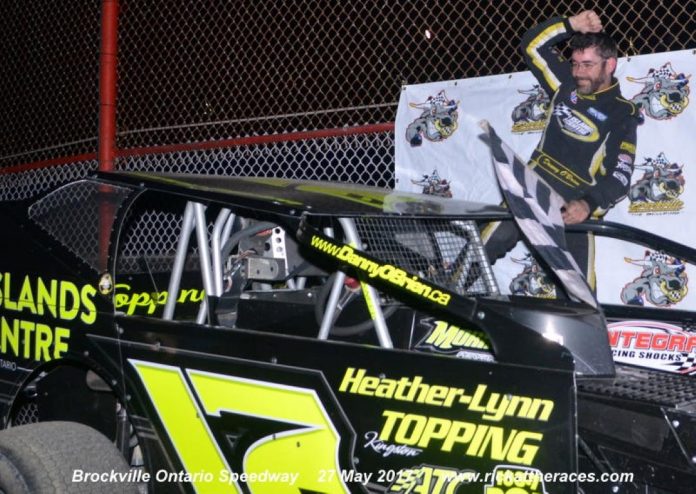 INVERARY, ONT – Danny O’Brien turned in a perfect score card on Saturday night at Brockville Speedway. The driver of the 1000 Islands RV Centre/ATC World Class Trailers No.17d 358 Modified was fastest overall in time trials, won his heat and then scored the Feature win in the Ogilvie’s mini-series opener. It was also his second straight win at Brockville to start the season.

“We got off to a good start,” O’Brien said. “We started third in the Feature and the outside was the place to be. (Ryan) Arbuthnot got the early race lead and I chased him for 20 laps until we had a yellow.”

The first yellow flag led to a flurry of mid-race restarts that proved to be a challenge for O’Brien. He ultimately made the most of his chance to take the lead from Arbuthnot and from there, he raced the outside groove and drove to victory lane in the 50-lap affair.

“On the first restart I tried to clear him on the bottom and didn’t get it done,” O’Brien said, describing the scenario. “We only went a lap or two and the yellow came back out. The second time I went into one and two on the bottom and cleared him. Halfway down the backstretch I was half a car ahead and the yellow came out. That gave me the lead and we went to the outside and that was it.”

The victory was the second in a row for O’Brien, who has only raced twice in the last two weeks due to rainouts and wet grounds at tracks throughout the area. The pair of early season wins echo his 2016 championship season and help him build momentum for his team as the season gets busier.

“It gives you confidence,” O’Brien said. “When you get off to a bad start – I’ve done that before – and you have a wreck or two or you break something and next thing you know you’re a month into race season with no good finishes. You just get down on yourself and starting questioning everything. So when you get off to a good start, it really helps keep your mind in the right spot.”

As much as O’Brien believes there is much to be gained from a pair of early season wins, he does not feel there is any added pressure to continue the hot streak.

O’Brien believes the first real test for his new Bicknell Racing Products chassis will come in this Saturday’s race at Brockville when he is forced to start near the rear of the field for the first time this season due to the track’s handicapping policy.

“We’ve had two heads-up start races where we’ve started up front, so I guess this week coming we’ll find out how we stack up in traffic,” O’Brien said. “This week we’ll be coming from deep in the field and we’ll see how good we are.”

O’Brien will be in action twice for the upcoming weekend, weather permitting. He will race at Brockville on Saturday, June 3 in weekly competition. The team is still deciding between competition on Friday, June 2 at Mohawk International Raceway or Sunday, June 4 at Weedsport Speedway for the Big-Block/Small-Block Challenge. Stay tuned to www.DannyOBrien.ca and to the team’s Facebook page for the most up to date information.