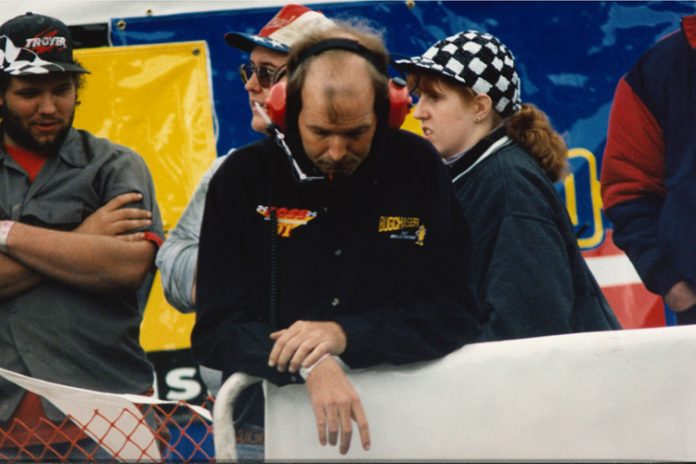 If you have never met Randy Ross you’ve missed out.  He’s one of the most unique individuals I’ve crossed paths with —he’s extremely witty, comical, generous, sarcastic to the nines, a friend to many, and back in the day some may have described Randy as trouble (just ask him about Howard’s cigarette machine). And every time you see Ross he is always surrounded by people, a popularity that has carried over for decades.  He came into this sport as a teenager and he left the sport as one of the most successful car-owners in the Northeast.

In the early 70’s Ross’ mom, Alice, took the eleven year-old Ross to Albany Saratoga Speedway.  That was back when drivers like Richard Petty, Dave Marcus and Bobby Allison would frequent the Malta-based oval. Lebanon Valley Speedway each week.  Then it was Eddie Webb and then he ended up crewing for Valley Modified champion Kenny Coon.  It was while turning wrenches on Coon’s car that Randy met Bryan Goewey.

“Back then me and Bryan were the guys that held onto the other end of the leaf spring while the other guy hit it with a hammer —it rang through your whole body,” laughed Ross.  “Or we had to sand and repaint old headers, we got all of the crap work.”

Then they met Rick Beckmann who was crewing on Mert “Socks” Hulbert’s car.  Beckmann would remain at Ross’ side for the next few decades.  Coon’s was involved in a horrific accident on the front stretch at the Valley and decided to call it quits so the trio ended up at Bob Hellwig’s shop in East Greenbush (NY) which housed Dave Leckonby’s ride.

“Me, Rick and Bryan were race people —if you had a dollar in your pocket you went to a race,” said Ross of the early days.  “We weren’t doing it to please anybody, or for anybody’s ego.  We were just having fun —at times it got crazy, at times we were crazy but we were doing what we wanted to do and we were having fun. I wouldn’t trade any of it.”

It was a verbal assault that happened at the New York State Fairgrounds in Syracuse during the Super DIRT festivities.  It would send things in a totally different direction.

Leckonby was shoeing for car-owner Larry List for the event and they were suffering motor issues throughout the entire week.  It was frustrating.

“Bill Lobdell (Leckonby’s Syracuse sponsor) was watching us (Ross, Beckmann and Goewey) and he said ‘you guys will never win a race’, recalled Ross.  “Me and Bryan looked at each other and said ‘I’ve got half, you’ve got half’  we were going to prove that we could win a race.”

You guessed it. Ross was now a car-owner.

So in 1987 Ross became a co-owner with Goewey, who would also drive their creation.  Goewey spending only two years behind the wheel, retiring due to business commitments.  And during that time the duo proudly won the Non-Qualifiers event at Super DIRT Week in 1988, were awarded with Rookie of the Race plus placed fifth in Sunday’s prestigious event.

“When you grow up going to Syracuse you always wanted to be in that roped-off area afterwards,” explained Ross of the desire sought after by many.  “We were so happy and at that time I thought that was the best we would ever do up there.”

“I was walking back to my trailer, obviously very excited about our top-five finish and Doug Olsen (chassis builder and owner of Bud Olsen Speed Supplies) walked by and said ‘get that smile off your face will you’ —I never personally met him (though Ross had purchased an Olsen chassis from modified driver Eddie Marshall) but we ended up being best friends” said Ross whose drivers only rode Olsen chassis’ until they closed-up shop in 2000. “That relationship with Doug was probably the reason I achieved what I did in racing, the contacts, the people I’ve met through him.  It made a huge difference for our team.” Ross’ story has many chapters — driver’s Matt Quinn, Bobby Wilkins, and Kenny Brightbill filled the seat at one point.  Ross was co-owner of a speed shop (B.O.S.S. North) and he had both of his hips replaced.

Then along came Billy Decker, a friendship that started when both were running at the Valley.  Ross with Quinn and Decker was running for his dad.  Decker confronted Ross during an end of the year event at Orange County Fair Speedway about a formation of teams.  It was a sensational team-up.  Decker brought the Wheels Discount Auto Supply Stores sponsorship with him, along with crew-chief Scott Jeffery.

And success seemed to come easy.

“I think it was a combination of putting the teams together,” said Ross.  “Billy, Scott, Rick, Mike (Kronau) it was all of this put together, our first year together we won 7 races at the Valley, nobody was winning 7 races back then.  And once we went out on the road Billy always had great ideas about motor combinations that worked really well once we started running out West.”

Over the years the pack went up and down the New York State Thruway regularly with Ross’ bright yellow ‘toter home’ becoming a familiar site on the interstate.

The duo was also heavy supporters of the short-lived USNA Organization.

“We tried to help them out but everything we tried to do always seemed to fail,” recalled Ross who also gained a respect for DIRT founder Glenn Donnelly.  “No matter how much me and Glenn butted heads he always took care of the people who took care of him.  I never saw eye-to-eye with him but I realize what he did for the sport — I have a respect for what he set-up but the thing that always bothered me was the ‘politics’ in this sport.  When decisions are made it shouldn’t matter who you are and I was very verbal about how I felt.” After Decker left Ross Motorsports in 2003 it was up-and coming superstar Matt Sheppard who filled the seat until Ross retired at the end of the 2008 season.

“Unfortunately when Matt came to us my stock was dwindling at that point,” explained Ross.  “The economy was crappy and I wasn’t getting as much sponsorship from the stone company (Ross’ family owns Adam Ross Cut Stone, his long-time sponsor and employer) and it became harder and harder to keep it going.”

The decision to pull the plug was one the Ross’ worst moments.  He knew it was over when his sold his ‘toter home’ (the toy he always wanted).

Ross made some great friendships over the years and he continues to swap stories weekly with Olsen and close friend Tim Fuller.  Since Fuller is running at Fonda Speedway this season Ross already beelined to Fuller’s hauler to put his trademark ‘director’s chair’ in Fuller’s truck for his Saturday night visits.

Ross was dismissed from the family business in 2012, he lost his girl (Steph Fulgo) of 29 years to cancer in 2013 so he’s been adjusting. And his longtime illness (ankylosingspondilities, which was triggered by a automobile accident years ago) makes it more difficult to get around so he’s mastered his grilling skills and will make you a BBQ dinner to die for.

He’s lights up when talking racing.  We laughed for hours sitting out on the deck of Ross’ Menands (NY) home as he recalled so many race stories.  So how does he feel about receiving the ‘2017 Gene DeWitt Car-Owner Award’?

“It really means a lot, I’m surprised and never expected something like this,” said Ross.  “I never knew Gene DeWitt but I know what he did with racing in asphalt and on dirt and it’s truly an honor.  Do I deserve it? No, I was surrounded by a lot of great people and we did this together.  We had a lot of fun —it was a good run.”