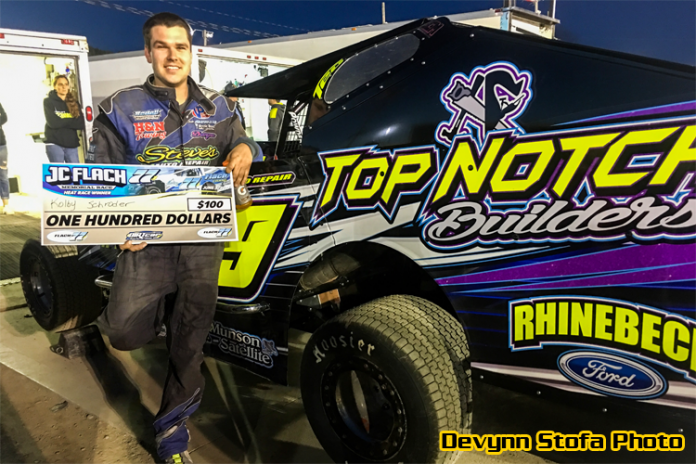 Kolby Schroder was looking for a good night this past Saturday at Lebanon Valley, and the driver of the #99 Top Notch Builders big block modified got just that. Schroder came home with a 3rd place finish in the JC Flach Memorial Race after winning his heat. Kolby was 4th fastest in the first round of hot laps, and the fastest car of all the heats.

The 99 team worked hard all week, putting in extra hours between cleaning both cars and trying to figure out where they were after a strong start was stymied by a mechanical issue that slowed the team’s momentum the previous week.

“We made three slight changes to our set up and they did make a difference.” Schroder said. “After rolling off the trailer 4th fastest we knew we had hit on something. The track started to really slick off by hot laps, so we made some more changes to keep up with the track.”

As the 30 lap feature progressed the car started to become very tight in the first turn, Kolby would fall back to 8th place from his 6th place starting position. Sitting in 8th place Kolby would start his charge to the front. Kolby barely missed a wreck between the 42P and the 1 car of Solits in turn 1, but he kept charging. By lap 24 he was in third place and gaining on the front two cars. Eventually Kolby would run out of laps and the checkers would wave on Rob Pitcher’s 17 car seeing Kolby cross the line in third about two car lengths behind the top 2 cars.

“Congratulations to the 17 team for a great win, and on such a special night for the Flach family and Lebanon Valley Speedway.” Kolby said. “Our team is just really motivated to get a win this year, and we if can keep the car running like this we should be able to pick one up before seasons end.”