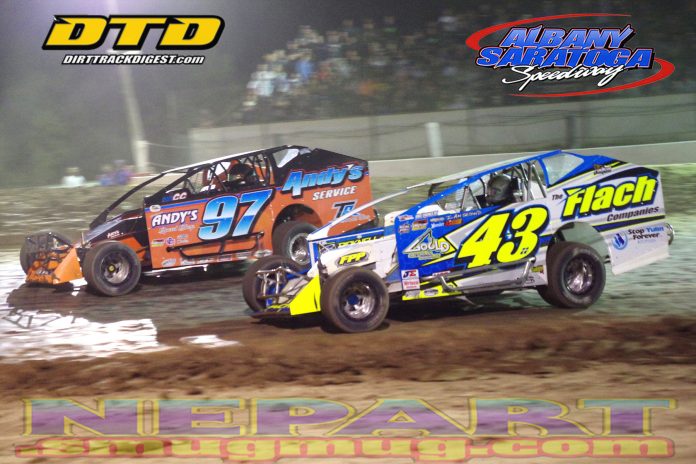 The ‘Batman’ Peter Britten started his weekend off strong on Friday night by picking up his third top-five finish at Albany-Saratoga Speedway in Malta, N.Y.

“We were decent early on, it was just one of those races where it didn’t work out for you,” Britten said.

Britten started seventh in his heat race and finished where he started – in seventh.

Britten missed the handicapping in his heat race, which placed him on the outside of the tenth row for the main event.

“We made some slight progress at the start but towards the end of the feature we came on really strong,” he said.

Despite a rough start to the night, Britten was happy with his performance.

“It was one of those races you didn’t want to end,” he said. “The longer we went, the more people we were passing. From where we started we’ll take that result. Hopefully we can build some consistency up there. We’re still up there in the points so hopefully we can give a good challenge for the track championship.”

Britten capped off the night with a fifth-place finish.

Britten timed second fastest in his group time trials, placing him second in his heat race.

Britten made some changes for the feature but afterwards felt unsure of his choices.

“I either didn’t make enough changes or made too many, I’m not sure,” he said. “We weren’t really any good.”

Britten started on the inside of the fourth row for the 67-lap main event.

“When you’re out there and you don’t quite have enough for the other guys, you slowly start to fall back.”

Britten went out with a soft tire, which seemed to be an issue for most drivers.

“I was running around fifteenth when I came in to change the tire,” he said. “At that point it was kind of a lost cause. Everyone was wrecking and popping tires. I still tried but I was just hoping we’d survive without getting in a crash or having any issues.”

Britten rallied a 15th-place finish in the 67-lap main event.

“They’re great stuff; easy to work with and maintenance free.”