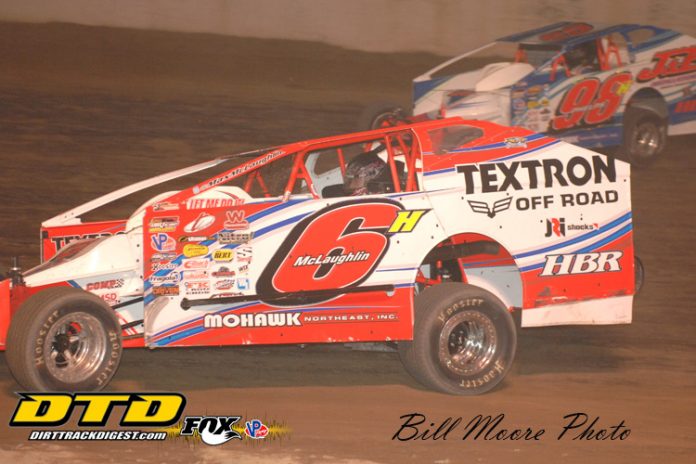 Friday night at Brewerton Speedway was the start to the three-day race weekend for the team.

“It was one of them nights,” Jimmy Phelps noted. “We probably had a better car than where we finished.”

Phelps qualified fifth from his sixth-place starting spot in his heat race; placing him 16th for the main event.

“It was really how you hit the holes,” he said. “The track is still really challenging with the ruts.”

Phelps was coming through the field Friday night until his left rear wheel loaded up with mud. “The rear end was bouncing for the rest of the race,” he said. “We kind of got what we could get. At the end of the day it made it real difficult to navigate. We were pretty wounded.”

McLaughlin placed sixth in his heat race from his seventh-place starting spot, placing him on the outside of the eighth row for the main event.

“The track was really rough,” he said. “We couldn’t drive through the holes.”

McLaughlin maneuvered his way through and crossed the line in 12th.

Night number two saw the team at Fulton Speedway on Saturday for a regular points night.

Phelps drove his no.98h machine to third from his seventh-place starting spot.

Phelps started on the outside of the eighth row for the feature.

“I didn’t take off as good as we needed to,” Phelps said. “It left us playing catch up.”

Phelps was able to work his way through the field from deep in the pack and garner a fourth-place finish.

“We were able to get to fourth but really just weren’t good enough at the end to keep our charge going,” he said. “All in all I think we’re close. We just need to keep searching.”

McLaughlin started sixth in his heat race and worked his way up to third, lining him up in 13th for the main event.

“We drove up to fifth and got caught up in the loose stuff at the top with a couple of laps to go,” he said. “If it wasn’t for that, we could have been better.”

McLaughlin capped off the night with a 7th-place result, which marked his third top-10 of the season at Fulton.

The team closed out the weekend at Five Mile Point Speedway in Kirkwood, N.Y. on Sunday for the third Super DIRTcar Series race of the season.

“I thought we had a really good car in hot laps,” Phelps said. “The track changed just enough that we kind of missed it a little in time trials. We made some adjustments but really didn’t make enough adjustments to find our way out of the hole in the heat.”

Phelps finished where he started in his heat race – in fourth.

Teammate, McLaughlin, was off to a strong start at the beginning of the night so the 98h team took some setup notes and applied them to their car for the feature.

Phelps rolled off in 16th for the 67-lap main event.

“The car fired really well in the feature and we were able to move around and stay out of trouble enough to sweep by anything,” he said. “We were able to get up in the mix where we really didn’t have to abuse our stuff too early. It allowed us to have enough to make it in the end.”

Phelps was able to charge forward and capture his second Super DIRTcar Series podium finish of the year.

Phelps felt his third-place finish was a great rebound after the last Series race at Bridgeport Speedway where he finished 20th back in May.

“Hopefully this will build us some momentum on the tour again,” Phelps said.

McLaughlin was very pleased with his performance on Sunday at Five Mile Point.

“We set fast time in time trials and won the heat,” he said. “I just need to work on my redrawing skills.”

McLaughlin drew position no.12 for the 67-lap main event.

“We had a really good car,” he said. “By the time we got to the top-five we already used up our stuff to get there. We just needed to start farther up front to get the win.”

McLaughlin was caught in a scuffle early on in the feature when Ryan Watt hit a hole, shooting him across the track, making hard contact with McLaughlin.

“It destroyed the right side of the car,” he said. “Surprisingly it didn’t really affect the car that much. Despite that incident, I was really good.”

McLaughlin capped off Sunday night with his best finish on the Series thus far, in fourth-place.

Next on slate for the HBR team will be Brewerton this Friday, Fulton on Saturday, Weedsport on Sunday for the Big Block vs. Small Block makeup show and Outlaw Speedway on Tuesday for the next Super DIRTcar Series race.

For information on Fragola, visit www.fragolaperformancesystems.com.
“We’ve had a really good relationship with Fragola for 10+ years,” noted Phelps. “They’re quality is unmatched and they provide us with great stuff.”

“Eibach Springs are a great product. They’re strong and get the job done”