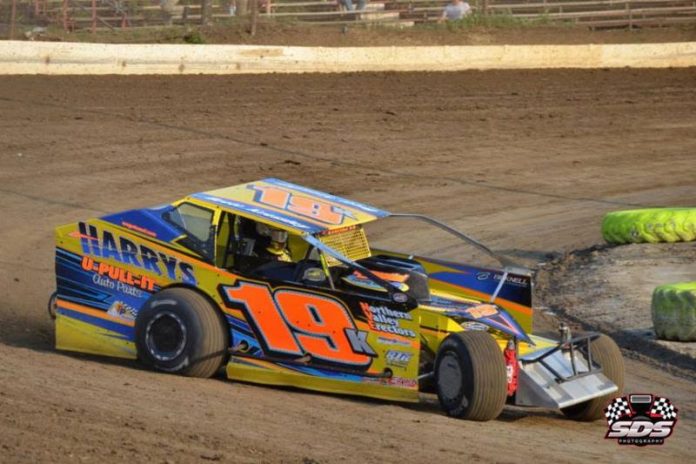 Brett Kressley recorded his best finish of the season Friday night at Big Diamond Speedway with a second-place finish in his No.19k Small Block Modified.

Kressley was very pleased with the cars performance after advancing to second in his heat race from his eighth-place starting spot.

After a pre-race redraw, Kressley drew the inside of the fifth row for the main event.

“At some point I was up to sixth and unfortunately blistered a tire and kind of rode it out for the rest of the race,” he said. “I was happy with seventh place.”

Friday evening saw Kressley start on the pole of a make-up feature that hit the track first thing. Kressley ran into carburetor troubles forcing him to pull off.

After the make-up feature, Kressley was able to fix the carburetor issues and make it out for the heat race.

Kressley fell back a spot in his heat race and crossed the line in second.

“The car was much better,” he mentioned. “We lost the lead with a one to go restart.”

Kressley started on the pole for the main event and lead every lap but the last one.

“I held Ryan Godown off for three or four restarts,” he said. “We got caught up in lapped traffic coming to the checkered and lost the lead on the last corner to Godown.”

With the problems Kressley has been having this year, losing the lead on the last lap may not be easy to swallow for most but for Kressley, he was fine with the results. His second-place finish Friday night is his best finish so far this season.

Kressley closed out the weekend Saturday night at Grandview Speedway.

Since Kressley doesn’t run at Grandview weekly, he doesn’t have handicapping points which results to starting at the back of the heat race and in the feature.

Kressley started tenth in his heat race and slowly worked his way up to the front of the field, winning his heat by four seconds.

Kressley started on the inside of the seventh row for the feature.

“It was an intense battle between (Duane) Howard, (Craig) Von Dohren, (Jeff) Strunk and I,” he said. “We were all under a blanket for the first fifteen laps. At one point we got together and I broke the left front shock tower off.”

Despite the broken shock tower, Kressley was still able to handle the car and pass drivers. Under the following caution the race director told Kressley his car was unsafe to drive and had to go pit-side, resulting in a DNF.

“If it weren’t for Kressley’s Auto & Truck Sales and my family I wouldn’t be able to what I love on the weekends and some midweek shows,” Kressley said. “They specialize in pickups and some SUV’s.”