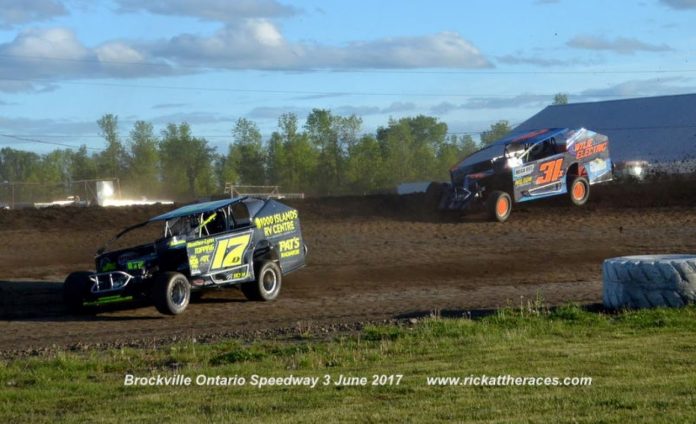 INVERARY, ONT – Danny O’Brien continued his torrid pace to start the season at Brockville Ontario Speedway with a second-place finish following a thrilling side-by-side battle with his brother Tim in the 30-lap Feature on Saturday night.

O’Brien claimed a second-place finish in his heat after starting sixth for the eight-lap heat.

“We got the bottom working in the heat race and everybody else was on the top, so we were able to get up to second,” O’Brien said.

After scoring a second-place finish in last week’s main event, O’Brien started at the rear of the handicapped inversion in ninth. He was patient in the opening laps while the field sorted itself out, but made a daring three-wide pass at the hallway point to take over the fourth position.

“You can actually see the lap counter at this place coming out of turn two, which is handy to keep track of what lap it is. We just kept picking away while trying to keep the tires underneath it, which is a big thing here,” O’Brien said of his race strategy. “You can run a tire off the car pretty quickly, especially when the Sprint Cars are here.”

O’Brien moved into third a couple of laps later – and just in time. Second-place runner Chris Herbison’s No.63 broke while in second, allowing Danny to pull alongside him brother Tim for the lap 21 restart. Tim’s half straightaway lead was erased as the two brothers were pitted against each other for the final nine laps.

They raced side-by-side for most of it with Tim on the outside and Danny on the bottom. Danny appeared to have the advantage with five laps to go, but Tim had the preferred outside lane and gathered enough momentum to power to the win off the final corner.

“I knew it was going to be a good race,” Danny said. “I got the tires cooled down and the bottom was good for a few laps, but the longer you ran the worse it got. I couldn’t get it done the first few laps, so we just kept trying and the fans got to see a great side-by-side race.”

Danny wanted to move to the outside lane during the battle, but was never clear of Tim and have to do his best to make the inside groove work.

“You can’t pass him on the top when he’s on the top,” Danny said. “All you’re doing is following. Into three you had to wait so long and that’s where I was losing it all. Coming out of four was really good, I just couldn’t get into turn three.”

While Danny would have certainly preferred to win his third race of the season at Brockville, he’ll gladly take the second-place result with his brother picking up the win.

“O’Briens first and second, so we’ll take it. Timmy has bragging rights this week,” laughed Danny.

Danny O’Brien will return to action in his 1000 Islands RV Centre No.17d on Friday, June 16 at Mohawk International Raceway before returning to Brockville on Saturday, June 17.