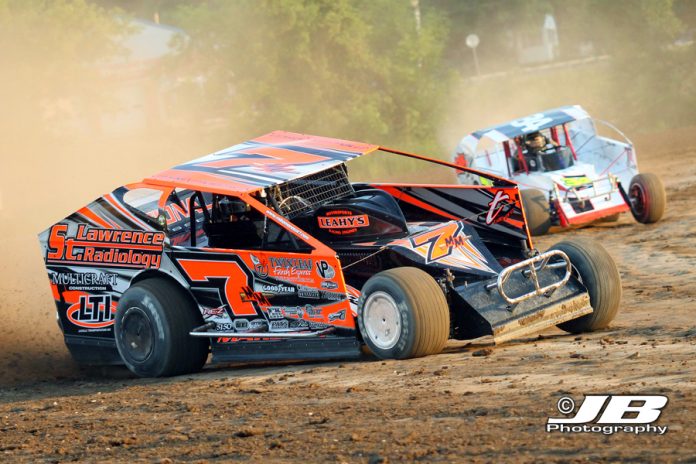 HANNAWA FALLS, NY – Mike Maresca rallied from an early-race incident to earn a sixth-place finish with the Super DIRTcar Series on Sunday night at Five Mile Point Speedway in Kirkwood, NY. It was Maresca’s first top-10 of the season with the series and followed a top-five finish in Big-Block Modified action at Fonda Speedway on Saturday night.

“We got in a little tangle early on, but had a good car all night,” Maresca said. “We worked hard on it. We came in and changed a tire, so I was in the very back. We kind of plugged through the field. It was kind of hairy a few times, but we ended up getting up front.

Maresca qualified fifth quick in his heat and finished in the same spot to transfer directly to the 67-lap Feature before racing to a sixth-place finish after being involved in the first caution of the race.

“I ended up sixth, so it was a good run here,” Maresca said happily. “We can go home and try to make it a little better. This track was a lot of fun. It was different than what we normally race at, so I’m definitely excited and it gives us some good confidence going forward.”

After a difficult start to the year in both Big-Block and 358 Modified competition, Maresca and his Rez X Racing team are starting to see the fruits of their labor. The fifth- and sixth-place finishes mark their best weekend of the season to date.

“It’s a big deal for us,” Maresca stated. “We’ve had a really rough year and we’ve been working really hard each weekend. It takes a little pressure off. We can keep focusing on getting better because we know we can do it.”

Maresca plans to continue building on his success with a busy schedule over the next couple of weeks. The No.7 team is currently scheduled to run six races in the next eight days. Maresca will compete tonight, June 13 at Devil’s Bowl Speedway in Vermont with a 358 Modified before a Big-Block Modified at Albany-Saratoga Speedway on Wednesday night.

He’ll return home to Mohawk raceway for weekly action on Friday and Fonda Speedway on Saturday. Sunday, the team tentatively plans to race the rescheduled Big-Block/Small-Block challenge at Weedsport Speedway before the Super DIRTcar Series next event at Outlaw Speedway on Tuesday, June 20.

“It’s a lot of racing, but I think we have a really good crew where everyone works hard, so we’ll be ready for all those races,” Maresca said. “We should be coming into the next series race with a lot of seat time and hopefully we can time trial a little better and run even better.”

“With all of the racing we have coming up, we should be able to learn quite a few things,” Maresca continued. “We’re going to be racing with some good guys and going to some tracks we’re going to run into with the series, so that’s important for us to get some good notes at places we haven’t been to.

Maresca’s focus for the next week, but also for the entire season, is making sure he is prepared each time he unloads his St. Lawrence Radiology No.7.

“We’re working hard and getting organized,” Maresca said. “This is our first year doing this much racing. We’re figuring it out. It seems like it’s starting to come around. We just have to keep on making sure we’re ready and everything’s set to go.

Part of Maresca’s ability to shake off the disappointing start and rebound with several strong finishes has been through the support of veteran Big-Block Modified racer Tim Fuller, he said.

“Tim Fuller’s helped me out a ton and his crew man Bruce has been a tremendous help to me,” Maresca added. “The two of them are a wealth of knowledge. My whole team works super hard as well. It blows my mind how much they help out and a lot of it is pretty thankless work. I can’t thank all those guys enough.”

Keep up to date with Mike Maresca’s busy 2017 season on his brank new website at www.mikemaresca7.com.