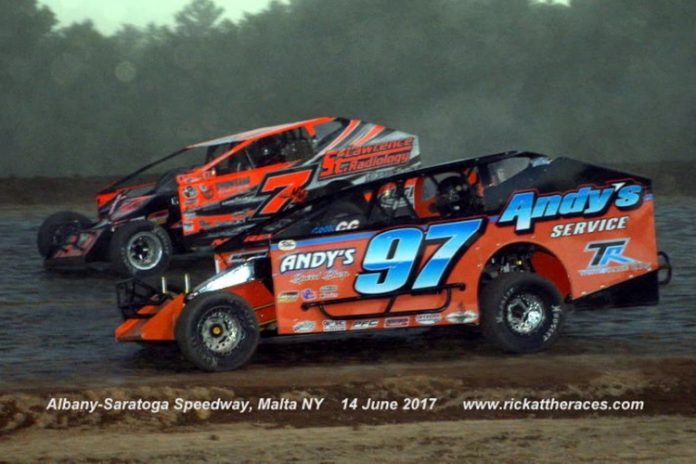 Peter Britten was pleased with his performance Friday at Albany-Saratoga where he ran into wet tear off conditions to finish sixth.

Britten started sixth in his heat race and qualified fourth, placing him on the outside of the seventh row for the main event.

“It was a weird feature,” he said. “It started lightly sprinkling towards the end of the race. It wasn’t enough to cancel the event. It was one of those awkward races.”

Britten fired off from his 14th starting position well and was able to avoid several wrecks throughout the feature.

“I made some progress,” noted Britten. “I got to fifth around lap ten. I was thinking we had a good shot of winning the thing but I think the tires sealed off. We were just trying to hold our own at the end of the race.”

Britten ran into issues during the feature when water got behind his tear offs. “It made it for an interesting time,” he said. “I ran out of tear offs with two laps to go so that made it real difficult.”

Despite running into some tear off complications during the feature, Britten was able to overcome a few issues and capped off the night with a sixth-place finish.

Britten made his first visit to Outlaw Speedway Tuesday night with the Super DIRTcar Series.

Britten timed fifth overall in his time trial group. Britten started fifth in his heat race and finished where he started – in fifth.

“There was a pretty big rough spot in turn four where a lot of people were having issues with,” he said. “After seeing Mike Maresca flip early on in the night I was pretty cautious considering I only have one car at the moment so we just held our own in the heat race.”

Britten rolled out in 15th for the 100-lap main event.

“I got caught up with a couple of other peoples incidents in the feature,” mentioned Britten. “You end up going to the back of the pack a couple of times. I kept going by a few guys there at the end but we really didn’t have a great car. It was one of those nights where you were thankful you could roll it back in the trailer.”

Britten capped off the night with a 15th-place finish with the Super DIRTcar Series.

Britten is looking forward to this upcoming month to get things rolling. “I’m excited to get back to the tracks I’m more comfortable at. I know them a little bit better so hopefully I’ll have some good runs.”

“They’re the Australian distributors of Troyer Racecars,” Britten said. “They have whatever you need. Before we got involved with that back home, there really wasn’t a speed shop that carried the parts we needed. They’re the first one to become the one stop motorsports shop.”