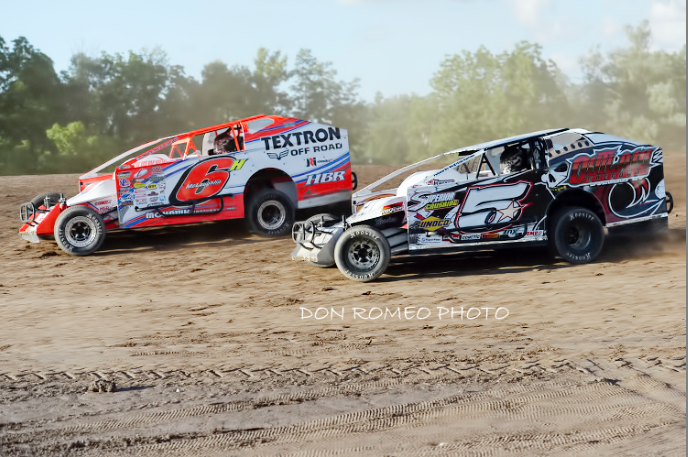 Phelps started the evening seventh in his heat race and advanced to fifth.

That lined Phelps up on the inside of the ninth row for the main event.

“We weren’t really catching any breaks,” Phelps said. “The feature went green to checkered. We were okay but not good enough to pass a lot of cars. We were a little off our game and ended up eleventh.”

McLaughlin started sixth in his heat and qualified fifth, lining him up 15th for the main event.

“There wasn’t much passing,” McLaughlin said “We had a good enough car where we were able to pass cars when they made a mistake in front of us.”

McLaughlin maneuvered to a seventh-place result, his third top-ten finish of the season at Brewerton.

Phelps started seventh in his heat race and finished sixth.

“We made some changes with the car and started eighth and got to fourth in the feature,” Phelps said. “I thought we were good enough to get up there and have something for the leaders but we faded the last ten laps. I had to hold on for fourth.”

Phelps collected his sixth top-five finish of the season at Fulton Speedway.

“We were searching,” he said. “I think this weekend we searched ourselves a little out of play so we have to go back to the drawing board. We’re in the hunt.”

McLaughlin qualified fourth from his sixth-place starting spot in his heat race, placing him on the outside of the eighth row for the main event.

McLaughlin got caught up in a wreck on the first lap forcing him to restart at the tail end of the field.

“We had some heavy damage after that but we were able to come back through the field and end up eleventh,” McLaughlin said. “Our Teo has unloaded fast at every racetrack. I couldn’t ask for better people to be helping us.”

The team then traveled to Outlaw Speedway in Dundee, N.Y. on Tuesday for the fourth Super DIRTcar Series race of the season.

“We kind of dug ourselves a hole right off the bat,” Phelps said. “We got stuck behind a car that was having trouble getting up to speed in time trials so we had to race him for a lap and a half which didn’t allow us to get up to our full potential.”

Phelps started sixth in his heat race and was able to maneuver through to finish fourth, putting him in the redraw for the main event.

After a pre-race redraw, Phelps rolled out in eighth for the 100-lap feature.

“The track fooled us a little bit,” mentioned Phelps. “It stayed tacky longer than I expected so we really over tightened. We struggled being tight. We lost spots early and fell back to twelfth. We got ourselves back up to the top five but ran out of steam there in the end.”

In the end, Phelps and the 98h team were happy with their sixth-place finish.

McLaughlin started the evening on a high note by timing fastest overall for his second Super DIRTcar Series race in a row.

“We started on the pole in the heat race,” McLaughlin said. “I hit a hole, which shot me out of the track. I came back onto the track and was able to drive back to fourth which put me in the redraw.”

“Friesen took the lead,” mentioned McLaughlin. “He was pretty good on top. We took ahold of second then hit a big hole in three and four which broke a shock on lap 20 while running second. We had to drive through the holes with no right front shock. It made for a long night on a rough racetrack.

Despite breaking the right front shock, McLaughlin was able to drive his 6h machine across the line in seventh.

The HBR team will be back in action Friday at Brewerton then to Albany-Saratoga Speedway on Tuesday for the Super DIRTcar Series Big Show.

“I have to thank Winters for their continued support with HBR,” Phelps said. “We really rely on the quality and durability of their rear end components. This spring has certainly been challenging on drive strain so we’re fortunate to have such great partners.”

“I can’t thank them enough for their continued support and their great apparel,” McLaughlin said.