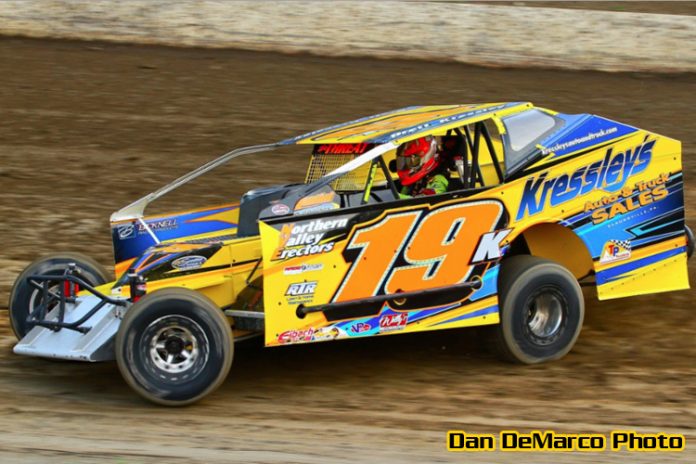 Mandee Pauch Relations – June 19, 2017 – Orefield, Pennsylvania’s, Brett Kressley ran into several issues early in the year but never gave up and picked up his first victory of the season Saturday evening at Grandview Speedway in the Kressley’s Auto & Truck Sales No.19k modified.

“I have to give a shout out to my crew for sticking together through the rough times at the beginning of the year,” Kressley said.

Kressley’s week kicked off Tuesday for a Thunder on The Hill race at Grandview Speedway.

With luck of the draw, Kressley started second in his heat race. He jumped out to an early lead and won the heat.

“We struggled a little bit with some calls on the setup,” he said. “The feature went caution free. The feature was about seven minutes and 30 seconds long; it was a record.”

Kressley felt they made a couple of wrong calls prior to the feature due to the appearance of the USAC sprint cars.

Although Kressley and the team missed the setup, they were able to hang on and cross the line in twelfth.

Kressley and the team traveled three and a half hours south to Delaware International Speedway for the Diamond State 50 on Thursday.

“We drew good once again for the heat race so I started on the pole and lead the entire heat,” he said. “The car felt great and the track was really good, fast and heavy.”

Kressley drew the outside of row two for the 50-lap main event.

“There were a lot of good cars that started up front,” noted Kressley. “We struggled in the beginning and fell back outside of the top ten.”

A few cautions were brought out during the feature allowing Kressley to regroup.

“The outside finally started to come in,” he said. “I slowly picked up spot by spot at the end and got back up to fourth. I have to give a shout out to the track crew. It was really good compared to last year.”
Kressley closed out his week on Saturday at Grandview Speedway for a regular points race.

“Luckily I got back in the handicapping so it made it a little easier,” mentioned Kressley.

Kressley started on the pole of his heat race and lead the whole way to take home the victory.

“The heat was actually eventful,” he said. “I was cruising out front then all of a sudden there was a tire rolling down the track. Everyone on the radio was screaming telling me to miss it. It was a really close call.”

Kressley’s heat race win placed him in fourth for the main event.

“It took about three laps and two restart until I took the lead around lap four,” he said. “I stretched out to a decent lead throughout the whole feature. I navigated my way slowly through lapped traffic.”

Next on slate for Kressley will be Big Diamond Speedway this Friday. Saturday night is yet to be determined.

“Customer service and power are the two most important things and they have both of them,” Kressley said.