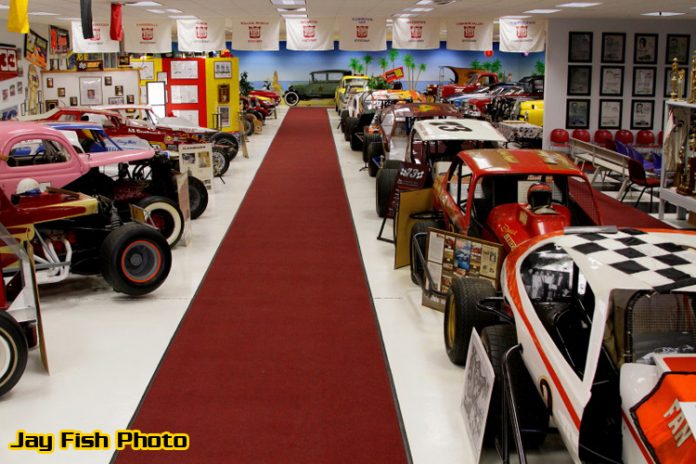 Well-known car owner and promoter Vicki Emig of Pulaski, PA, will receive the 2017 Woman in Racing Award from the Northeast Dirt Modified Hall of Fame on July 10 in Weedsport, NY. While the award recognizes her achievements in both facets of racing, Emig receives the honor at a time when her vision for the future of dirt track racing is starting to take a stronghold throughout the Northeast and Mid-Atlantic.

As director of Great Crate Racing Northeast, which is the corporate owner of the RUSH Racing Series, Emig does not fit the stereotypical image of the veteran promoter. In days of old, it was a gruff, grey-haired man, chomping his cigar and barking orders to his minions. In modern times, the promoter dropped the stogie, and dressed with the polished look of Fifth Avenue to attract marketing partners.

With steely blue eyes and blonde hair, Emig shines with a warm spirit of confidence. At first impression, curiosity abounds for veteran and rookie track observers. Within minutes, all realize that she is the real deal — a tough, hard-working woman with a track record of success.

“This award is an honor,” said Emig. “You look back and you think to yourself that someone has been paying attention. All those nights when you wonder why you do this, when you’re on the road, when you’re disqualifying a racer, or when you’re writing rules at 10 o’clock at night — it all comes full circle. To know the people throughout the Northeast know what we are doing and that it can be helpful for them, it means a lot.”


Emig’s love of motorsports stems from the love of her father, Bill Emig. The elder Emig owned Emig Disposal Service in Pulaski, PA. He excelled with his race cars too from 1969 until 1990, when he died of cancer. Competing throughout Western Pennsylvania and Eastern Ohio, the Emig #1 became well-known for its Ford six-cylinder engines in the Semi-Late and Modified divisions. Regional stars such as Jim Becker, Bob Krauss, Donny Martin, John Buzzard, Jerry Lesnak, Butch Haefke and Lou Gentile drove for Bill Emig.

Following her father’s death, Vicki Emig carried on his legacy. Gentile, Andy Priest, Jimmy Hawley, Frank Guidace and Rodney Beltz boosted the Emig-owned racers to over 300 feature victories overall. Over the years, she only ever missed one race when either her or her father’s car was slinging mud on the track.

“My dad always took me with him,” said Emig affectionately. “It didn’t matter whether it was going out in his garbage trucks on a cold winter morning, or going to race tracks bundled in a blanket — Bill always took his little girl.”

That little girl took over her father’s business following his death, and eventually sold it in late 1998. Her father’s dream was track ownership. Emig fulfilled that dream with the purchase of Mercer Raceway Park in January 1999. The third-mile oval prospered under her leadership. Over the 11 seasons she operated Mercer, the track transformed with major renovations, and hosted national events of all types. Emig focused on family entertainment and pricing that made the track a successful model for all short tracks nationwide.

“I look back now, and it was something I always wanted to do,” recalled Emig. “Not only for me, but for my dad. My mother, Ruth, worked in the office, and my sister, Jody, ran the concessions. I could not have done it without them. My mom actually never liked racing. But my dad always made sure that she and my sister could do whatever they wanted while dad and I went to the track.”

In 2007, Emig and her longtime public relations and race director, Mike Leone, branched into the world of crate Late Model racing. Emig sold Mercer in 2010 and focused her attention on crate racing. After operating a regional series for six seasons, Emig and Leone established a foundation for the class that expanded successfully in 2013 when they began the RUSH Racing Series.

“Mike and I wanted to take the concept of crate racing to a different level,” noted Emig. “We knew that the future of local racing hinged on developing a cost-effective approach with strict rules enforcement. Following that model, we continue to work with our manufacturers and marketing partners to help all of our race teams and sanctioned tracks grow, while providing race fans with some the best dirt track racing in the nation.”

“I am so excited by all our new ventures,” said Emig. “With the GM 604 and 602 engines in our various classes, we are reaching new heights. We compete on spec tires and fuel, and some divisions run spec shocks. This year, we will deliver to our race teams over $250,000 in point funds, contingencies and product giveaways combined, not including the purse monies paid at our touring and weekly series events.”

“We have earned the trust and respect of hundreds race teams and dozens of promoters. We continue to tweak and develop this concept, in order to make it better and better.”

And to think it all stems from being daddy’s little girl.

“It’s all because of him. If he hadn’t taken his little girl and bundled her up lying on the bleachers, we wouldn’t be here. He didn’t leave her home — ever.”