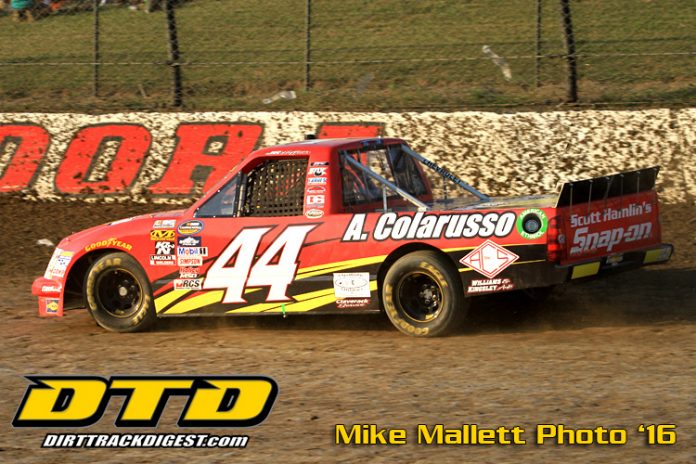 ALBANY NY- JR Heffner and JR Heffner Racing are excited to announce their return to the NASCAR Camping World Series Wednesday July 19th at Eldora Speedway in Rossburg, Ohio. This will be JR’s 4th trip to Eldora to compete in what has become one of the series’ most popular events.

JR will be piloting the #44 Chevy on Wednesday in a partnership with Faith Motorsports, and with the support of partners such as A. Colarusso & Son Inc., Park East Sales, Upstate Utilities, and Snap-On Tools (Scott Hamlin), as well as the team’s many loyal associate sponsors. The team is grateful for the support from their partners on their journey to Ohio, and is always welcome to bringing new partners looking to capitalize on the truck program’s national reach.

JR races both Big Block and Small Block Modifieds weekly at Lebanon Valley Speedway in West Lebanon, NY, where he has won 4 track championships, and is a three time Super DIRTcar Series Mr. DIRT Track USA winner. With all his success at Lebanon Valley, and across the Northeast such as winning the Hagerstown 350 twice, JR acknowledges that when it comes to the truck racing at Eldora there are differences from modified racing.

“As far as vehicle dynamics, the modified and the truck are very different.” JR said. “The truck is much heavier and does not have the big power or tire size of a modified. What does help us out at Eldora is working with Steve Hart and our experience with how the track is changing, what changes we need to make in response to the track, and our ability to work together with what I am feeling, and what he is seeing. We do that every week together, and I think that does help a lot.”


The #44 team had a big run last year at Eldora, qualifying 4th and winning their heat race. Mechanical issues stymied their run in the feature, but the team came back to NY with a 15th place, a more than respectable finish against the best truck series drivers and dirt track ringers in the 36 truck field. For this year’s event, JR and the team are treating it no different than any other race week.

“We are going to run as hard and clean as we can and make sure our partners, and fans know we did our very best for them.” JR relishes the opportunity to run with some of the best drivers around, and the opportunity is not lost on him “It is wonderful that a sport as big as NASCAR gives us the chance to compete against the very best. You can’t take your friends and line up against The Giants, or The Yankees; however, if you have the right equipment, support, and a solid team NASCAR will give you a chance at taking on their finest drivers and teams. We are very grateful and respectful of this opportunity, so we are going to race at our highest level, and cherish every minute of it out there.”

JR has ran at tracks such as Daytona International Speedway, Talladega Super Speedway, Kentucky and New Hampshire Motor Speedways, but for the driver out of Valatie, NY, and like all dirt racing fans, it always comes back to their first love… their home track. JR is always a threat to win on the high banks of Lebanon Valley, and a perennial fan favorite, but when he straps in at Eldora the Lebanon Valley Speedway community rallies around their own.

“Lebanon Valley is incredibly special to my family, and I hope this NASCAR race in some way allows me to thank all of the staff and fans there for all they have done for our team. They are a very big part of this deal.”

As JR and the #44 team put the finishing touches on the Eldora truck they are full of positive thoughts, and eager to hit the Ohio clay and put on another show on a stage as large as the one they will perform on Wednesday.

“I am really looking forward to two things” said JR. “First is the high level of competition amongst the drivers of the NASCAR Camping World Series, but also the challenge of making the race and performing well, balanced with being able to represent our dirt racing partners, and fans who support us week in and week out. I enjoy that we can bring our partners to a nationally televised race and give them the exposure and experience that is so unique to NASCAR’s only dirt race of the year.”

The Eldora Dirt Derby from Eldora Speedway will kick off Wednesday July 19th at 9:30pm, and can be watched nationally on The Fox Business Network, as well as radio coverage by The MRN Network.

To stay up to date with JR Heffner’s Eldora trip, as well as his Modified races the team can be found on Facebook and Instagram as @jrheffnerracing. The team also has a website: jrheffnerracing.com.