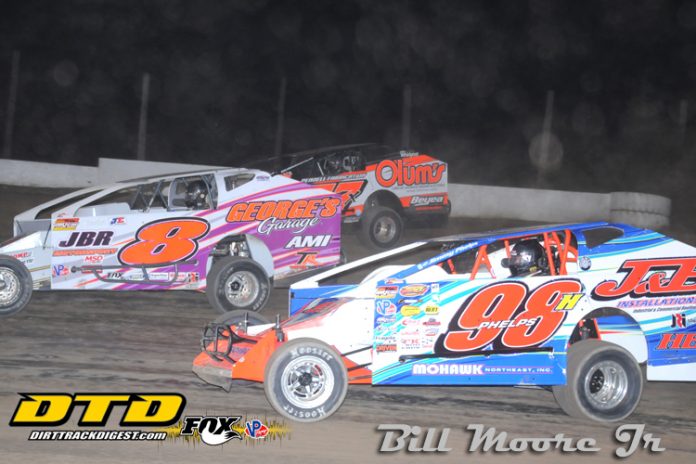 Phelps qualified where he started – second, placing him in the top-twelve redraw.

Phelps started on the outside pole for the main event.

“We were actually pretty good early,” he said. “Probably a little too good too early. We led some laps.”


Once the race went on the tires seemed to come into play on the No.98h machine.

“We lost some positions when the tires started to go away,” Phelps said. “We had to race pretty hard on restarts to hold our own. We made some contact and had to go into the pits to change the left rear tire. Things narrowed up so we made it back up to eleventh after that. We weren’t too bad but we didn’t have what we needed to make it all way.”

Teammate, Max McLaughlin, started on the pole and won his heat race by three seconds, locking him into the top-12 redraw.

McLaughlin started on the inside of the sixth row.

“I thought I was overheating during the feature so I pulled in,” he said. “We had a mechanical failure and were able to fix it. I went back out but was a lap down.”

McLaughlin was able to get his lap back and work his way back through the field to finish 14th.

The team then traveled to Merrittville Speedway in Thorold, Ontario on Wednesday with the Series.

Phelps finished fifth in his heat from his third-place starting spot.

Phelps rolled off on the outside of the ninth row for the main event.

“We were free right from the beginning,” Phelps said. “We’ve been really struggling on the slick tracks. I thought we were decent enough to hold our own. That place is though. It’s so slippery and slows down so much, which is when the small blocks run better.”

Phelps felt he wasn’t going anywhere. “I started to feel a little bit of a vibration as the leaders started to come up on me. I moved out of the way so I wasn’t in the way so I pulled off around lap 70.”

McLaughlin once again set quick time and won his heat, placing him in the redraw.

McLaughlin rolled off on the pole and led the first thirty laps of the main event but struggled once he caught up to lapped traffic.

Phelps closed out the week on a high note for the team at Brewerton Speedway.

Phelps went out and qualified fifth in his heat race, placing him 11th for the feature.

“Come feature time we started 11th and kind of got to the top five pretty quick,” added Phelps. “The race amongst the top five was really good. It was tough to find a gap to get around everyone.”

Phelps worked his way up to second with a few laps remaining and was able to chase down the leader in no time. Phelps found some clear track and was able to make the pass for the lead on the last lap to take home the checkers.

“It’s a little bit of a relief,” Phelps said. “More or less it was a little bit of a moral booster for everyone. I still think we’re in hunt mode trying to get a program back in the right direction. Hopefully we can build some confidence as we go through this final stretch of the season. After being pretty competitive at Ransomville and then coming back to get a win at Brewerton from mid pack was definitely a booster.”

McLaughlin finished where he started in the heat race – fourth, lining him up eighth for the main event.

“I was no good,” McLaughlin said. “It was tough but we finished.”

McLaughlin held on for an eighth-place finish.

The team was set to run at Fulton Speedway on Saturday but was canceled due to rain.

Strange Oval is a division of Strange Engineering, an industry leading company that has been manufacturing driveline and suspension components for all forms of racing and hi-performance vehicles since 1964. For more information on Strange Oval, visit www.strangeoval.com.

“Their driveline and axel components are second to none,” Phelps said. “They offer a wide variety of tuning capabilities that definitely give their customers an advantage”

“I can’t thank Simpson enough for their awesome products that keep me safe every time I strap into a race car,” McLaughlin said.