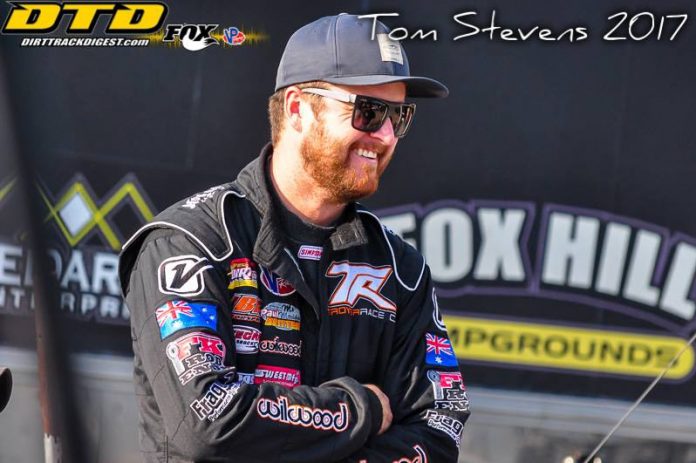 Britten made the transition this season to run his own equipment on the Series and has proven his abilities.

As the summer months begin to wind down, teams are starting to gear up for the bigger paying shows, in particular, Super DIRT Week. One of them being team owner Ray Graham.

With one series win and eight top-ten finishes on the Series, Britten won’t be behind the wheel of the familiarly owned No.21a for the prestigious race. Instead, Britten will be teaming up with car owner Ray Graham to tackle the 46th Annual NAPA Super DIRT Week at Oswego Speedway in October.


“He’s been to a lot of races this year, watching and paying attention, trying to decide what his next move would be,” Britten said. “I was fortunate enough he got in contact with me and offered me the chance to drive for him.”

Britten noted he will still sport his No.21a on the door panels but will be in a brand new Troyer racecar Graham plans to assemble for DIRT week. The new car will be the next evolution of the famous Mudd Buss.

“I want to put together what I feel is the best shot to win Super DIRT Week and I feel after watching the Series, that combination is Peter, Troyer Chassis and Enders Engines,” Graham said.

Graham had previously owned Supermodifieds for several years before dabbling into dirt track racing this season.

“He is very technical and likes experimenting with different setups and different cars,” he said. “Coming from the Supermodified world, it’s a real technical game so that’s why I think he enjoys that side of it and wanted to get involved with people that share his drive along with the pure on track side of things. Given Ray’s dedication to racing and my will to win, I don’t see why we can’t be a dangerous combination to deal with there.”

After keeping a careful eye on Britten’s success and dedication this season, Graham is confident with the new team combination.

“I wanted to get involved with someone that has an open mind to try new ideas,” Graham said. “Given the success Peter has had with the new designed Troyer and the thought processes that have gone into building this car, right now it seems like the perfect fit for me.”

This new lethal combination will make their debut at Oswego Speedway for the 46th Annual NAPA Super DIRT Week October 1-8.