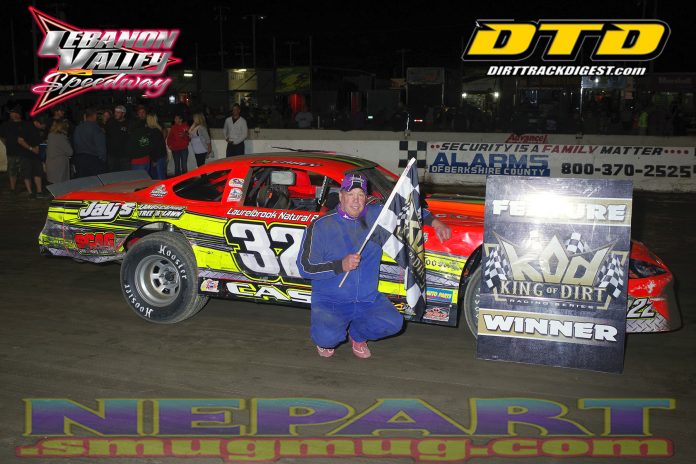 WEST LEBANON, NY – For three years when King Of Dirt Racing Pro Stocks roll into the valley of speed, fans are treated to some white knuckle, heart pounding, edge of their seat full-fender racing. Saturday didn’t disappoint when everyone in attendance saw one for the decades, as Jay Casey and Jon Routhier battled to the end with the 322 claiming victory by just .058 of a second.

After Rob Yetman, Jay Casey, and Jason Meltz won qualifying events it was Nick Stone and Jon Routhier who would lead the field to the green flag. Stone would make it to turn one first, but Routhier had other plans taking the lead on lap one.

Routhier would lead until lap six when a Casey came knocking. Jay Casey made a move to take the top spot away and that began an epic throw down for the crown between two veterans of the high banks.

Frank ‘wild’ Twing was making headway chasing the leaders down. While battling with the Tom O’Connor number 52 he lost his hood, but that didn’t slow down the 317. He’d pressure O’Connor and then Stone to move into third and set his sights on the front running pair.

DIRTcar Pro Stock tour winner Steven LaRochelle was having himself another night that looked like it may end in victory. He qualified well and was in the mix running top five early in the event, but handling went away on the 178 leaving the young gun with a frustrating ninth place finish.


The aforementioned Nick Stone came into the night just one point behind Rob Yetman for the 2017 King Of Dirt Pro Stock championship and ran well in the qualifying events. He’d find himself struggling in the feature with transmission issues, but managed to salvage a 10th place finish at Lebanon Valley leaving him just seven points behind point leader Rob Yetman.

A pair of drivers moving forward was Jason Meltz and Ed Bishop, as both started 10th and 14th respectively. Meltz would work his way up to a solid 4th place finish, which moved him ahead of Rich Crane in the Newcomer Of The Year chase. Bishop raced his way forward to earn a solid 6th place finish and the Hoosier Tire Hard Charger award.

Albany Saratoga Pro Stock Champion Kenny Martin Jr. claimed the Classic victory to start the KOD season and hasn’t let up since. He came into the Valley and gained points on second place Stone after starting 13th and finishing seventh. A solid run on the high banks has ‘Krazy’ Kenny just 14 points away from winning the crown.

Back up front and time was winding down. Casey who had managed roughly a three-car lead had seen that disappear in the closing laps, as Routhier was closing in. The pair ran door-to-door for the lead with Casey not budging from the topside of the speedway. On the final lap Routhier gave it his best shot, as he pulled nearly even with Casey off turn four, but the wile veteran held on for a very popular victory. Routhier would cross the line second followed by Frank Twing, Jason Meltz, and Rob Yetman rounding out the top five.

“We kind of fell right back into place tonight. Track was great, fast, and smooth. I thought I was going to have a problem with Rudy. He was coming fast on the bottom, but we were able to take advantage of the high side,” said Jay Casey after his big win at Lebanon Valley.

“It was an excellent race with a hometown guy like Jay Casey. They’re a bunch of great guys. It was really fun racing with him. I lost some rear brakes and he snuck by and I was trying to reel him back in, but there’s nothing more I could ask for. Car was great,” said Jon Routhier talking about his second place finish.

“That was a lot of fun. My hood came off early so I was able to keep it cool. My brakes were going away and my right rear was about shot and I thought oh man we’re in trouble on these double file restarts. But it felt good to be back and run up front and I like these three cars sitting here,” said Frank Twin while talking about his third place finish.

KOD NOTES: 26 strong Pro Stock competitors signed in for the Lazzaro’s Auto Body King Of Dirt Racing Pro Stock tour at Lebanon Valley Saturday August 26th. Jay Casey claimed his 1st career KOD Pro Stock win. Tech inspection went well with the Cam Doctor finding it’s way on the 322 of Casey and 51 of Meltz. Others in the top five were also checked. Rob Yetman came in one point ahead of Nick Stone and left seven points ahead. The championship will be decided Sunday September 17th at Devil’s Bowl Speedway for the Carl Vladyka Memorial. Drivers notably missing were Kim Duell and Byron Wescott, which both had been top 10 in point standings. They now reside 13th and 14th respectively.

NOTEABLE RUNS: One can’t talk notable runs without one more time mentioning the popular victory by Jay Casey in his return to Lebanon Valley where he spent many years as a regular. Frank Twing has run Fonda Speedway regularly in 2017, but returned to the Valley and found himself solidly third place at the end of the evening with a motor that once carried Derrick McGrew around the great race place. Jason Meltz motored to a fourth place finish, which moved him into the lead in Newcomer Of The Year standings. Ed Bishop moved forward during the feature event and came home as the Hoosier Tire Hard Charger finishing sixth respectively. Kenny Martin doesn’t spend a lot of time on the high banks, but chasing the KOD tour in 2017 he headed to the valley of speed and came home with a solid seventh place finish.