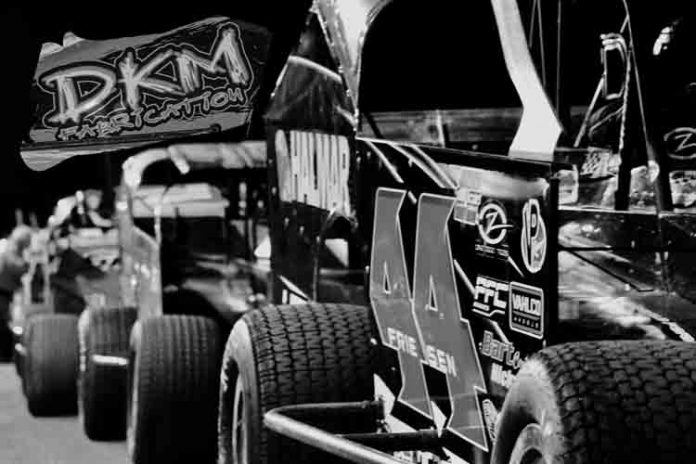 As the stars and cars of the Super DIRTcar Series descended upon Lebanon Valley Speedway to do battle on the legendary high banks, Stewart Freiesen and the Halmar International #44 DKM Cyclone chassis powered by a Performance by Billy The Kid power plant was a favorite to win the $17,500 101 lap event.

Friesen would finish the race with a solid third place finish running behind two Lebanon Valley Speedway regulars Eddie Marshall and Brett Hearn the eventual race winner. Friesen was the highest finishing invader on the night, a finish the team at DKM Fabrication views as a success.

The team made a few changes after the early warm ups and the Cyclone Chassis responded very well. The team was keeping an eye on the track conditions, and decided to make a few more small adjustments before the feature.

The pre feature changes seemed to help Stewart maintain his edge, especially on the restarts. Finishing the race third from the Friesen’s 10th starting position was a respectable finish for DKM considering the stout field starting ahead of them.

With the podium finish in hand, DKM feels confident leaving Mr Dirt Track USA with some very good notes to build upon, and as always great feedback from Stew.

DKM Fabrication has been developing the Cyclone Chassis over the last few years, but also create many parts race cars, as well as fabricating bodies. DKM fabricates their own parts on their CNC machine.

To learn more about the Fultonville, NY based DKM Fabrication follow along with their clients on their Facebook page: facebbok.com/DKM-Fabrication. Located at 218 Riverside Dr, Fultonville, NY the team at DKM can also be reached by telephone at (518) 441-5026.