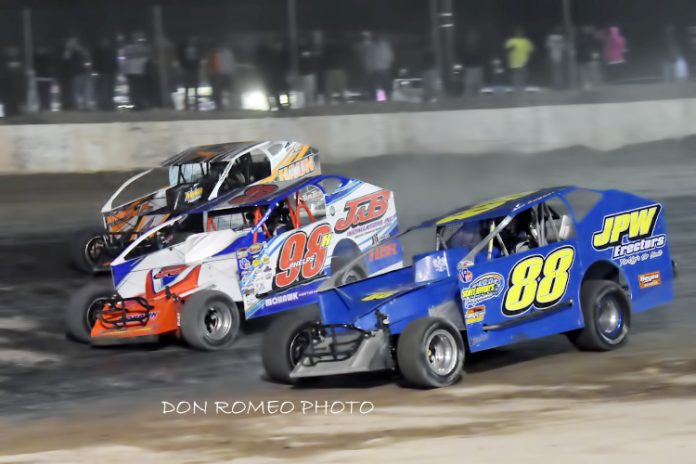 Mandee Pauch Relations – The HBR team closed our their weekly racing at both Brewerton Speedway and Fulton Speedway home tracks this past weekend.

Jimmy Phelps picked up two feature wins at Fulton and one win at Brewerton. Phelps rapped up the season second in points at both home tracks. Both were a very close battle to the final night.

Max McLaughlin took home a victory at both tracks. McLaughlin grabbed his very first career big block modified win at Fulton Speedway back in August. McLaughlin closed out the season with a fourth-place in points at Brewerton and sixth-place at Fulton.

“We were pretty good,” Phelps said. “For us, anytime you go there as an outsider you don’t have a whole lot of time to get comfortable. It’s a unique track. We were fortunate to be good off the truck.”


Phelps started on the pole of his heat and drove away to win it.

Phelps redrew third out of 12 for the main event.

“We lost some spots early in the race,” he said. “The restarts there are really lane dominant. Every restart we lost a spot or two. Once we followed in line we were pretty decent. I thought we raced a little bit too hard through the middle of the race then had to baby the tire at the end.”

Phelps closed the evening with a seventh-place finish.

Teammate, McLaughlin, ran into some trouble in his heat race.

“We put an older tire on and it didn’t take any heat,” noted McLaughlin. “We went into the corner and made contact with the wall.”

McLaughlin was unable to finish.

McLaughlin rolled off on the outside of the 14th row for the 100-lap main event.

“It was about halfway through the race we were running around eleventh and lost brakes so I pulled off.”

Friday evening was the final points race at Brewerton Speedway.

Phelps started seventh in his heat and drove through to finish fourth.

Phelps lined up on the outside of the seventh row for the main event.

“We had a really good car, I just had to work through some brake issues which was self induced,” noted Phelps. “I had my brakes screwed up and didn’t notice until the race was over. We were still able to get to third and poke our nose into the lead battle.”

McLaughlin charged from his seventh-place starting spot to qualify third.

“We tightened up a little bit after the heat which may have been too much for the feature,” added McLaughlin.

McLaughlin rolled off on the outside of the eighth row for the feature.

“I had a good car, we just tightened up a little too much,” he said. “It came in a little too late but we were able to drive up and finish sixth.”

McLaughlin finished in a strong fourth-place in points at Brewerton. His best points finish in a big block modified.

Saturday evening the team was at Fulton Speedway for their final points race of the season.

Phelps maneuvered his way from his eighth-place starting spot in his heat to qualify fourth, placing him 18th for the main event.

“Within ten laps we were in the top five,” Phelps said. “At that point we were chasing the leaders down.”

Phelps was running fourth when the driver in front of him spun his tires on a restart.

“I checked up and got bailed in the rear end which caused a huge chain reaction,” added Phelps. “The officials decided I was the one that turned him around so I had to go to the rear. It was a terrible call. We had a really good car so I had to play catch up after that.”

After restarting at the back end of the field Phelps came back through to finish third.
“We came about a foot short with the points,” he said. “I’m really disgusted with how the political side went down but am really happy with how the car was. I don’t think I ever had such a good car at Fulton before.”

McLaughlin started eighth in his heat race and drove up to finish third.

“We were passing for second and kind of got drilled into a tire by another car so we settled in for third.”

McLaughlin started on the outside of the eighth row for the main event.

McLaughlin was running in the top ten when he was wounded with a flat tire forcing him to go pit side. McLaughlin made it back out and capped off the night with a 13th-place finish.

Labor Day Monday the team was in their backyard with the Super DIRTcar Series for the Labor Day Double Play.

Phelps noted of their struggles at Weedsport Speedway but feels more confident after his results Monday evening.

Phelps won his heat from second, placing him in the top-12 redraw.

“We drove up into the lead battle for a while,” Phelps said. “I had the best seat in the house for the race for the win between Matt Sheppard and Stewart Friesen. All in all we were a few adjustments away from having a car that could win. We made some big strides at Weedsport. The track was pretty challenging but all in all we were really good.”

Phelps capped off his four-day race weekend with a solid third-place finish.

McLaughlin qualified where he started, in fifth.

McLaughlin rolled off on the outside of the ninth row for the main event.

“We were running in the top ten until we got a flat tire,” McLaughlin said. “I tried running with a flat as long as I could then the car started pushing pretty bad so I came in and fixed that.”

McLaughlin went back out and finished 15th.

McLaughlin may have had a tough weekend but he closed out the year with a win at both home tracks and showed a good running with strong finishes in both points chases.

“It wasn’t the greatest weekend but we’re looking forward to Quebec,” McLaughlin said. “We had a really strong run at Le RPM last year. It’s one of my favorite tracks on the tour.”

The team next heads to Quebec, Canada this upcoming weekend with the Super DIRTcar Series on Friday and Saturday.

“I have to thank Winters for their continued support with HBR,” Phelps said. “We really rely on the quality and durability of their rear end components. This spring has certainly been challenging on drive strain so we’re fortunate to have such great partners.”