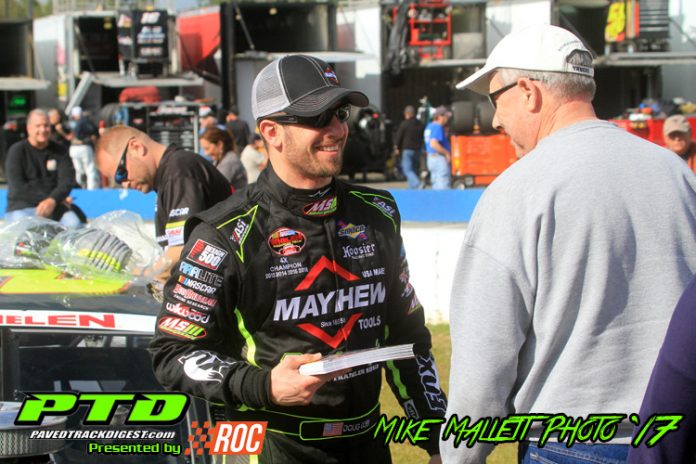 “Wow what an opportunity to participate in a meet and greet session for any race fan when you can say hello and get an autograph from the some of the past and present greats of Northeast short track racing,” stated Joe Lewandoski.

Reggie Ruggiero is the all-time winningest driver at Riverside Park Speedway. He was known as “The Reg” at The Park brought fans to his feet and was always a fan favorite. Ruggiero scored 44 wins on the NASCAR Whelen Modified Tour which is second on the all time list.

Dan Avery drove in the tour type modified division at Riverside Park Speedway. Avery won the 1995 championship at “The Park.”


“It’s blowing me away this whole thing. It’s probably the biggest honor of my career,” Avery Said

Chris Kopec drove the M6 and won the championship in the Tour Type Modifieds at “The Park” back in 1994.

“I am just excited to be apart of it. There’s a tremendous amount of talent and history at the same time,” Kopec said.

Kenny Tremont is a veteran dirt racer. He took down the 2017 NASCAR Dirt Sportsman championship at Devils Bowl Speedway in Vermont.

Jon McKennedy is the 2017 ISMA Supermodified champion. McKennedy clinched his first championship in the ISMA Supers. McKennedy is a multi time champion on the Valenti Modified Racing Series

Bob Polverari won the final race at Riverside Park Speedway back on October 17, 1999. Polverari a fan favorite racing in his famous # 711.

“Looking forward to attending it. There’s going to be quite a few of the drivers I know. It’s always exciting and hopefully we get a good crowd,’ Polverari said.

Billy Greco was a fan favorite at “The Park”. It was the main track for Greco. He and his wife used to go to the quarter mile oval on Saturday nights and that was their Saturday night out to go to Riverside Park to race. For Greco, it was exciting and he loved the place

“I am very excited. I’ll be there this Saturday,” Greco said.

The event will be held this Saturday from 9:00 a.m. until 7:00 p.m. Tickets are $10 for adults and kids 12 and under are free. There will be parking in The Riverfront Parking Lot and Free Shuttle Service Presented By King Ward Coach Lines to the MassMutual Center.

For more information on the show, please visit our website at www.neracersauction.com and the Facebook Page at New England Racers Auction/Trade Show