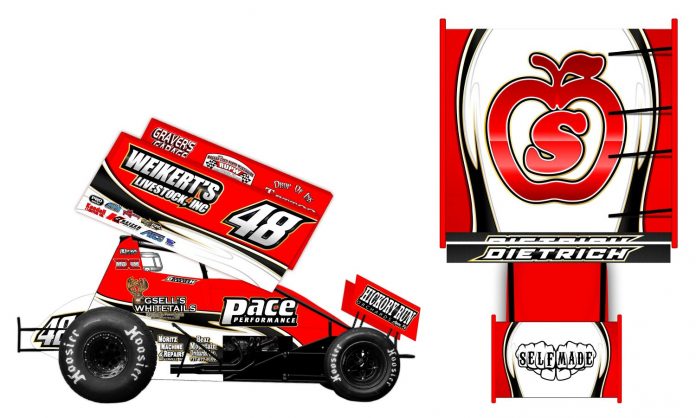 GETTYSBURG, PA – Celebrating an owner/driver relationship that will reach nine years in 2018, Danny Dietrich and Gary Kauffman Racing will tackle an intense schedule during the upcoming year, splitting their focus nearly 50/50 between competition in Central Pennsylvania and on the road. Unofficially, Dietrich’s plan is to join the World of Outlaws Craftsman Sprint Car Series and the Arctic Cat All Star Circuit of Champions for a combined 40 events during the new year, with the rest of his schedule molded around competition in the Keystone State. Tentatively, Dietrich will join the Arctic Cat All Star Circuit of Champions 26 times in 2018.

Unlike prior seasons, Dietrich’s Central Pennsylvania schedule will mold around action at Port Royal Speedway on Saturday evenings rather than Lincoln Speedway. In addition, Dietrich plans to miss action at Williams Grove Speedway on several occasions in 2018, making time to travel elsewhere if the opportunity fits.

“I’m pretty excited for 2018. We have a lot of work to do during the next few months, but we’ll be ready to go,” Danny Dietrich said. “We decided to change things up a little bit this year and race at Port Royal Speedway more often when we are home. I’m not avoiding Lincoln Speedway, but the majority of our Saturday nights will be at Port Royal when not on the road. A few Friday nights left open are also in the plan. We raced a lot in 2017. A few relaxing Friday nights at home won’t do us any harm.”

Despite the new look, Dietrich and Gary Kauffman Racing are pleased to announce that all major partners affiliated with the GKR program will return in 2018 including Weikert’s Livestock, Pace Performance, Sandoe’s Fruit Market, Gsell’s Whitetails, Hickory Run Orchards, and Self Made Motorsports.


“I’m fortunate enough to be surrounded by a great group of people who believe in me and my race team,” Danny Dietrich continued. “Gary Kauffman has been behind me from the beginning, as well as a long list of others who continue to push me and allow me to race at the level that I am at. It takes a lot of hard work and dedication to make a race team competitive and I appreciate everyone’s efforts.”

Keep up with Danny Dietrich and Gary Kauffman Racing during their entire campaign right here at the official online home of Fully Injected Motorsports – www.FullyInjected.com. Be sure to also follow Danny Dietrich online at www.dannydietrich.com, as well as on all of the available social media networks including Twitter: https://twitter.com/dannydietrich and Facebook: https://www.facebook.com/GKRracing/