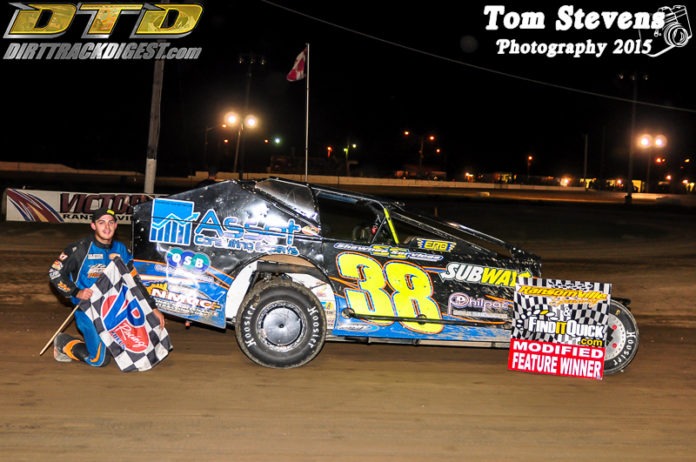 In addition, the Friends of Auto Racing inducted DeVere Bliss, Vincent Fullone, Hal Lawrence, and Mike Scroger into its Hall of Fame.

Susice never finished outside of the top six in capturing his third consecutive Ranosmville Modified title in 2017, becoming only the fourth driver in Ransomville’s 60 year history to pull off the Modified “three-peat.” Ryan also notched two victories and a top five points finish at Merrittville. In addition, he had some impressive runs in a 360 Sprint car, scoring an SOS Series win at Merrittville and racing the 360 to a 7th place finish in the World of Outlaws event at Ohsweken.

Catalano combined talent and versatility for a career year in 2017. He earned Sportsman Modified track titles at both Spencer and Holland, captured the Race of Champions points crowns in both the Sportsman and Late Model divisions, and gabbed seven top five finishes en route to a fourth place finish in Race of Champions Modified series points. Tommy also had a sterling back-to-front run in winning the Dave London Memorial Super Stock special at Spencer after having to qualify through the B-Main. Tommy joins his mother Amy as a Foar Score Driver of the Year award recipient.

A solid competitor in the late 1950’s and through the 1960’s, DeVere Bliss was a top Late Model pilot, competing at tracks such as Angelica, Cuba Lake, Olean, Hornell, North Collins, Holland, and Perry. Competing with the likes of Art Clark, Dick Flaig, Pete Tingue, Eddie Anchor, Storker McGurk, and Cliff Norton, he picked up numerous wins in his career including the Dean Layfield Memorial 100 at Angelica in 1962 and the Holland 100 in 1966. In addition, he captured the 1967 Perry New Car season championship. He mentored the careers of racing sons Vern and Mark, both of whom scored multiple track titles on their own. DeVere now joins son Vern as a member of the Foar Score Hall of Fame. Foar Score Vice-President Matt Druar made the presentation.


Race team owner Vinnie Fullone has long been known as someone who finds the correct pieces necessary for success on the racetrack, and provides the means necessary to keep that success going. He was part of the “dymanic duo” of asphalt Late Model racing in Western New York from the mid 1980’s through the 1990’s, as with Rick Wylie behind the wheel, the team earned seven Holland Speedway track titles. Vinnie’s son Sam would move into the driver’s seat, scoring a prestigious win in the 2002 Bud 100 at Holland, and then touring the east coast with the Hooters Pro Cup Series. Recently, the Fullones have focused their efforts in their home region in Sportsman and Late Model competition; the team was victorious in the 2017 Race of Champions Late Model event at Lake Erie. Vinnie is known as a friend to all racers, and often makes his shop available to competitors who need some space and assistance. Foar Score Membership Secretary Laura Schroeder made the presentation.

One of the early stars of the newly formed asphalt Street Stock division in the mid-1970’s, Mike Scroger would establish dominance at Perry, earning five track titles at the Wyoming County oval. 1978 was his banner year, as he notched championships at Perry and Lancaster, finshed second by a mere two points at Spencer, and took the NEARA Street Stock title. In 1980, he was victorious in two of the biggest Street Stock events held to that time, a 50 lap special at Cayuga Speedway, in which a edged Gary Schwab for the win in a thrilling finish, and the first 100 lap Street Stock race held at Perry, in which he lapped up through the third place finisher. He served as a coach and mentor for many drivers who strapped into a Scroger-Prentice race team Street Stock or Pure Stock. After retiring in the mid-80’s, he re-located to Florida, where he currently resides. Because of some current health issues, Mike was unable to attend the dinner; his sister, Sandy Scroger Stockwell accepted the award on his behalf. Foar Score Trustee Karen Wylie (one of Mike’s on-track rivals at Perry) made the presentation.

Hal Lawrence has been a fixture on the Western New York race scene for over 60 years as a racer, official, and car owner. Hal started on the track in the 1950’s, competing at Akron, Cuba Lake, and Buffalo’s Civic Stadium, winning the J-division championship at the Stadium in 1955. After stepping back from active driving, he became one of the more active flagmen in the area, handling the silks at many speedways in the area, most notably Lancaster and Holland, and for the travelling Can-Am TQ Midget organization. He assisted with the organization and promotions for the indoor TQ Midget events at the Niagara Falls Convention Center for a number of years. In the 1990’s, he became a car owner, fielding a TQ Midget for his son Dan to drive – he would add cars to his operations, and among the drivers getting time in his machine was a very young Stewart Friesen. For nearly 30 years, he has been pacing fields as the pace car driver at Lancaster; he has also served in this capacity for SuperDIRT Car Series events and currently handles this responsibility for the Race of Champions Modified tour. Hal has also been a past executive officer of the Foar Score Club. Foar Score Treasurer Tracy Thompson Reilly made the presentation.
The Christiano and Zacharias families received the Families in Racing Awards. Past Hall of Fame inductee Vinny Christiano, Sr. was one of the mainstays of the Can-AM TQ Midget Club in that organization’s early years, winning Club titles in 1975, 1979, 1980, and 1983, and has been a major team owner in the current NYPA TQ Midget Association, fielding as many as five cars in competition, and earning multiple championships as an owner. His sons Vinny, Jr. and Mark competed on asphalt in TQ Midgets and on the dirt with the Southern Ontario Sprints, and grandson Vinny III just completed his second season as a TQ Midget driver.

The Zacharias racing legacy started with Jim Zacharias setting the bar high with hundreds of feature wins and close to thirty track titles in a career that lasted for five decades. This Southern Tier family has had 18 different family members on the track at some point. Jim’s wife Shirley even climbed aboard a race car. Jim and Shirley’s six sons – Rick, Bill, Tom, Terry, Chris, and RJ all followed their in father’s footsteps, with all scoring victories, and Bill, Rick, RJ, and Chris earning track titles. They also operated the Tioga Motorsports Park from 2002-2005. The third generation is making its mark, as Terry’s sons Jimmy and TJ have continued the family’s winning tradition, as both have earned Chemung track titles and Jimmy has been a multi-time NASCAR Whelen All-American Series New York State Champion. RJ’s son Garrett is the 2017 Chemung Bandolero Champion; among his competitors in Chris’ son Seth. Rick’s daughter Rachel took the 2017 Skyline Rookie Sportsman title; her brother Dylan also competes in the Skyline Sportsman class. Bill’s son Steven is the current General Manager at Myrtle Beach Speedway, while brother Brian is a past racer at Tioga. Jim’s daughters Tracy and Bonnie have also passed the racing bug to their kids, as Tracy’s sons Michael and Kyle Ferris and Bonnie’s son Chet Dillenbeck have carried on the family racing tradition.

Car fabricator/engine builder Bill Eschborn was the popular recipient of the Dick Hammond Dedication to Auto Racing Award. Besides being providing top notch racing machines, Bill has long served as a mentor/sounding board/helping hand to anyone in the pits needing assistance for over 40 years and is connected in some way to over 50 track championships.

Longtime area racing official Jerry Ward was likewise warmly greeted by those in attendance as the recipient of the Perseverance Award. Jerry has been dealing with some major health concerns, but has not let that keep him from his official duties at Freedom and Holland.

The Mechanical Achievement Award was presented to former top driver and current engine builder Sonny Barron, who at 80 + years of age, is still very much active in the sport. Humberstone Speedway owner/promoter Linda Cosco was honored with the Woman in Racing Award. The Media Award was presented to the Canfield Family/MoJo Photos.