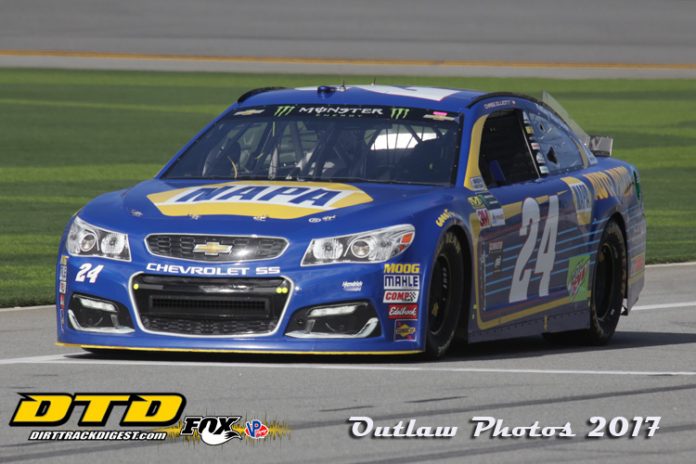 OAKS, PA – When the 33rd annual Pioneer Pole Buildings fueled by Sunoco & distributed by Insinger Performance show takes place January 19-21 at the Greater Philadelphia Expo Center in Oaks, Pa the Pocono Raceway will be an even bigger part of the show.

Pocono, which has participated in all past 32 Motorsports Racecar & Trade Shows will be offering fans a first time opportunity to see the new Chevrolet Camaro ZL1 that will be driven by fan favorite Chase Elliott on the NASCAR Monster Energy Cup Series circuit in 2018. Also new on the new Hendrick Motorsports Chevy will be the number. Elliott drove a No. 24 since he replaced retiring driver Jeff Gordon. In 2018 he’ll be switching to the No. 9 used by his Hall of Fame father Bill Elliott during his career.

Pocono has expanded their booth, located right in the main entrance area, to also include an IndyCar entry. This season the two mile triangle shaped track will be offering NASCAR Monster Energy Cup, Xfinity, Camping World Trucks, ARCA and IndyCar races. Show attendees will be able to gain all the needed ticket and schedule information on Pocono’s new season at their booth.

Tony Stewart has announced that he will be part of the three day show making an appearance to sign autographs and talk with fans about his NASCAR Cup and Xfinity teams, as well as his dirt Sprint car efforts during Saturday show activities.


An expanded hardcore racing section will include speed equipment suppliers, parts manufacturers, engine builders, chassis builders, apparel companies and much, much more. Not only with the latest products be on display but great at the show prices for cash and carry will be available to those looking to build their inventory while saving money.
Many of the 150 race tracks located within 200 miles of the show will have displays and will offer the latest information on plans for 2018. The show will also include the display over of over 200 race cars of all kinds. The former Pine Brook Speedway in northern New Jersey will be remembered in a special display of race cars. A Pine Brook reunion which will include driver autographs will be held on both Friday, the night the track held competition, and on Saturday afternoon.

A variety of seminars will be offered free to attendees on subjects of interest to racers.
One of the most popular events of the three day show is the annual Oliver Construction sponsored Ms. Motorsports Pageant which will take place Saturday evening.

Entries for the Pageant are currently being accepted. Ladies between the ages of 18-35 who are outgoing, with a high-level of energy and some knowledge of motorsports are encouraged to enter the competition. No talent or pageant experience is necessary.
Sunday is Kid’s Day at the show highlighted by the Tiny (4 to 7 years old) and Little (8 to 11) Miss Motorsports Competitions and the annual RAACE Big Wheel Races. All children 12 and under are admitted free of charge on Sunday.

Applications and rules for the Ms., Tiny and Little Miss Motorsports competitions can be found along with all other show information at www.motorsportstradeshow.com. Children who wish to enter the Big Wheel races need to only enter before noon at the event stage area.

Time is running out to arrange display or to have your race car on display at the show.
Check out www.motorsportstradeshow.com or call 609-888-3618 for further information.