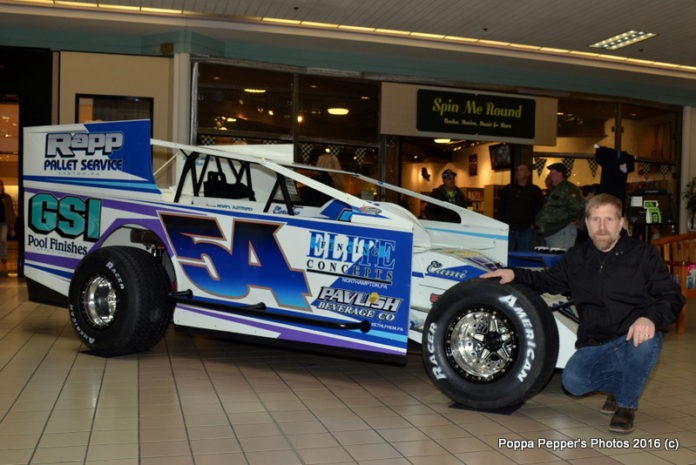 PHILLIPSBURG, PA – The dates for the popular eleventh edition of the week long Quaker Steak & Lube Dirt Track Heroes Show have been confirmed for 2018 and the hard-working staff and historical groups and speedways are putting all of the necessary pieces in place to once again produce another top-flight show. The successful annual event will once again begin its week long run at the Phillipsburg Mall located off Route 22 East in Phillipsburg, New Jersey beginning on Sunday, March 4th and will run through March 10th. The upcoming show encompasses the majority of the local short track scene and has become a must go to event for the local Tri-State area. Quaker Steak and Lube has taken on the lead sponsor role for the fourth consecutive season.

Quaker Steak & Lube is an award-winning casual dining concept known for its Best Wings USA and over 25 signature sauces, is fully prepped and geared as the lead sponsor for the trend setting 11th Annual Dirt Track Heroes Car Show set to take place at the Phillipsburg, NJ Mall. The original Quaker Steak restaurant was built in 1974 in an abandoned gas station, has grown in stature ever since and now highlights their fabulous chicken wings and the wide variety of signature sauces used to season them. There are more than 55 restaurant locations, operating in eastern Ohio, New Jersey, NewYork, Colorado, Louisiana and Florida as well as western and central Pennsylvania. The Pohatcong Township (Phillipsburg, NJ) Quaker Steak & Lube is located at 1304 US Route 22, Phillipsburg, NJ, and welcomes all race fans and families to stop by their location when visiting the New Jersey area to get re-charged and re-fueled, whether taking in the Dirt Track Heroes show or stopping by whenever in the area.

Joining the list of sponsors for the event in 2018 is our good friends at Upstate Auto. “The Godfather of Racing” Marty Dibble has graciously lent his support to the show after speaking with show organizer Steve Pados. Marty has been a longtime sponsor to the excellent racing at the Accord Speedway, heading up the sponsorship for the affordable Pure Stock division competing at the speedway and assisting at many other speedway events during the season. While Upstate Auto is coming onboard as a first time sponsor for the show, Marty has helped many racers in recent years including, Ed Dachenhausen, Mark Pullen, Josh Marcus, Jimmy Wells and Heidi Hedin to mention just a few. Upstate Auto is a welcome addition to the show and they are located at 4895 Route 9G in Germantown, New York. The number to reach them is: 518-537-2277 or through their website at: www.upstateautoinc.com<http://www.upstateautoinc.com>. On site they have a great selection of quality pre-owned cars as they are the number one source for quality used cars in New York State. The automobiles are available in a price range that is easy on the wallet. They specialize in easy financing. Good credit, no credit, bad credit, it isn’t a problem for the Upstate Auto Team if you have proof of income and residence, “BINGO”, you will be approved. Family owned and operated with more than sixty years in the automobile business, make Upstate Auto your go to place when seeking a quality vehicle for transportation purposes. Thanks to Marty and Upstate Auto for becoming a part of the Dirt Track Heroes Team. Just as his friends will say, “Marty has hot deals, those real deals those super steals, Marty has great cars, their whistle clean their shining stars.”

For the eleventh consecutive year, IRCO Community Federal Credit Union will once again lend their solid support to the popular show. IRCO was formed in 1966 and has grown in leaps and bounds to it’s present state today. IRCO remains a locally-owned and staffed community financial institution. IRCO Credit Union serves over 8,000 members offering a wide variety of financial products and services and serves the towns of Phillipsburg and Alpha as well as the townships of Franklin, Greenwich, Lopatcong and Pohatcong in New Jersey and the counties of Northampton and Lehigh in Pennsylvania. IRCO membership us open to individuals who live, work, shop, attend school, worship or volunteer in any of those communities. As a community based financial institution, all loan decisions are promptly made in their offices by onsite lending personnel. Information about IRCO’s various financial services and products is available at www.ircocu.com<http://www.ircocu.com/>, by telephone toll free at 800-538-1572 or stop by their offices located at 450 Hillcrest Blvd in Phillipsburg, NJ and 2240 Northampton St in Easton, PA.

The schedule of events for the eleventh edition of the Dirt Track Heroes Show will be released shortly and this great local event will remain focused on the past, present and future of the sport with special recognition to the many legendary stars the racing fans cheered on from the grandstands to the new wave of stars and the future stars who are now cutting their teeth in the entry levels of racing in quarter midget, go kart or junior slingshot ranks and determined to be the next driving stars in the sport..


The Phillipsburg Mall has proven to be a popular setting for this special event and will once again offer many varieties of new and vintage race cars, racing memorabilia, collectibles and photos on display throughout the Mall for the duration of the show’s run. The ten previous shows have brought out race cars from all divisions of motorsports filling the Mall space as the past, present and future of racing have been highlighted in a week long show celebrating the love each of us has found in attending races and meeting so many wonderful people associated with the sport. Last year’s event broke many of the existing records as 162 cars made their way into the Mall walkways. With an exciting and diverse schedule of events to whet the appetite of any true race fan, large crowds are expected to flock to the show to fill the wide aisles of the Phillipsburg Mall for the upcoming tenth edition of the show. This event is truly the Mall favorite and one of the leading attractions, continuously drawing outstanding crowds and successful events promoter Bob Miller and his wife Donna spearhead the hard working staff of individuals responsible for the continued success of the show.

The restored and original race cars represent racing’s past or what many race fans refer to as the “Golden Era” of auto racing. The great spirit of the event takes the great fan base of racing back to a special time in their lives when they could hop into their family jitney and travel less than a half hour to witness the excitement and spectacle of a night at the races. Some of the cars in attendance will be original works, some of the race cars are replicars of famous cars re-created to look much like the racers the legendary drivers drove to glory at one of the many speedways that hosted racing events. The great cars and the preserved memories gain far more impact when the fans have the opportunity to chat with many of the legendary drivers who will be making special appearances at the Mall during the week long event. All historical racing groups including Tri State, Nazareth, Harmony and Reading will have their memorabilia on display and their many scrapbooks open for the fans to take another long look at the glory years of racing and possibly find a picture or two they want to purchase as a keepsake from past glory or racing exploits.

Current day race cars are displayed by race teams to gain fan exposure and interest for themselves and their sponsors and create the “buzz” for the mall walkers to visit a race track in their immediate area. The cars are displayed to also exhibit the new and changing technology associated with racing and with the many restored race cars on site, depicts the evolution of the many eras of racing ingenuity. The fans can visit the Dirt Track Heroes Car Show and on any given night, meet the guys and gal drivers who pilot these four-wheel high-powered race cars. Many race tracks participate in this event as a way to distribute their yearly racing schedules for the upcoming season and to meet and greet their loyal fans and hopefully win over some new fans to attend racing events at their respective facilities. The show remains FREE to the public as it has been since first landing at the Phillipsburg Mall eleven years ago.

In previous events, cars on display included big block and small block Modifieds, Sportsman, all divisions of Micro-Sprints, all divisions of Sprint Cars, Drag Racing cars, Slingshots, Stage One Modifieds, X-Cel Modifieds, Late Models, SpeedSTRS, Go-Karts and a broad variety of vintage and restored race cars. Many speedways will be involved with the 2018 edition of the show. The week-long event will set aside one evening to salute the “Stars of Tomorrow” with a special night for the budding young racing talents competing with the many quarter midget clubs in the area and this night has proven to be one of the highlights of the week as many of the youngsters will be giving their first ever interviews to a large crowd.

The Dirt Track Heroes Car Show will again offer a great tribute keepsake event souvenir program book and shirt. The Phillipsburg Mall is open Sunday 11 AM to 6 PM; Monday through Saturday from 10 AM to 9 PM. For Quaker Steak & Lube Dirt Track Heroes information, contact show organizers Bob and Donna Miller by phone at: 443- 513-4456, via e-mail at: TOTHILL98@aol.com<mailto:TOTHILL98@aol.com> or at their website: www.thunderonthehillracingseries.com<http://www.thunderonthehillracingseries.com>. or contact Steve Pados at: 484-784-7756 or through email at: steveswp@ptd.net<mailto:steveswp@ptd.net>