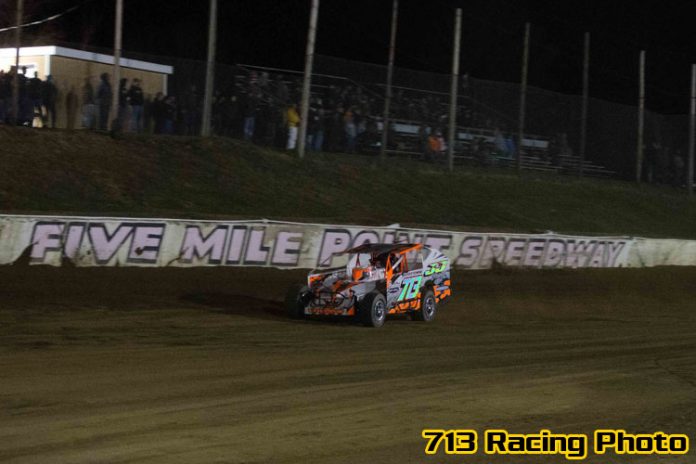 LANSING, NY – After a very successful 2017 year for 713 racing, its time for a change. The Car Owners Jacqueline Payne and James Traphagen and driver Tommy Collins have decided to change their saturday night home.

“After me and James talked on Monday along with weighing our other options, we had something open up at Five Mile Point Speedway so that’s our new Saturday night home..” Tommy said “My dad raced there, and where I learned to race myself, we want to go for a Championship at the track I was at as a kid. With Five Mile Point having off weekends we plan to return to Thunder [Mountain Speedway] when they are not racing and some of their special shows.”

Another new thing for the team will be following Brett Deyo’s Short Track Super Series. They hit a few shows last years of Brett’s and want to hit more.

“We plan to follow both the North and South Region. We are excited to get down Georgetown in march to help kick off both the Sportsman and Modified Portions of his tour.” He said. “It’s something all of us on the team are looking forward to, especially Jackie, after finding that Bridgeport show in 2015, she’s always looking. We hope to be at his Hard Clay Open show at Orange County in April. We really like what Deyo has, he has just a North and South region, he makes it simple and easy and the cars he draws are good ones.”


With Following Brett Deyo’s Series, they had to give up something from 2017.

“We ran a lot better in 2017 on American Racers than we did with Hoosiers. Now that doesnt mean to say we wont show up at Weedsport and other DIRT shows, we just want to have fun this year and when we can we will.” Said Tommy. “I couldn’t tell you why we ran better with AR’s, maybe I’m just used to them more, but we had better results with them. We wish we could run the Dirt Car Central Series again but we don’t want to stretch ourselves too thin.’

James and Jacqueline are just as excited as Tommy is for the upcoming season.

“We won Car Owners of the year at Thunder Mountain last year.” Jackie Said. “We are so happy to have won our first Championship with Tommy and his first with us. We can’t wait to go back to Outlaw Speedway in the spring for another year, we have fans there and love their program. We weighed our options and we saw the results last year on American Racers vs Hoosier and we were better with American Racers.”

As for the plan in 2018, Jackie says “We did not miss one A-Main in 2017 and we entered 70 events, we hope to do that again in 2018. We want to win 2 Track Championships this year, we were 3rd at Outlaw and came close last year, we want it all this year. We cant wait to see our fans at the Motorsport Expo at NYS Fairground on March 10th and 11th, we will have a car there. It’s been such a long offseason and we are ready to get this thing rolling at Georgetown on Saturday, March 17th and to kick off the season at Five Mile on Saturday, March 31st. Only Time will tell but we are ready to get started.”