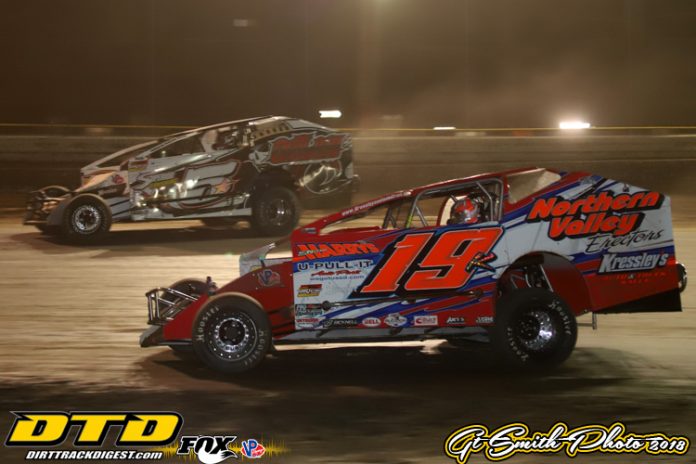 “The week was really exciting,” Kressley said. “I enjoyed the experience a lot, and I’m already tentatively putting it on my schedule for 2019.”

In four nights, Kressley crossed the line ninth, 17th, 22nd, and one spot out of qualification in the opening night’s Last Chance Showdown, but those results don’t tell the full story.

After night one rained out, Kressley started deep in the field in the Last Chance Showdown on Wednesday, the first night of racing action. He drove from 10th to finish fourth, just one spot from qualification, but was the only driver to advance more than two spots.

“The consi definitely gave me confidence for the next night, just to be passing cars and moving forward,” he said.


That was obvious on Thursday, the second night of racing, when the driver aboard the Kressley Auto & Truck Sales-sponsored No. 19K moved from 10th to sixth in the heat race, just missing a transfer spot, but again was the biggest mover, passing drivers like Jimmy Phelps and Tim Fuller, two Super DIRT Series regulars. Finishing sixth in the heat placed Kressley on the outside of the front row for that night’s Last Chance Showdown. With just two cars qualifying, the 25-year old jumped out front at the drop of the green flag and led all 10 laps to capture the victory.

In the 30-lap main event, Kressley turned his 21st-starting spot into a top-10 finish, crossing the line in ninth, again passing as many cars as any driver in the field.

“That night really felt like a win, especially to drive through the field like that,” Kressley said. “The crew guys were really excited, and a lot of people came over to talk to me afterwards.

“It’s all about confidence,” he added. “Racing with the DIRT guys, the best in the business, and to be competitive and passing them was exciting.”

On Friday, Kressley timed the best he did throughout the week, earning a sixth-place start in the heat race. Despite being relatively unfamiliar to the time trial format, he would have liked to do better.

“I should have trusted myself more, and I kind of overthought time trials,” he said.

In the heat race, he advanced one spot, finishing fifth and earning a spot in the feature event. However, the track “rubbered up”, confining the high-banked half-mile oval to one true racing lane, providing a tough track to pass on. Kressley moved up two spots, finishing 17th from his 19th-place starting spot.

On the final night, Kressley qualified 10th-fastest in his group, but again maneuvered his way to sixth, one spot from transferring. In a stacked Last Chance Showdown, he started second and needed to finish inside the top three, but had to compete with Larry Wight, Brett Hearn and Tim McCreadie for a qualifying position. Kressley settled into second for all 10 laps to earn another spot in the feature event. Ironically, McCreadie, who finished fourth, earned a provisional and eventually drove from 27th to win the event.

In the feature, Kressley was on the move again, this time coming from 24th to seventh with still 15 laps of the 50-lap event remaining, before he felt a vibration and pulled into the pits.

“Overall, I’m very happy with what came out of the week,” he added. “The weather was awesome, the racing was exciting, and it was a good, fun family experience.”

Despite being in the warm Florida weather, the week wasn’t spent at the beach.

“It is definitely a racing trip.” Kressley explained, “We didn’t do much but race and work on the car. After each night, we’d take it apart and wash it, and check nuts and bolts before putting it back together for the next night. The guys were awesome, and I can’t thank everybody enough for the experience.”

Brett Kressley Racing would like to thank all of its sponsors, and especially Kressley Auto & Truck Sales, Harry’s U-Pull It, Northern Valley Erectors, Bicknell Racing Products, Enders Racing Engines, Morgantini Racing Engines and everyone on the crew for their support.

NEXT: Brett Kressley Racing will head to Georgetown Speedway on March 16 and 17 for a Small-Block Modified race and the series opener for the Bob Hilbert Sportswear Short Track Super Series Fueled by Sunoco South Region. 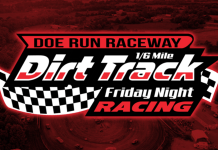