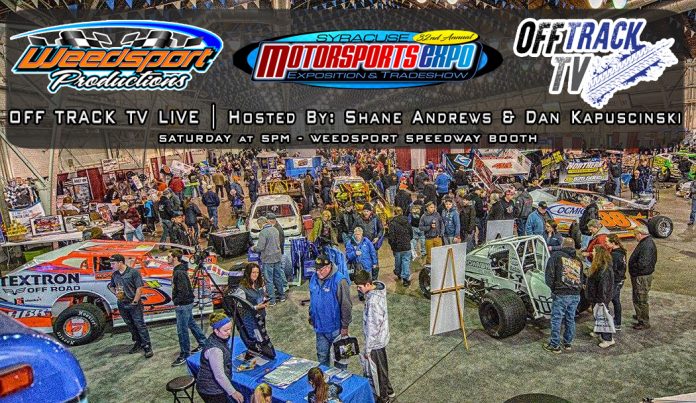 WEEDSPORT, NY – Off Track TV is coming to the Syracuse Motorsports Expo inside the Center of Progress building on the New York State Fairgrounds this Saturday, March 10 with a LIVE taping of its fourth episode, beginning at 5 p.m. within the Weedsport Speedway show booth.

The night’s broadcast will be live and interactive with fans inside the Expo and will also be shown on the web through YouTube Live at the Weedsport Productions Facebook page and on the Off Track TV website at www.offtracktv.com.

Off Track TV is aimed at bringing exclusive online programming to dirt track fans, highlighting news and events from around the sport while bringing fans closer to the drivers and teams they know and love during the off-season. For the first time, the show will be brought live to its followers this weekend.

“The Syracuse Motorsports Expo offered us a perfect opportunity to bring Off Track TV to a live audience,” said Weedsport Productions General Manager, Bret Moses. “We’re planning close to two hours of coverage as Shane and Dan give fans inside the Expo an up close and personal view of drivers and promoters, while giving fans outside of the area an opportunity to be a part of the action. We hope everyone will enjoy a fully interactive weekend with Weedsport Productions and Weedsport Speedway.”


Prior to taping, Weedsport Speedway and Weedsport Productions invite fans and followers to gather for a series of giveaways during pre-show festivities at 4:30 p.m. Just 30 minutes later, the lights will go up, and the show will be on.

For more information on the Syracuse Motorsports Expo visit online at www.syracusemotorsportsexpo.com.

Interested in seeing your company listed in our press releases? Be sure to call Tana at the Weedsport Speedway office at (315) 834-3067 for sponsorship and advertising information.
For more information on Weedsport Speedway, visit online at www.weedsportspeedway.com, follow on Twitter @WeedsportSpdwy and LIKE on Facebook.
Interested in submitting a story idea to ‘Off Track TV,’ sponsoring a segment, or perhaps advertising within the show? Contact Bret Moses at bret@weedsportproductions.com or (315) 430-3494.