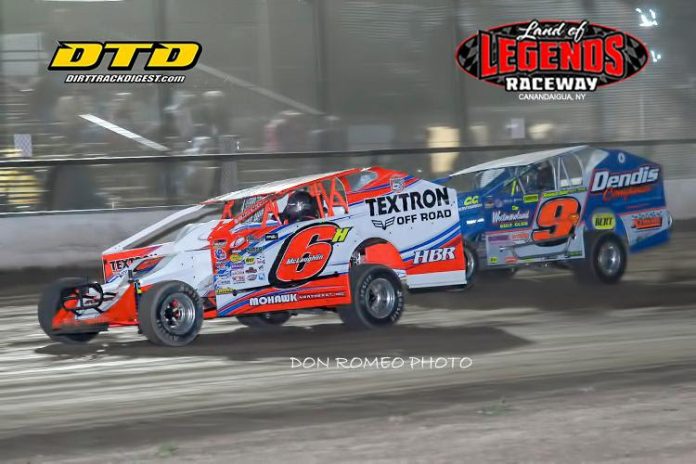 Progress was made this past weekend for the Heinke-Baldwin race team after collecting five top-ten finishes during their busy three-day weekend full of racing.

Friday evening saw the HBR team at Brewerton Speedway to kick off their season opener.

The evening opened with Jimmy Phelps finishing second in his heat race. With luck of the draw, Phelps lined up fifth for the main event.

“I thought we were good enough to win but Larry (Wight) ended up beating us to the front; he started third,” Phelps added. “We were kind of the same, but he had the preferred line. We never could really muster a charge until the end. We started gaining on him, but we ran out of time.”


Phelps capped off the opener with a strong second-place finish.

Max McLaughlin finished second in his heat race, placing him in the top-12 redraw.

McLaughlin drew the outside of the third row for the main event.

“We got too tight,” noted McLaughlin. “We didn’t make the right adjustments for the feature and ended up eighth. I was working the bottom and then somebody hit a tire and moved it out which kind of screwed up my line. The track was pretty good for the first night out though.”

Phelps started sixth in his heat race and finished fifth, placing him on the outside of the sixth row for the feature.

“We got up to third and were working on chasing down the leaders,” Phelps said. “We had a yellow just after halfway. That yellow turned into another long yellow and then it started raining during that long yellow. They dropped the green while it was raining, and everything went haywire, everyone was sliding all around, and we fell back to fourth when they called it. It was a disappointing end that was shaping up to a pretty good run for us.”

The rain cost Phelps a few positions, resulting in a fourth-place finish.

McLaughlin started sixth in his heat race and finished fifth, lining him up eleventh for the main event.

“We got up to sixth and it started raining with ten to go so they called it,” McLaughlin said. “We felt pretty good but with the rain, we ended up sixth.”

Phelps was strong right out of the trailer Sunday evening at Weedsport Speedway for the Ice Breaker.

Phelps started third and charged forward to win the heat race, placing him third in the 50-lap main event.

“We had a super strong car all night,” noted Phelps. “We got the lead and actually were able to pull away every restart. I had a really good car that had the capabilities of winning. Around lap 25-35 a brake fitting got sheared off in the rear brake system. When we lost brakes, it killed me. We lost a bunch of speed and fell back to third.”

Phelps was disappointed with the outcome but is keeping his head high.

“It wasn’t the results we wanted but we’re stronger than we’ve been in a long time. We just have to keep pushing.”

Phelps capped off the three-day weekend with a third-place finish.

McLaughlin had quite a bit of work cut out for him on Sunday.

“We started eleventh in the heat race,” McLaughlin said. “It was hard to pass. Everyone was running the bottom and if you went to the top it was a little bit slower. I was able to get up to ninth.”

McLaughlin’s ninth-place finish placed him seventh in the b-main and was able to slice his way through the field to make the final transfer spot.

McLaughlin rolled off on the outside of the 13th row for the 50-lap main event.

“We’re playing with some stuff and trying to find something before the Super DIRTcar Series gets rolling,” he added. “We haven’t really found anything on our side yet. Jimmy’s been really good. We’re going to go back and forth with each other and try some stuff that they’ve learned for this weekend.”

McLaughlin was able to rebound from a deep starting spot to finish 13th.