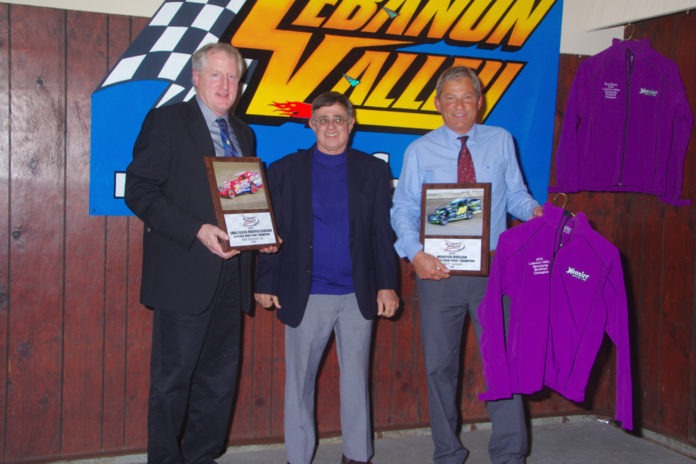 Those who watched this modest driver’s rise over the years probably remember a tall, lanky, fair-skinned freckle-faced kid who didn’t say a whole lot. But over the past 36 years, Tremont has certainly done his talking on the race tracks, steering his family name and dad’s cars to championship after championship.

“I can’t remember a time when there wasn’t a race car here,” Ken said of his father’s garage. Better known as “Big Ken,” the senior Tremont — himself honored as a Hall of Fame mechanic in 2000 — fielded winning rides for drivers like Ken Goodermote, Joe Messina, Frankie Schneider and Chuck Ely. Young Ken gathered every morsel of knowledge that came from hanging with the boys in the race shop.

And then, along came Will Cagle.


“He was the first driver I really took notice of,” Tremont said of the early ’70s celebrity at Vermont’s Devil’s Bowl Speedway. “The guy went good, he had his act together and he had one of the better controlled cars. I spent a lot of time watching him, because he was doing the job right.”

It was evident early on that Tremont was going to be a career “weekender” at one speedway or another throughout his life. He was a true-blue, born-and-raised race fan and racer: After a road trip to Super DIRT Week, the premier event for dirt Modifieds on the NY State Fairgrounds mile, Ken was forever hooked.

“I can remember going there for the first time as a teenager and I was so overwhelmed,” Tremont, 56, recalled. “I was exposed to guys like Balough, Tobias, Treichler, Jack Johnson, who were doing it right, and that was priceless. It was a great experience for a kid, to see how other people did it compared to how we did it back home in our garage.”

Tremont would eagerly hop off the school bus and head to the shop. Big Ken finally allowed him to warm up the race car at the track.

“I don’t know if I ever really made a decision to drive until I was 14 or 15 years old. I thought, boy, this is a lot of work! And if I was going to do all this work, then I might as well drive it, too,” Ken laughed. “I was lucky that we had a second race car and I could take it out around the house and learn how to use the clutch and brakes. At the track, I would start in the back to get some practice time without being in the way.”

Tremont’s first official season was in 1979 at Devil’s Bowl. He started late that year, as his mom Anne made him wait until he finished school before focusing on racing. The next year, he was running regularly at Lebanon Valley and at the Bowl.

“I was lucky to have an experienced pit crew that had worked on my dad’s cars for 20 years before I became the driver. So the learning curve for me got shortened-up real quick,” said Tremont. The Modifieds the team prepared “were bullet-proof. I got full laps in, lots of laps. We may not have been the fastest, but we were going to finish races.”

Tremont became the team’s primary driver at age 20 in 1982, the same year he scored his first career win at Lebanon Valley.

“It was May 29, 1982,” said Tremont of his first victory lane experience as a driver. “I still remember it like it was yesterday. It was great! I thought, wow, this is pretty neat, this is what it’s all about. The whole year turned out to be pretty good.”

That same season, Ken also won his first Modified championship at the Valley — and the legend began.

As the years accumulated, and the laps accumulated, so did Tremont’s success. He took wins at 20 different race tracks; secured 13 Modified and four small-block titles at Lebanon Valley; became the winningest driver at the Valley (with 130 Modified and 28 small-block victories, and counting); garnered 13 Modified point titles at Albany-Saratoga, eight at Devil’s Bowl, and single championships at Rolling Wheels, Utica-Rome, Weedsport and Glen Ridge; two overall CVRA championships; and two Mr. DIRT 358 series titles. Add in the win that trumps all others — the career-making Super DIRT Week Modified event in 1999 — and four fall small-block Syracuse events, and you have a Hall of Fame resume.

“I guess it shows that we work hard at it and we’re consistent,” said Tremont. “Of course, everybody would have liked to have won more races. But overall, I think we made out pretty well.”

Not bad at all for a team that did not have the luxury of major financial backing, like many of the full-time professionals on the circuit. A car owner and driver who held down “real” jobs and never raced for a living. A team that put together most of their engines and built a lot of their own parts. Tremont collected more than 300 of his current 357 career wins in cars maintained and powered by Big Ken. That’s a singular accomplishment that has earned father and son considerable respect in the racing community.

“He is a great mechanic,” said Tremont of his dad, who turns 80 this month. “He has a great work ethic and, obviously, I wouldn’t have gotten half as far as I did without him. We always tried to do all that we could ourselves — we either built it ourselves or we didn’t have it. It wasn’t like there was a bunch of money in the checkbook, and we could just call somebody up and say, ‘We’ll take one of these or two of those.’ To be able to do it the way we did it is definitely more satisfying.”

Especially in the Capital District, Tremont’s popularity is enormous — he’s always been labeled one of those “really nice guys” in this sport.

“It’s that golden rule of treating people like you would like to be treated,” he reflected. “We try not to get caught up in things. It seems like I was so busy working to make us go faster that I didn’t have time for any ‘Peyton Place’ (drama in the pits). If I have that kind of energy, I put it in the race car.”

Ken is proud and grateful to be joining the esteemed Northeast Dirt Modified Hall of Fame, an honor reserved for the best of the best.

“It’s a tough sport,” Tremont bottom-lined. “You are always up against such tough competition and there were always guys doing as good or better than we were. When I was coming up it was Cagle, Bob McCreadie, anybody named Johnson — they all had good credentials.”

For a lot of years, Ken believes he raced against the very best drivers that DIRT had to offer.

“We struggled for some of those years. Some years, we were a lot better than others. I’ve been lucky enough to have people that want to do this with me, both financially and physically. And we’re still having fun at it.”

It’s expected Tremont will come to the induction ceremony with a large crowd. Family is huge with him — his strong sense of loyalty is just one of many attributes that has earned this Hall of Fame driver the admiration of his peers.

“I think we did more with less than the average team did, so we will proudly accept this,” Tremont said of his selection to the Class of 2018. “When I first started, I thought it would be a great thing to just win a Modified feature! But to do what we’ve done has been great. And to be able to do this with my dad and my family makes it even better.”