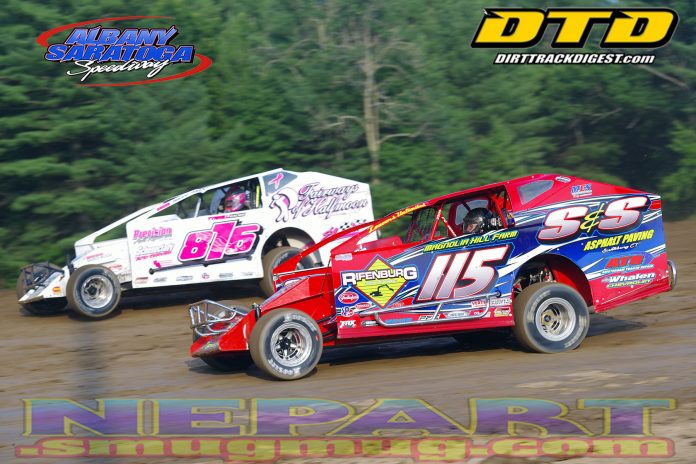 Early Friday evening at Albany-Saratoga Speedway contact was made between drivers Demetrios Drellos and Kenny Tremont during a heat race. The contact given to Tremont by Drellos caused a commotion leading to Tremont having a word with track officials immediately after.

After talking with the officials Tremont decided enough was enough, he loaded up his trailer and went home. Tremont wasn’t alone though. Hector Stratton, who has had issues with the same driver, also loaded up and left the track Friday evening in support of Tremont.

“Drellos is causing a lot of problems running into people,” said Hector. “We’ve had problems with him more than once. Tremont passed him and never touched him. The kid drove right into the left rear of him and spun him around for no need. The track didn’t do anything. Kenny is a good friend of mine so I told Kenny that if he loads up I’ll load up with him and so we did.”

Tremont and Hector’s distaste for the situation was a statement for everyone to hear.


“I like to keep the sport a sport,” he said. “Racing on the track is one thing but that was just stupidity. Something needed to be done and the track didn’t make a call. There’s no room for stuff like that.”

Hector is staying strong to his decision and said that he will only return to Albany if Tremont returns.

“We’ve all been around racing long enough to know there’s going to be controversy on the track between drivers, but this is much deeper than that,” said car owner and son, Hunter Stratton. “This is a kid that is blatantly going out there and targeting someone.”

“This has more to do with principle than taking sides for a friend,” he said. “What Drellos did could have been a lot worse than it was. I was sitting in turn four directly in front of everything and it was one of the dirtiest things I’ve ever seen on the track. Tremont could have easily lost control of his car and taken a turn for the worse.”

Racing can get very expensive in a hurry, especially for many small teams.

“For some teams like ours, if something terrible like that was to happen, our season would be over,” Hunter added. “That’s countless hours and a lot of money put into a race car to have it destroyed by a reckless driver. That’s just unacceptable and I think most all drivers would agree.”

Hunter and the Stratton families displeasure with the incident doesn’t stop just at Drellos.

“I have nothing bad to say about Lyle or the management at Albany Saratoga Speedway,” he added. “I know how hard it is to run events of this magnitude and they’ve done a great job putting a great product out there each week. I just feel like they made a bad decision on this one. If Tremont doesn’t return to Albany-Saratoga Speedway there’s a lot of fans that won’t be returning to the track either. That also means my dad won’t be racing and that sucks for his family and the crew that put in so much work each and every week to see him race.”

The Stratton family believes the displeasure regarding the driver and the track needs to be heard and acted upon, otherwise incidents like this will continue to happen.

UP NEXT –
July 20 – Albany-Saratoga Speedway