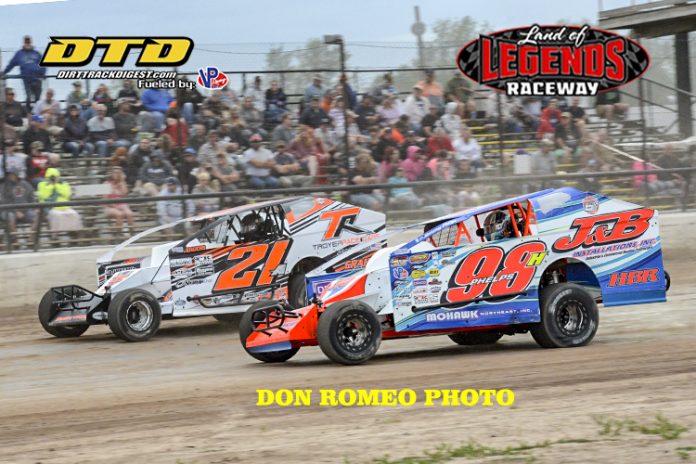 The team opened their three-day weekend Thursday evening at Orange County Fair Speedway in Middletown, NY with the Super DIRTcar Series for the Battle on The Midway.

Jimmy Phelps kicked off the evening with a second-place finish in his heat race, which placed him into the top-12 redraw for the main event.

“Middletown is a tricky place,” he said. “You’re either comfortable there or you’re not and our car was pretty good.”


By luck of the draw, Phelps rolled off on the outside of the second row for the 100-lap main event.

“We got up to second,” added Phelps. “It was pretty evident that we didn’t have a whole lot for the leader. I thought we were keeping the car good and straight. We made it until lap 99 and blew a right rear tire which ended our campaign.”

The no.98h was on rails Thursday at Orange County but unfortunately came just one lap too short. The team was able to get Phelps back out on the track to restart at the tail of the field and close out the evening with a 16th-place finish.

Max McLaughlin finished where he started in his heat race, in fourth, which lined him up on the outside of the eighth row for the 100-lap main event.

“It was really hard to pass,” McLaughlin added. “You had to make your ground on restarts. We were up to ninth and got tangled up with another car and had to come in for repairs. We made it back out and couldn’t really do anything. We got to 15thand didn’t go any further.”

McLaughlin’s 15th-place finish may have cost him a few points for the championship chase, but he still sits second in points behind points leader, Matt Sheppard.

The HBR team then made the trip back to their Friday night home track, Brewerton Speedway.

Phelps started sixth in his heat and climbed his way through to finish second, which lined him up on the outside of the seventh row for the main event.

“We have a real good baseline there,” Phelps noted. “It seems like sometimes you catch the breaks you need and sometimes you don’t. We got behind early. We had a good enough car we could run where no one was. We got ourselves up in the mix then with about five laps to go we caught a few late race yellows which helped us catch the leader. We ran the groove the leaders weren’t which gave us a clear shot. The last corner the car stuck and that was it. It could have gone either way, but it definitely wasn’t our race to lose.”

McLaughlin slipped passed two cars in his heat race to qualify fourth, lining him up on the inside of the eighth row for the main event.

“Jimmy and I were both really good,” he said. “We just made our way through the field together. I got caught up with a couple cars and he was able to get through a little better and made it the front faster.”

McLaughlin capped off a fourth-place finish; his fourth top-five finish of the season at the D-shape demon.

To close out the three-day weekend, the HBR team went to Land of Legends Raceway on Saturday.

Phelps started last in the heat and maneuvered his way into fifth-place to lock him into the handicapping for the feature.

Phelps rolled off on the inside of the eighth row for the main event.

“The track was considerably better than last week,” Phelps noted. “Midway through the feature it cleaned off and we could get racing. We got to the front and just ran out of time. We were good enough if a yellow came out, we would have had a shot, but it went green to checkered. By the time we broke free and got ourselves in the top five the top three were pretty well checked out.”

McLaughlin qualified fourth in his heat race from his sixth-place starting spot.

McLaughlin rolled off on the outside of the sixth row for the main event.

McLaughlin rounded out the weekend with a strong third-place finish.