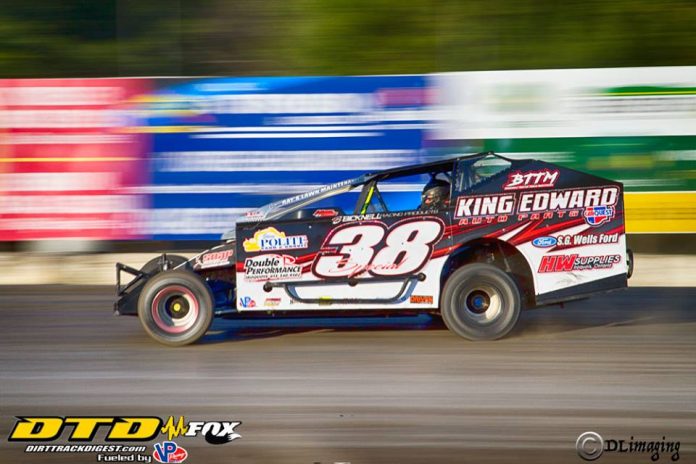 Across the nation, weekly short track racers are searching for the dream season. The type of schedule where everything seems to fall nicely into place. As rare as the accomplishment might seem, its exactly the way things fell into place for Luke Whitteker’s DIRTcar 358 Modified campaign last year at Brockville Ontario Speedway. By the time the checkered flag waved, the 24-year-old chauffeur from Iroquois, Ontario had his name on nearly every major event on the track’s calendar.

A pair of Saturday night feature race wins was good for starters, but fans really took notice of the team’s performance during the extra distance shows. The #38 Special ride scored wins in 3 Ogilvie’s Auto & Fleet Quad Cup dates, the inaugural Tri-Track Challenge and became the first home track runner to score a 358 Mod victory in Brockville’s Northeast Fall Nationals, which was also DIRTcar Series show. The talented youngster logged 10 top 5 finishes in 14 starts and raced his way to the 2017 track championship.

“We jelled really well as a team,” Luke Whitteker said. “We were committed to make the car the best it could be every week and that effort showed on our overall results. The crew was at the shop every day to make sure that we were prepared whenever we rolled off the trailer.”

From a dream season on the track, Luke Whitteker had his world turned upside-down on January 26th of 2018 during a skiing trip at Camp Fortune in Quebec. The accident resulted in 5 broken vertebrae, a broken shoulder socket, shoulder blade, collarbone, 9 broken ribs and a punctured lung. He’d never been injured in a race car, but as he was lying in a hospital bed, the driver wondered if he’d ever race again.


“Things turned into a nightmare very quickly, but I tried to remain as positive as possible,” Whitteker said. “Family and friends helped keep me motivated and Ralph Murphy – my car owner – assured me that the car would be ready for me whenever I was ready to return. All very important factors in my recovery.”

In his first start of 2018, Whitteker picked-up a thrilling last-lap win at Brockville for his 4th straight Ogilvie’s Series checkered flag. He also made it to the winner’s circle August 18th and September 1st at The BOS, for a 4th place point finish. There was a Canadian Nationals Series triumph August 5th at Cornwall thrown into the mix. Whitteker says he’s looking forward to his chance of taking a repeat win at the Northeast Fall Nationals – October 12th and 13th – at Brockville Ontario Speedway.

“The team always gives me a strong piece and to have Loud & Dirty Brand – one of our backers – as the title sponsor this year gives us some extra incentive,” Luke Whitteker said. “There’s a lot on the line, but after winning on the opening night I can’t think of a better way for our team to wrap-up the year.”