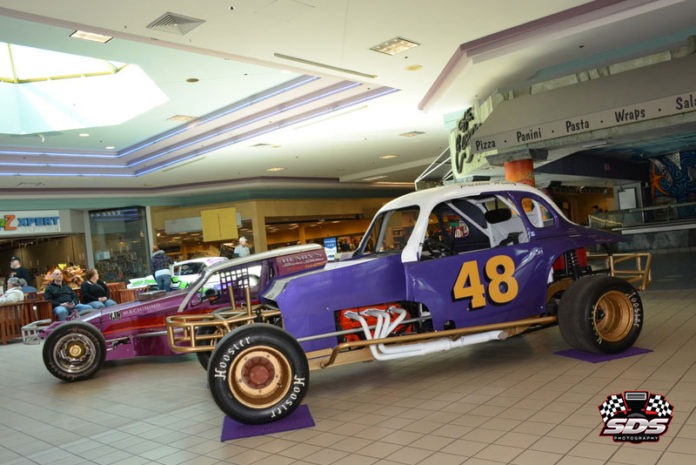 PHILLIPSBURG, NJ – The dates for the popular twelfth edition of the week long Quaker Steak & Lube Dirt Track Heroes Show have been confirmed for 2019 and the hard-working staff and the many historical groups and speedways are beginning to place all of the necessary pieces on paper to insure the racing community of another great show. The successful event will once again begin its week long run at the Phillipsburg Mall located off Route 22 East in Phillipsburg, New Jersey beginning on Sunday, March 3rd and will run through March 9th in 2019.

The upcoming show encompasses the majority of the local short track scene and has become a must go to event for the local Tri-State area. Quaker Steak & Lube will once again sponsor the Twelfth Annual Quaker Steak & Lube Dirt Track Heroes event to be held at the Phillipsburg Mall from March 3rd through the 9th in 2019. Quaker Steak & Lube, or The Lube(r) to loyalists, is the award-winning casual dining concept known for their Best Wings USA and over 25 signature sauces, is fully prepped and geared as the lead sponsor for the trend setting 12th Annual Dirt Track Heroes Car Show to take place at the Phillipsburg, New Jersey Mall, located on Route 22 East. The Pohatcong Township (Phillipsburg, NJ) Quaker Steak & Lube is located at 1304 US Route 22, Phillipsburg, NJ, and welcomes all race fans and families to stop by their location when visiting the New Jersey area to be re-charged and re-fueled with some of the best food in the local area.

For the 12th consecutive year, IRCO Community Federal Credit Union will be a strong supporting sponsor of the Dirt Track Heroes Race Car Show. “IRCO Credit Union is pleased to continue its very successful relationship with the Dirt Track Heroes Show,” stated IRCO Vice President Greg Collins. “The show has proven to be a very effective means of establishing the IRCO brand and promoting our various financial products in both the local and racing community. We look forward to another outstanding show at the Phillipsburg Mall in March.”

IRCO Credit Union serves over 8,000 members offering a wide variety of financial products and services and serves the towns of Phillipsburg & Alpha as well as the townships of Franklin, Greenwich, Harmony, Lopatcong and Pohatcong in NJ and the counties of Northampton and Lehigh in PA. IRCO membership is open to individuals who live, work, shop, attend school, worship, or volunteer in any of these communities. As a community-based financial institution, all loan decisions are promptly made in their local offices by onsite lending personnel. Information about IRCO’s various financial services and products is available at www.ircocu.com, by telephone toll free at 800-538-1572 or stop by their offices located at 450 Hillcrest Blvd in Phillipsburg NJ and 2240 Northampton St in Easton PA.

Collins, who is the noted historian of the Harmony Speedway further added, “We are overjoyed to once again play an integral part in the Dirt Track Heroes Show. For me, since day one of the very first show, it is living the dream as the cars and the stars who come out for the show are and remain my heroes and we are proud to be associated with this great show. It is hard to believe this is the twelfth year of the show as the years have gone by so quickly. We are looking forward to another great show and rekindling the great memories of the golden era of the sport.”

The 12th Annual Quaker Steak & Lube Dirt Track Heroes Car Show has a busy seven days planned with opening day set for Sunday, March 3rd. Race cars from a multitude of series and divisions and show cars from street rods to drag cars will be on display with a full week of nightly special events and interviews. The 2018 edition of the show produced more than 300 driver and owner interviews throughout the week. In 2018, there were 141 entries for the event. The popular round table discussions return and expanded as many of the legendary drivers reunite to share special and unique stories that took place at the speedways on and off the track. With this being the twelfth year of the show’s existence, the management and staff of the event are reaching out to all avenues of racing to become involved with the show.

Taking over the reigns of the show under the auspices of Bob and Donna Miller, will be Justin Beltrame. Beltrame is a natural fit to take over coordinating the show events from Ed and Steve Pados, who have been assisting him in preparing for the event. Beltrame has been part of the show since it’s inception and has a vast knowledge of racing in the local area and to a greater capacity the history of the racing action that took place at the now defunct Lake Mocatek Speedway. Beltrame is coordinating with the Millers and the Pados Brothers as to what portions of the show need to be tweaked and the continuance and acknowledgement of the past, present and future of racing and the show. “I’m excited to have Justin join the team of the Dirt Track Heroes event and looking forward to his key contributions to making this show even better than before ”, said Bob Miller.

The Phillipsburg Mall has proven to be a popular setting for this special event and will once again offer many varieties of new and vintage race cars, racing memorabilia, collectibles and photos on display throughout the Mall for the duration of the show’s run. The eleven previous shows have brought out race cars from all divisions of motor-sports filling the Mall space as the past, present and future of racing have been highlighted in a week long show celebrating the love each of us has found in attending races and meeting so many wonderful people associated with the sport. With an exciting and diverse schedule of events to whet the appetite of any true race fan, large crowds are expected to flock to the show to fill the wide walkways of the Phillipsburg Mall for the upcoming twelfth edition of the show.

The Dirt Track Heroes Car Show will again offer a great tribute keepsake event souvenir program book and shirt. The Phillipsburg Mall is open Sunday 11 AM to 6 PM; Monday through Saturday from 10 AM to 9 PM. For Quaker Steak & Lube Dirt Track Heroes information, contact show organizers Bob and Donna Miller by phone at: 443- 513-4456, via e-mail at: TOTHILL98@aol.com or at their website: www.thunderonthehillracingseries.com. or contact Justin Beltrame at: 484-772-7184 or through email at: justin.beltrame@gmail.com or Steve Pados at: 484-784-7756 or through email at: steveswp@ptd.net