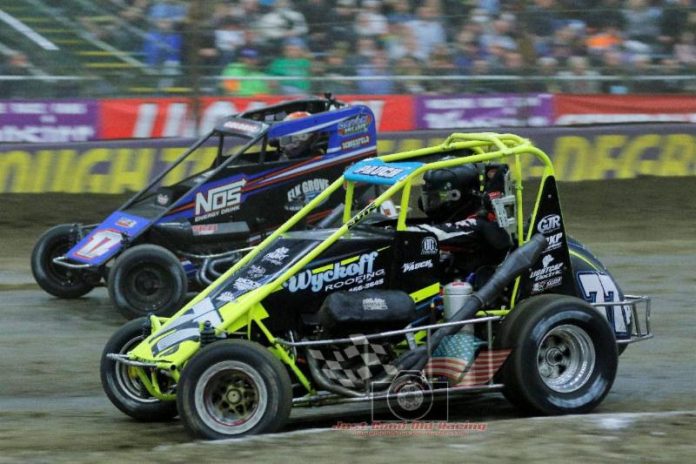 ‘The Kid’s Kid’ out of Frenchtown, NJ, Billy Pauch Jr. and the ‘Phenom’ out of Collegeville, PA, Alex Bright have teamed up once again. This time the duo will be competing at the VP Racing Fuels Gateway Dirt Nationals at The Dome at America’s Center in downtown St. Louis, M.O.

“After a successful Chili Bowl where we ended up in the A-main and B-main as teammates, we decided to embark in the trip to St. Louis with the midgets,” Pauch Jr. said.

Pauch Jr. and Bright are excited to head out to the prestigious event that has grown tremendously in the past three years.

“It’s a neat event to be a part of, especially for me and Alex being from the east coast and not being one of the mid-west drivers,” he added. “It’s an event a lot of people have been talking about and something I just wanted to go out and see, so it’s something else to be able to take a car out to and compete in.”

Both Pauch Jr. and Bright will be behind the wheels of the same Degre Engineering, Bob Hilbert Sportswear, Presidential Heating & Cooling, Elite Chassis machines they competed in at the Chili Bowl at the beginning of the year.

“It’s pretty cool every time we team up together,” Pauch Jr. said. “Alex has a great bunch of guys that make our lives that much easier every time we are on the track. I’m always confident when we run together.”

The Gateway Dirt Nationals has quickly become known for its action-packed racing and the high level of excitement that all takes place Nov.29 – Dec.1 on the fifth-mile dirt track erected inside the dome.

Be sure to keep your eyes out for the dynamic duo as they make their trek west to compete against some of the best in the business.