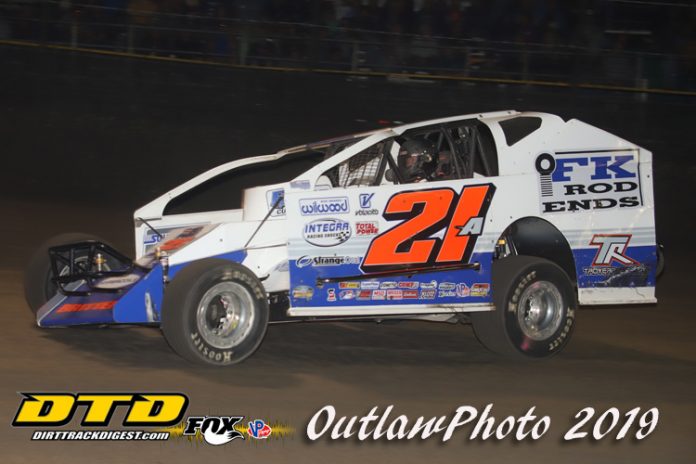 WEEDSPORT, NY – A few months back, it was announced that Peter Britten would invade the Albany-Saratoga Speedway as a regular on Friday nights during this coming season. Well, Britten has decided to keep his program in New York’s Capital Region in 2019 as he will call Lebanon Valley Speedway home on Saturday nights as well.

Britten, the 2017 Modified Champion at the Malta, NY oval, did make two starts at the Valley of Speed in 2018 but has never been a regular at the Speedway. That will all change this year as he takes his self-owned #21a to the High Banks.

“I’m really looking forward to trying my hand at Lebanon Valley,” Britten said. “Their weekly purse is decent and $10,000 to win the points championship is really attractive too. Lyle (Devore, track general manager) was telling me that even 10th place gets like $4,000 and that’s a big incentive for running the Valley. I’m excited to see how we can do down there.”

Making the trip down to the eastern part of New York every weekend makes sense to Britten, who can now concentrate on two championship runs at tracks within 30 minutes of each other.

“This will be good for our program because we will already be down there to race at Albany,” he said. “I’m also hoping that running a track in the Albany market will help us attract some sort of sponsorship. The Valley has been a premier track for years and the fan base is very strong. Hopefully we can do well there and maybe find some additional help for our team.”

With defending track champion Brett Hearn’s move to Orange County Fair this season, the addition of Britten to the Valley’s weekly roster adds another A-List driver to the already crowded field looking to win the 2019 title.

“The Valley has a really strong crop of drivers and teams and we want to be in the mix,” Britten said. You’ve got Flach, RJ, Tremont, Marshall, Bachetti and a host of others who are all capable of getting to victory lane each week and winning the track title. I think we can contend for the championship, but I know it’s not going to be easy.”

Britten also likes the fact that both Albany-Saratoga and Lebanon Valley work with DIRTcar to help those who follow the Super DIRTcar Series.

“Running both tracks works well with the Super DIRTcar Series schedule,” he said. “Each of them offers show-up points on nights that conflict with the tour. It’s nice to have that option so I can run for the Series title while still chasing both track championships.”

While this will be Britten’s first season as a Valley regular, he’s looking long term at the possibility of making the West Lebanon, NY track his home for years to come.

“There’s a reason why guys run there,” he said. “That area attracts a lot of sponsorship and hopefully we can run well enough to do that as well. I think it’s worth taking a crack at it and see if we can’t come away a great 2019 season.

Stay tuned to PeterBrittenRacing.com for news about Peter’s season as it develops.