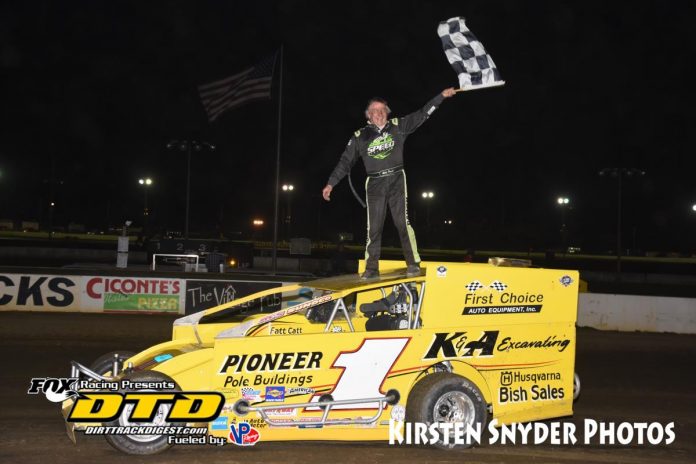 With a new rule package at Bridgeport Speedway, drivers had the option to bring a Small-Block Modified or a Big-Block Modified. The Pauch Racing stable brought both ponies to the show resulting in a win and a sixth-place finish for the father and son duo.

Pauch Sr opened the evening with a heat race win after slicing his way through the field from his seventh-place starting spot, placing him into the top-12 redraw.

Pauch Jr’s evening started off a little rocky for the Kid Racing team. “The driveshaft broke during hot laps,” he said. “We rebounded though. It was either drink beers or go racing at that point, so we decided to go racing and fix the drive line. We were able to fix it and make it out just in time for the heat.”

Pauch Jr went on to finish fourth in his heat, placing the Kid Racing No.15 into the top-12 redraw.

“It’s all about getting the right combination,” Pauch Sr. said. “I looked at the weather and knew the track was going to be dried out.”

Pauch worked his way through the field and made the pass for the lead on lap 11 as he blew passed Davey Sammons on the outside of turns one and two.

“I figured I could get him there and once I got him move back down to save the tires,” stated Pauch Sr. “There was a top there, but I was just worried someone was coming. I kept looking at the lap board to see who was there.”

With the rare appearance of sail panels on the side of the No.1, led to Pauch’s car being very tight. Despite a tight race car Pauch was able to steer his Small-Block Modified to victory lane with a five-second lead over second-place to pick up his first victory of the season.

“It’s big when you win early,” he said. “Hopefully we can keep this momentum going.”

After a few adjustments between the heat and feature, Pauch Jr was able to rebound and collect a top-ten finish.

“Things didn’t go my way,” added Pauch Jr. “We fell back a ways on the start. I think if we started up front, we would have been a top three car. We were rolling pretty good there at the end and crossed the line in sixth. The car has a lot of potential. It’s always cool when a new car comes out and we have something to show.”