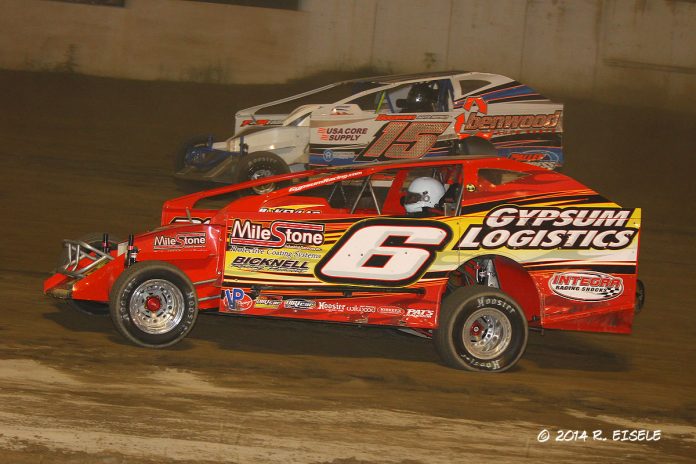 Although Pat O’Brien Sr. was a long-time driver and winner at the old Watertown and Kingston speedways, among others, it was never really a given that his son and namesake would follow him into the seat of a dirt Modified.

“By the time I was nine or 10 years old, dad was pretty much out of racing,” Pat related. Senior had hung up his helmet to focus on raising a family and building a business, Pat’s Radiator Shop.

“To be honest, I was really too young to actually recall my dad in competition. But I would still go to the races, usually sitting in the stands with family, and eventually, as I got older, I would go with friends,” O’Brien said.

Kingston Speedway closed in 1976 when Pat was 12, so in later years he and his buddies would frequent Brockville, Can-Am and Cornwall speedways. In 1985, at the age of 20, he decided it was time to try his hand at piloting a Modified.

Donnie Carlyle, brother of Hall of Fame driver Doug “The Ox” Carlyle, was his mentor, showing him the way to win. “He helped me build my first car and went with me to all the races,” O’Brien stated. “It was Donnie’s philosophy that the only way you got good was through seat time — so for those first couple of years, we raced four nights a week.

“Me and the guys were probably about as close to being full-time as you can be, without actually being full-time,” Pat admitted. “We would race at night, get home in the wee hours of the morning, shower, get some sleep and go to work, and repeat that cycle all week long, week in and week out, during that first season.”

It took Pat more than two years to garner that first win. It came on May 2, 1987, the season opener at Can-Am.

“That was an unbelievable thrill,” Pat proclaimed. His first career win wasn’t his last that year: O’Brien went on to score four more victories before season’s end, a second win at Can-Am, two at Brockville and one at Cornwall.

O’Brien’s success on the North Country tracks caught the eye of Hall of Fame car owner Sheldon Legue. And after Legue and driver Doug Carlyle decided to part ways for 1988, Pat got the call.

“I got to know Sheldon from following the [358 DIRT] series,” Pat recounted. “We would often be parked close to one another in the pits.”

The Legue ride was a sought-after seat, but the car owner liked what he saw in O’Brien.

“I liked his personality. He was good with people, presented himself well and was showing some promise as a driver in being able to find victory lane,” Sheldon said at the time. “He was a clean driver and usually brought the car home in one piece.”

Upon Carlyle’s departure, O’Brien called Legue, asking to be considered for the ride. When the two met, “I could see the hunger in his eyes,” Sheldon remembered then.

And, prophetically, 1988 was a magical year for the new team. By the end of the season, O’Brien and Legue had clicked for 16 wins, track championships at Cornwall and Can-Am, and the all-important Mr. DIRT 358 tour title, racing against high-profile heavyweights like Brett Hearn and Bob McCreadie.

Between 1988 and 1993, the Legue-O’Brien pairing won a total of 66 feature events, eight track championships and a benchmark three Mr. DIRT 358 series titles.

In 1994, Legue cut back his racing involvement to spend more time with his family, and O’Brien returned to being an owner/driver. Pat also started a family with wife Christina, and daughters Shannon and Sarah came along in 1996 and 1998.

“I was fortunate in that, even with a young family, the race car pretty much supported itself,” Pat said. But in 2000 — even with 10 wins and a track championship at Can-Am — O’Brien found himself struggling financially to keep the operation going. “So I elected to do what my father did, and that was to step away and sell everything,” he conceded.

In the fall of 2000, en route to bringing his race motor to builder Pat Morrison for sale, O’Brien made a fateful visit to John Wight, who had just purchased Can-Am Speedway.

“He saw the engine in the back of my truck and wanted to know if I was taking it to get freshened. When I told him I was going to sell it, John couldn’t believe it. Here, he had just purchased Can-Am — and his track champion was getting out!” Pat detailed.

O’Brien sat out 2001 and 2002, but still went to the races to help out his brother Danny. And John Wight and Pat kept in touch.

“In 2003, with John’s help, I was able to return to racing,” Pat acknowledged. Competing primarily at Can-Am in 2003 and ’04, O’Brien settled right back into his winning groove, taking down two big-block victories in the Gypsum team #6, along with the 2004 Can-Am track championship.

In 2005, Pat was as prolific as he’d been in the late ’80s and early ’90s, scoring a dozen wins in both big- and small-block Mods at Can-Am, Brockville and Cornwall, and claiming track titles at Can-Am and Brockville. It was his 10th championship at Can-Am, where he is the winningest driver in the track’s history.

Quietly retiring at the end of 2016, Pat O’Brien amassed more than 185 wins at seven speedways in two countries, four Mr. DIRT 358 series titles and 22 track championships in a sterling career that spanned 31 years.

But more importantly, O’Brien earned the respect and admiration of his racing rivals.

Hall of Fame driver Marcel Lafrance and his son, Edelweiss and Cornwall champ Stephane, both chased Pat O’Brien at various points in their racing careers.

“In the late ’80s, it was between Pat and my dad a lot. In the early 2000s, it was Pat, his brother Danny and me,” said Stephane, who used to pit beside Pat at Brockville. “I won a lot myself, but Pat was THE GUY! Even at the end of a race you were winning by a mile, if you backed down at all, he’d take you.

“Pat was everything you would want in a race car driver,” the younger Lafrance summarized. “He put on a good show for the fans. He was never dirty. And he never made mistakes.”