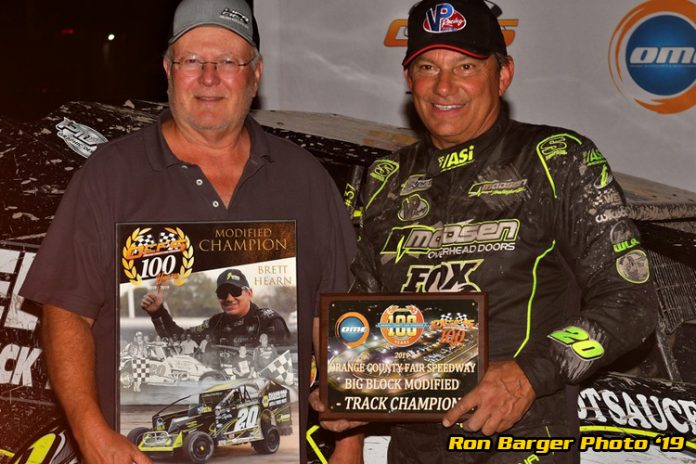 On Thursday, July 23, DIRTcar’s all-time winningest Mod driver, Brett Hearn of Kinnelon, NJ, will be inducted by the Northeast Dirt Modified Hall of Fame, joining an exclusive company of talented racers. The 29th annual induction ceremonies will be held in the Hall of Fame Museum located on the grounds of Weedsport Speedway in New York.

Now 61, Hearn is considered the greatest dirt Modified driver in the history of stock car racing — so the honor is no surprise.

“It really hasn’t sunk in yet but the numbers warranted this for a while,” said Hearn from his new office at Orange County Fair Speedway, where he assumed the role of general manager late last year. “Even though I’m finding myself looking back lately and sharing stories, I am more about looking forward.”

Hearn’s incredible stats, and the stories surrounding his success, will be hard — if not impossible — to top by any upcoming superstar.


His body of work: A mind-boggling 919 career wins at 48 different tracks in 11 states and two Canadian provinces; 97 track and series championships, including eight overall Mr. DIRT Modified titles; 10 Super DIRTcar Series titles; and crowns in every other title series DIRTcar ever designed. Hearn is a six-time Super DIRT Week winner in both the big-blocks and small blocks (a dozen overall) and a 12-time winner of Orange County’s crown jewel Eastern States 200, topping the companion ES 358 Mod event 17 times. He is Orange County’s all-time feature winner with 308 victories in four divisions, and the winningest driver at Albany-Saratoga Speedway with 136 wins. Hearn was named Driver of the Year in 1986 by the Eastern Motorsports Press Association, and was number one on Area Auto Racing News’ 2013 list of the 50 Greatest Drivers of the Past 50 Years.

Always driven and determined, Brett Hearn’s laser-focus on the ultimate prize enabled his rapid rise over the past four-plus decades. As a boy, he tried other sports and also tried to focus on his studies — but the idea of racing engulfed his thoughts.

“We had a club on our block and would race bicycles,” recalled Hearn of the Jersey neighborhood gang. “I think I groomed myself from the age of 11 to race — go karts, dirt bikes. I was always racing something.”

His dad Gordon did some racing at OCFS in the early ’70s, and became acquainted with car owner Tony Ferraiuolo. On the occasional visit to Ferraiuolo’s race shop in nearby Whippany, Brett was eager to tag along with his father.

“I hung out enough to know what I wanted to be like — I don’t think there was much more that impressed me at that time than seeing how a real race shop operated,” Hearn said of the Ferraiuolo outfit. “It certainly influenced me.”

Gordon put Brett in a Sportsman car at Orange County in 1975 at the age of 16. With guidance from chassis wizard Eric Koster, and help from speed shop owner Pete Van Iderstine, Hearn invaded victory lane during his sophomore season, winning 12 times at OCFS and Nazareth Speedway. In 1977, it was 20 wins and championships at both ovals.

“He had that Van Iderstine car that Whip Mulligan had built and we got a chance to set the chassis up and take him to the race track to see his ability,” Ferraiuolo’s superstar driver Gary Balough recalled. “There was so much talent there! And he just got better and better.”

Hearn gives a lot of the credit for his early success to Pete Van Iderstine. “I was working in his speed shop and my dad and I started beating on Pete to give me a chance in his car,” said Hearn. “Pete had a good car — I mean a really good car.”

Van Iderstine also had stout power: Hearn showed up for his third season with a Tony Feil engine under the hood that belonged to Van Iderstine.

“The engine we had in our first car was built in our family room at home, from junkyard parts that we had gathered up,” Hearn related. “So for us to be able to run a professionally built engine was huge! It was really much better than what most guys had at that time.”

After three years in the Sportsman ranks, Brett believed he was ready to move up to the big-league Modifieds. His father agreed. “So here I think, OK, I’ve got him on the hook and we’re going to go big-block racing,” Hearn ruefully remembered, “but he looked at me and said, ‘Good luck.’”

“I was mad — I thought, I’ll show him,” said Hearn. “A few days later my dad came to me and said, ‘I will be there to help you but I won’t do it for you.’ That was smart: he set me up to be self-sufficient.”

The family-owned car was sold for $6,000; Gordon split the sale price with his son.

“I took my $3,000 and what I saved from working at the speed shop and I started making deals,” said Hearn. “Pete worked out an engine deal with me and we won (OCFS) the third week out in the big-block. I went home with that $1,000 (night’s payout) and thought I was a millionaire.”

With his GQ good looks, his professional presentation and his ability to speak articulately about himself and the sport, Hearn was able to effectively elevate everyone’s idea of a local stock-car racer. As comfortable in a corporate conference room as he was in the cockpit, Brett brought sponsor procurement and representation to a whole new level. By the early ’80s, he was the Jeff Gordon to everyone else’s Dale Earnhardt.

And that didn’t really sit well with the old-school diehards.

But he had the talent — they grudgingly gave him that — and players like Hall of Fame driver Budd Olsen took notice. Hearn was working at Olsen’s South Jersey speed shop — until Budd reckoned Brett would do the business more good racing out on the road than mooning around the shop.

Budd and Doug Olsen provided the cars and parts; Hearn provided the engines. And they sent him out on tour to compete with the Super DIRT Series.

“That was what got me to the point where I could run professionally; it was with their support,” a grateful Hearn said of the Olsens. “And it just kept getting better and better as the years clicked off.”

His first major road victory came in 1981 at Lebanon Valley Speedway, a 100-lapper in July. He followed that up by winning the LV 200 in September, and his second Eastern States 200 at his home track the next month. Hearn was 23 years old.

Out on tour, competing against the circuit’s toughest scrappers, Hearn and team drew attention with their spit-polished image, impressive early career stats, top-notch equipment — and that mistaken attitude.

“Being from New Jersey, I always felt a little bit of an outsider,” Hearn said of the NY-based series. “We just did our own thing and tried to be the best we could. Nobody could believe we weren’t cheating. We were making a lot of ground-breaking changes so we focused on that.”

Hearn has run corporate colors for Pepsi, Auto Palace, Budweiser and others over the years, and driven for some top car owners: Bob Hummer, Guy and Brian Madsen, John Majka, Pete Chesson, Vinny Salerno, Jody Gable, Hastings & Knoth, Glenn Hyneman — and, of course, there was his 1989-91 stint with Ray Bramall’s Freightliner Trucks of Newburgh team.

“Those were probably my most productive years but my three most agonizing,” Hearn admitted. “We won everything in sight, yet I didn’t feel good about it. The team jelled and the equipment was top-notch and always on the money. But there were so many other things that made me want to go back and run my own deal.”

In an earlier departure from NE Modifieds, Hearn took a stab at NASCAR’s Busch Series in 1985 and ’86. With help from the Olsens and others, he managed a best run of 10th at Dover International Speedway. But like many other talents before him, he found NASCAR a bottomless money pit. And when you’re hot on the dirt short tracks. . . Well, it doesn’t make economic sense to pursue it.

“When he went down to North Carolina to race there was no doubt in my mind that he had the credibility, the personality, the looks and the talent to become a Cup star,” said Gary Balough, who also took a swing at the big time, and conferred with Hearn about the opportunity at the time.

But it wasn’t in the cards. “I would have liked to have stayed in NASCAR but it’s not a regret in my career,” reflected Hearn, who says the knowledge and work ethic he gained propelled him to even greater success in the Mods. “That experience allowed me to come back and build cars with the Freightliner team that were really light years ahead of everybody else.”

On familiar turf, and calling his own shots, Hearn changed it up in 1996, leaving his long-time home track of Orange County for an off-and-on stint at Lebanon Valley, before returning to OCFS in 2019.

“We raced at the Valley for 16 full seasons and won 13 championships,” said Hearn. “That was fun for us, but it was also nice to return to Middletown for the end stage of my career.”

Dickie Larkin, one of the Valley’s winningest drivers, is happy Hearn wasn’t a career regular.

“We weren’t friends because Brett didn’t really make friends with people — he was all business,” said Larkin, who was LV’s Modified champion in 1990 and 1994.

“I’m just so thankful he spent his first 15 to 20 years at Middletown, not Lebanon Valley, because all of our records and trophy cases would look a little different. We didn’t even have him in the prime of his career and look what he did at LV! By the time we got him, he was in his 40s and 50s.

“He just set a whole different standard for Lebanon Valley,” Larkin concluded. “I sure respect what he’s accomplished. . . Brett Hearn was one of the best there ever was, if not the best.”

Hearn’s upcoming Hall of Fame induction will not find him hanging up his helmet. He plans to drive select shows for the Madsen team this season while also focusing on his new role as Orange County’s Director of Motorsports.

“I’m really excited about the next chapter,” said Hearn, who has promoted the successful “Big Show” annually at Albany-Saratoga Speedway. He’s nervous yet excited about steering the ship for Chris Larsen at OCFS. “If I was getting ready for a big race, I would wake up in the middle of the night with my mind racing, get up and make notes so I didn’t forget anything by morning. I’m finding myself doing that again about the track, so I know I’m in a good place.”

Hearn looks forward to celebrating his career milestone Hall of Fame honors with family and friends in July.

“My career has been such a family thing — my brother [Bobby] is a well-known chassis builder, my nephew [Matt] is a crew chief, my sister [Bonnie] and my parents [Gordon and Kay] have gone to the races my entire career,” said Hearn. “How lucky am I that 40 years later they are still chasing me around in a motorhome?”