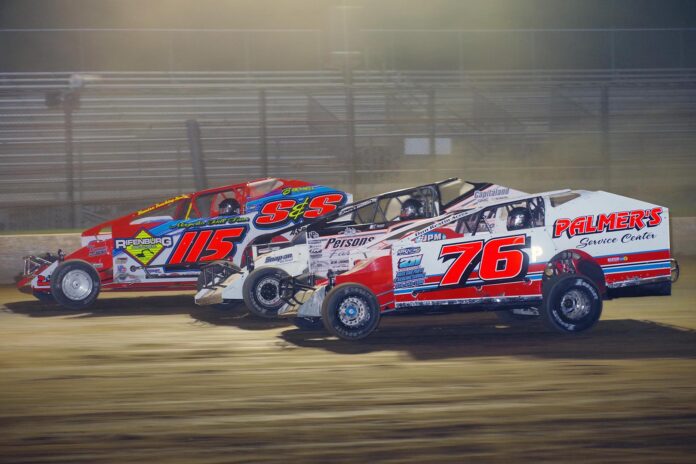 Sowle, who has garnered 12 career Modified wins (Albany-Saratoga-2; Fonda-1; Glen Ridge Motorsports Park-9) had limited support from the Palmers in 2019 and 2020. Running his self-funded car in 2020 had been difficult for Sowle as he had been involved in several wrecks in his #711 Sportsman car.

“I had a particularly bad night at Fonda in 2019 at the end of the year, losing the driveshaft and yoke during a heat race and I didn’t have any spare parts. That car was fast but I kept wrecking. Alton and Carole stepped up that night loaning me the parts I needed and, from that point on, they have been like family to me.”

When the decision had been reached between last year’s driver, Jeff Hoetzler, and the Palmers to go their separate ways, it was an easy choice for Alton and Carole to ask Sowle if he would like to be the full-time driver of the #76. In 2020 Sowle had several starts in the Palmer small block at Albany-Saratoga, exhibiting some strong runs against the Big Block competition.

The Palmers, who will be entering their 44th year of ownership and sponsorship of cars at Fonda, are looking forward to the season with Sowle as their driver and their continued commitment to the speedway. They believe their new driver has the potential to do well and to win at the famed “Track of Champions.”

“Fonda has always been our home track,” stated Carole. “…it’s our place to be on a Saturday night.” She went on to say, “…Alton is Fonda and Fonda is Alton. That’s just the way it is.”

That devotion to Fonda began nearly 44 years ago for the Palmers when Alton took Carole on their first date to the races at the speedway. At the opening event of Fonda Speedway on April 17, 2021, the couple will celebrate their 45th wedding anniversary and celebrate the same way they began—at the races—and with their new driver at the wheel of the well-known Palmers Service Center #76.

“JaMike is a very likable guy. We have watched him for many years wheeling a race car and are excited about his potential to do well in our car,” stated Alton. “We’re open to running at some other race tracks when we can but our business keeps us very busy and traveling is tough for the entire team.”

For the 2012 season, the Palmers Service Center team will field a new Teo (Big Block) and a new DKM (Small Block), each powered by a JPM power plant. In addition, there will be a 358 DIRT legal car #76 available. Sowle will keep the Sportsman car he fielded last season for running some specials in that class.

“My goal is to do my best, to get some wins, and to step up our entire program. I’m really thankful for the support from Alton and Carole and their belief in me” stated Sowle. “We’re excited about 2021 and our potential as a team.”