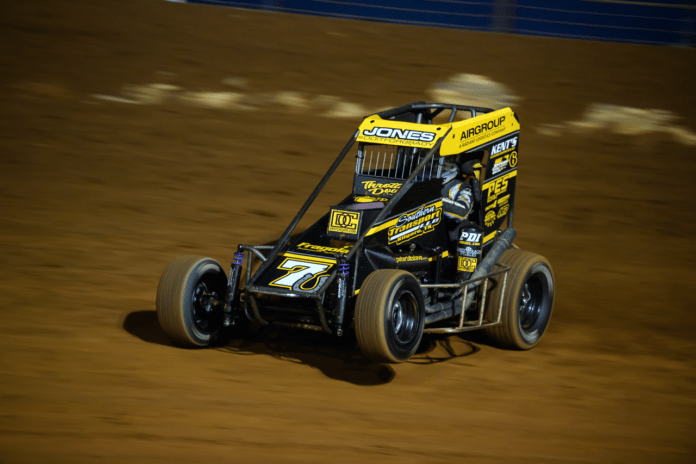 CONCORD, NC – Jan. 23, 2023 – After a career-best run at the 2023 Chili Bowl Nationals, Kyle Jones and the No. 7U Trifecta Motorsports team are committed to chasing the 2023 Xtreme Outlaw Midget Series presented by Toyota championship.

Jones and car owner Steve Carbone are currently in their fifth year of partnership, and already have some goals set for the 35-race slate.

“We really want to win a race,” Jones said. “We’ve been really close to winning a national Midget race, and that’s our ultimate goal for sure.

“Once you get over the hill and win the first one, I think they start coming a little bit easier. Of course, none of them are way easy. But we’ve just gotta get over that mountain, and once we do that, I feel like it’ll be a little easier for us.”

Though they did not reach Xtreme Outlaw Victory Lane last season, they came close on more than one occasion – a third-place run after starting on the pole at Davenport Speedway last August, and a fourth-place finish at Port City Raceway in October. Those two top fives and six top 10s collected throughout the season added up to a fourth-place finish in the final points standings.

Together, Jones and Trifecta are reaching new heights every season. For a team that used to compete only at the Chili Bowl, their evolution has been a long and winding road.

Jones was first introduced to the Tulsa, OK-based team when fellow Texan and former NASCAR driver David Starr mentioned Jones’ name to Trifecta management and told them to give Jones a call. Jones got that call during the 2018 season and won the first outdoor race they entered together before competing in their first Chili Bowl the following January.

“It’s so awesome to see how much it’s grown over the years,” Jones said. “It went from one race a year, to five races a year, to doing 15… now we’re running a national tour. It’s just really cool to be a part of it.”

With Jones’ Texas residency and the team’s home base in Oklahoma, travel can sometimes have a big presence on the team expense report. However, the great partners for the 2023 Xtreme Outlaw Midget Series presented by Toyota season have paved the way for a hefty contingency program and a healthy nightly purse that will keep current teams on the road and attract newcomers to join.

“For some of the races, like the ones out in PA, it makes it a little tough on us,” Jones said. “But the fact that the Xtreme Outlaw Series gives you incentives to get out there and do that, like the tow money and helping with pit passes and stuff like that, it helps a ton. We don’t have to worry about that.”

They’ve already had a strong start to the 2023 season with a solid run at Chili Bowl. A smooth and steady line around the bottom of the Tulsa Expo Raceway in his Tuesday night prelim A-Main drove the 29-year-old Texan from 14th on the starting grid to P2 for several laps at his peak, before ultimately settling for fourth by the checkered flag. That prelim night momentum carried over to Saturday, where, after transferring into the big show from a B-Main, Jones again came from deep on a 16th-to-sixth tear through the A-Main, marking his best career finish in the event.

Taking the momentum that he built-up in Tulsa, Jones is arguably the most confident and comfortable he’s ever been in the car. It’s the jumpstart he and the team needed before the Xtreme Outlaw season opener at the Southern Illinois Center in DuQuoin, IL, Friday-Saturday, March 10-11.

“Your whole year – people think the season starts in March or February or whenever – it starts right here for me,” Jones said. “If you come in here and have a really good run, that’s momentum throughout the whole year.”

Catch Jones and the Trifecta No. 7U on track at every Xtreme Outlaw Midget Series presented by Toyota in 2023 – for tickets and the full schedule, visit XtremeOutlawSeries.com. If you can’t be at your nearest event, stream every lap live on DIRTVision.