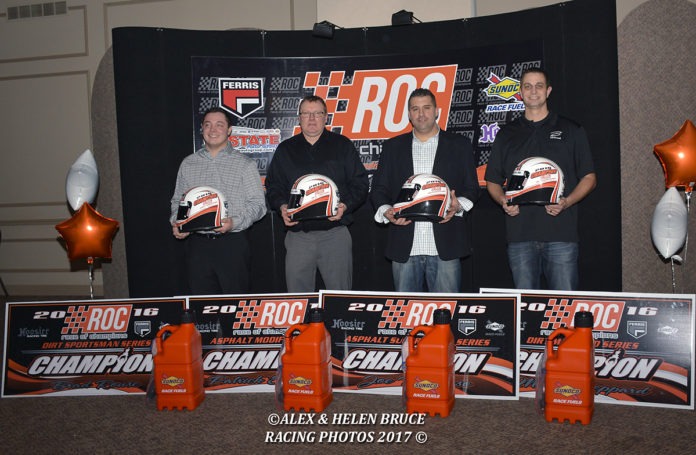 MOUNT MORRIS, NY – The Race of Champions Series gathered at the Genesee River Restaurant & Reception Center in Mount Morris, New York, this past Saturday evening to honor Series champions and present several other special awards as well as bring the 2016 season to a close.
Patrick Emerling of Orchard Park, N.Y., scored the Asphalt Modified Series crown with seven race victories and amazing consistency throughout the entire season in which he was a contender at every event.
“We had a great year,” smiled Emerling, while being interviewed after receiving his championship awards. “This team just did an excellent job, Jan Leaty our crew chief and all of the guys. It was just a great effort and we are very thankful to be here.”
Waterloo, N.Y.’s Matt Sheppard capped off one of the most impressive seasons for any driver in Northeast Dirt Modified competition. Sheppard was dominate in any series he raced in and won the 2016 Race of Champions Dirt Modified Series title.
“This year has been incredible,” explained Sheppard. “Everything fell into place for us and I need to thank our entire team, all of our sponsors and everyone involved. Without all of their efforts, we wouldn’t be standing up here before you.”
Brad Rouse of St. Catharine’s, Ontario became the first-ever driver from Canada to claim a Race of Champions title winning the Dirt 602 Sportsman Modified Series crown.
“This is a cool night for us,” began Rouse during his interview. “I am very proud of what we were able to accomplish this season and this celebration is great, my family is with me, including my kids and I am very proud that we are able to celebrate this together.”
Joe Mancuso of Buffalo, N.Y., laid claim to the Race of Champions Big 10 Super Stock crown. In 2017 the Series will simply become the Race of Champions Super Stock Series. Mancuso was the only driver in the group who did not visit victory lane during the 2016 season, but based on his consistency he raced his way to the championship.
“We are just very proud of all that we accomplished to get here tonight,” Mancuso continued. “This has been a great season for all of us and I am very thankful to be a part of it and to have this honor, but I can’t wait to get back to racing in 2017.”
All champions received a Pilat Design Championship helmet, Hoosier Champion jacket, Pilat Design Champions sign, Sunoco Race Fuels jug and point fund contribution.
Several special awards were also presented. Chuck Hossfeld of Ransomville, N.Y., and Matt Sheppard respectively received the Most Popular Driver Award’s for their respective divisions as presented by Spee51.com. Each received a banner displaying their accomplishment and a free hero card design.
Also recognized where Chuck Tripp in the Super Stock Series with a Spirit Award and Sherwood Racing Wheels as a partner to the Super Stock Series and their continued dedication to the Series.
Daryl Lewis, Jr. of Ontario, N.Y., received the Most Improved Driver Award, while Bryan Sherwood of Owego of N.Y., was presented the “Hard Luck” Award and long-time Series

Official Jim Burleigh was presented with a Service and Series Dedication Award.

The Race of Champions is a sanctioning body presenting Modified and Stock Car racing on asphalt and dirt surfaces throughout the Northeast, with events in New York, Pennsylvania and New Jersey. The 67th annual Race of Champions weekend will take place in 2017 and is the second longest consecutive auto-racing event in North America, second only to the Indianapolis 500.